Why the Escalating “Trade War” Was Predictable

Protectionism is correctly recognized among economists of all stripes as destructive, yet there is always a call for it when people's mental state changes to a defensive psychology. The inevitable dampening effect on trade is inescapable. You will be reading about protectionism in the newspapers. [Emphasis added.]

Fast forward to the summer of 2017: That's when the U.S imposed duties on Chinese aluminum. However, the U.S. stock market, which is a direct reflection of social mood, was still rising. Therefore, last summer, there was little talk of a "trade war."

Yet, the September 2017 Elliott Wave Financial Forecast made this prediction:

"Other measures" included President Trump's March 1 announcement of tariffs on imported aluminum and steel. That's when we started hearing rumblings about a trade war. These headlines appeared in early April:

What had changed? Well, the U.S. stock market had topped in late January and went on to experience a rapid 10% selloff in February. Stock prices in China were also sliding.

This downward slide in stock prices in the U.S. and China indicated that "people's mental state" had indeed turned "defensive."

The trade conflict is now being discussed and even feared because negative mood has become dominant. It fits the Elliott wave model perfectly. [Emphasis added.]

Looking at history, we know that tough trade talk transitioned into the passage of the Smoot-Hawley Tariff Act in June 1930.

Is history about to repeat?

Well, it's best to keep a close watch on the Elliott wave model, which is sending a very important message.

Emotions: We all have them. But the push and pull of greed and fear can (and often does) trip investors up in financial markets.

The beauty of the Elliott wave model is that it helps you take emotions out of the picture. Clears them away.

What investors like you need -- especially at this historic market juncture -- is objectivity.

Our Elliott wave experts have been observing markets for more than FOUR DECADES and are ready to share their hard-won insights with you.

Read below to get more details …

Your Financial Forecast and Elliott Wave Theorist team includes three of the best-known market analysts in the world – Robert Prechter, Steven Hochberg and Peter Kendall. If you are familiar with Elliott wave analysis, you know exactly who they are.

No other analysts in the world, anywhere, undertake the depth of research that goes into these publications. Throughout the month, Bob, Steve and Pete sift through mountains of data, often studying 100 years of data or more. Why? Because a chart of the big, long term waves is the only way to know precisely where in the pattern we are today – and therefore, precisely where we are most likely to go next. 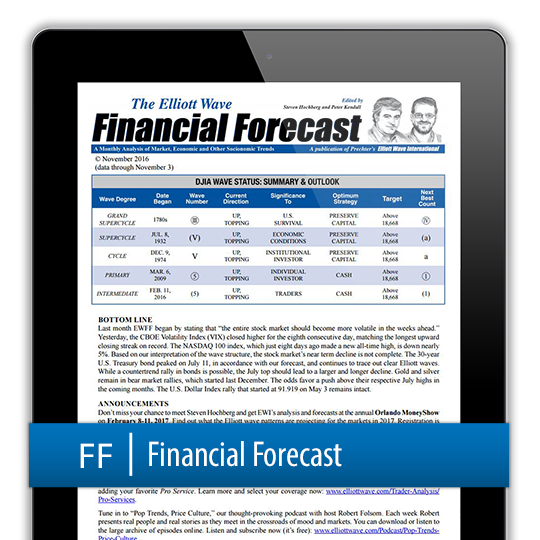 Every Month
At the end of each month, your team of analysts gets together and lets the sparks fly. The result? The Elliott Wave Financial Forecast. When you get a new issue, you can be sure it contains the most critical information you must know about the markets this month. 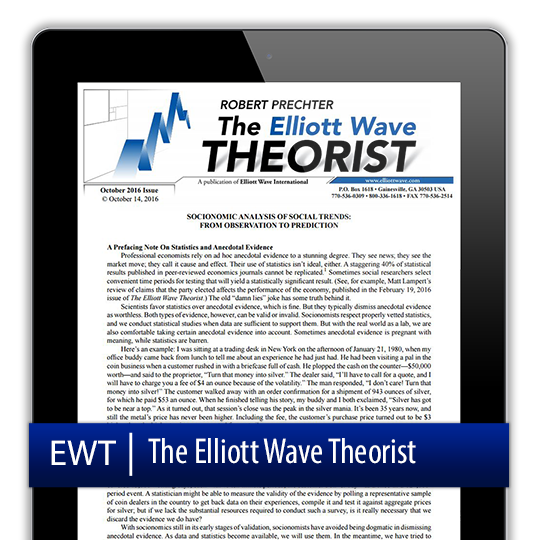 Latest Research
Once per month, Bob Prechter sends you his very latest research about Elliott waves in the markets and society. For 30+ years, The Elliott Wave Theorist has delivered more groundbreaking market research than any other publication on the planet. 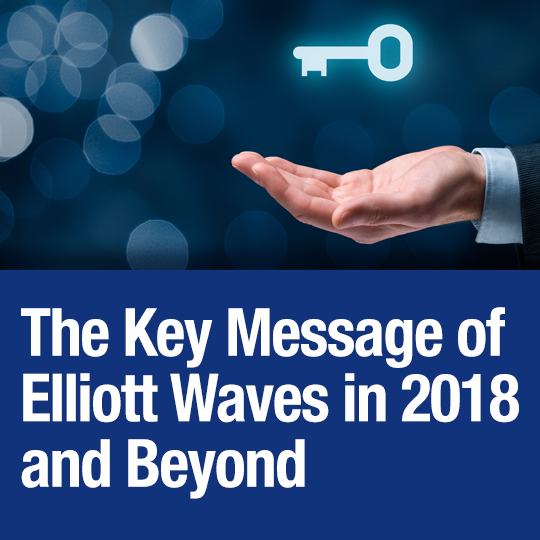 BONUS: The Key Message of Elliott Waves in 2018 and Beyond
In this 43 minute streaming video, Steve Hochberg discusses key forecasts for various markets in his presentation from the 2018 Orlando MoneyShow.

for two months of the Financial Forecast and Elliott Wave Theorist.