If oil sanctions are bullish, then why did crude plunge 40% in 2018 amidst Iran sanctions?

For the last year, news stories surrounding the global oil market have been characterized by more intrigue and tension than a James Bond thriller. The main plot: The U.S. uses its world power status to impose sanctions on oil-producing regions "X,Y and Z" in the attempt to punish foreign politicians from alleged murders and profiting off energy-related windfalls.

But don't let the drama distract you. At the end of the day, there's only one story that truly matters to oil investors. Namely, the increase of sanctions and thus, prospect of ever-tightening global oil supplies, has led to...

This is the exact opposite scenario than the one envisioned by the mainstrem experts.

It all began early last May, when U.S. President Donald Trump pulled the U.S. out of the 2015 Iran nuclear deal and announced the restoration of sanctions on OPEC's third-largest oil producer, to take effect on November 4, 2018.

Soon after, dominant nations China and India followed rank, ceasing their own purchase of oil from Iran. And on October 2, pressure reached a boiling point when the U.S. threatened sanctions against Saudi Arabia over the disappearance of U.S. Journalist Jamal Khashoggi.

Going into mid-October, crude oil prices stood at their highest level in four years. And, according to the usual suspects, the ongoing sanction drama ensured oil's path of least resistance was UP. Here, these October-November 2018 news items reset the bullish scene:

"Oil Could Hit $200 'or even double that figure': Saudi's Threaten to retaliate against any sanctions over Khashoggi disappearance." (Reuters)

"A hot streak in the oil market is setting off a wave of bets on how high prices can go. We continue to see price risks tilted to the upside... Oil traders have piled into wages that US crude oil could sure to $100 a barrel by next year, a milestone that until recently many considered unthinkable."

It stands to reason oil prices were driven by something other than sanctions. That "something other" is investor psychology, which unfolds as Elliott wave patterns directly on oil's price chart.

Ahead of oil's late 2018 selloff, on October 17, our Energy Pro Service identified a bearish Elliott wave setup on the weekly price chart of NYMEX crude oil (pictured below) and wrote:

"The higher probability view is to label Primary wave ((B)) as complete and look for a substantial decline to finish Cycle wave x.

"This is a good place to reiterate that the larger trend is down and that there is nothing to suggest that the decline has run out of steam." 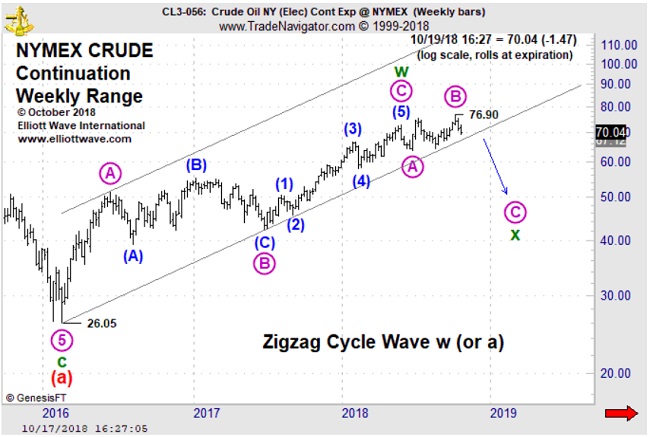 From there, oil embarked on its monumental decline. On November 8, the market recorded its longest losing streak in 34 years and continued falling into late December before settling 40% below its 2018 peak.

The chart below captures the market's sell-off from and Elliott wave perspective: 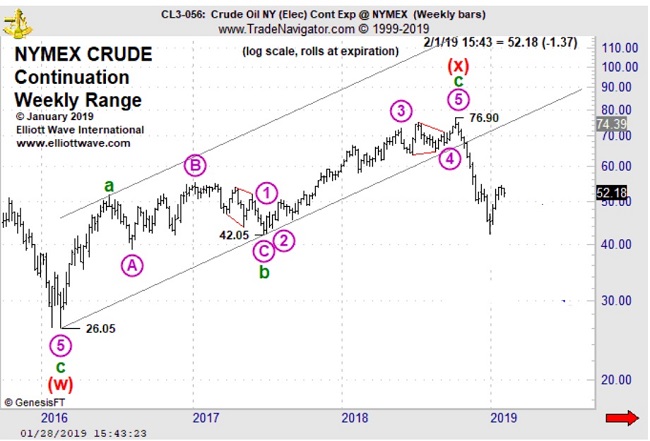 Today, once again, mainstream energy analysts have their antennae aimed at the most recent sanctions -- this time against Venezuela, holder of the world's largest oil reserves. Writes one January 29 NPR: "Oil Prices Edge Upward After US Imposes Sanctions on Venezuela."

Our Energy Pro Service, however, is tuned into the most important factor for crude oil's future: the Elliott wave pattern unfolding on the market's price charts right now, from intraday to monthly.

Riddle me this: The news is bullish, but oil and ETFs FALL.

Or, oil inventories are reported full, and prices RALLY.

As a trader, you see it all the time. If you sweep such "inconsistencies" under the rug, you’re missing the point.

Oftentimes, crude and natgas go where traders' psychology goes. And no other forecasting method lets you track this powerful force -- and forecast it -- as Elliott waves do.

What if you had someone in your corner to help you watch the waves of psychology in the energy markets in real time? Someone who stays alert even when you take a break? Whose job it is to help you catch the right move?

If it's a major energy market, we'll help you stay on top of it.

1. You Get Timely Intraday and Daily Forecasts

Your Energy Pro Service subscription puts a veteran energy market expert in your corner. His goal is to make sure that day-by-day, hour-by-hour, you see the very latest Elliott wave picture. You get intensive intraday coverage to help you catch near-term opportunities and daily forecasts that let you get in front of longer-term waves.

2. You’re Ready for All Probabilities with Video Overviews

Once a week or more, editor Steve Craig records new video market overviews to show you ALL Elliott wave counts for the Energy complex. You see his outlook in detail – plus, any strong alternatives that may enter the picture. Result: You’re prepared to act on all probabilities.

Context is key. Your Energy Pro Service subscription gives you big-picture analysis to help you ride major trends – trends that can last years. This essential perspective puts the near-term moves into context. Together, you get a comprehensive Elliott wave picture for the energy markets at every degree of trend.

Personlize your Energy Pro Service package to get the coverage you need.