The way we see it, there isn't one -- otherwise, oil prices would be rising. But they aren't.

It's been one of those glued-to-the-internet-kind-of-weeks as unsettling reports of "geopolitical tensions" erupt across the globe.

The effects of the April 4 chemical weapons attack in Syria are universally felt. And our deepest condolences go out to the innocent victims of this explosive new wave of brutality.

But how these events, and the April 7 missile-drop retaliation by U.S. President Donald Trump affect financial markets is not so clear. According to mainstream financial wisdom, it's exactly these kinds of powerful news cycles that drive price trends. In this case, the market most affected is crude oil.

The consensus following the April 7 missile strike was that crude oil prices would benefit directly and immediately from growing tensions in the Middle East. Here, these news items from April 7 and April 8 paint the bullish picture:

On April 7, however, our Energy Pro Service put forth a very different opinion. There, our chief energy analyst Steve Craig warned that crude oil prices were set to weaken -- despite the rising tensions:

"Geopolitical events like last night's missile strike make good copy for market commentary, but they offer little (if any) insight for forecasting purposes. As a company, we've demonstrated time and time again the futility of basing a price forecast on 'news.'

"That's not to say that exogenous events can't garner a market reaction. They can and often do. Any impact, however, tends to be short-lived and I suspect that this will be yet another example.

"The new rebound high in overnight activity keeps the hunt going for the wave (ii) peak. If my count is on target, the market has no business trading above the 54.94 wave ((ii)) peak. At this point, I'll use trendline support as a guide, where a decisive breach should offer the first hint of a downward reversal." 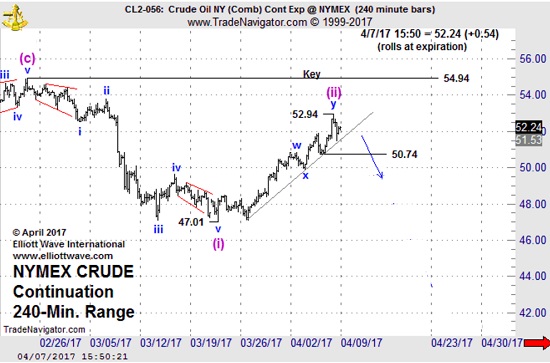 From there, oil prices continued to rally slightly before reaching a peak of 54.14 (basis June 2017 contract) on April 12. That day, the big-ticket news item in crude's backdrop was a new U.S. oil inventory report.

"The upcoming inventory report could induce some volatility, but the bottom line is all the same. Crude should be at the tail end of a lofty countertrend retracement."

That day, oil's uptrend ran out of steam and prices began to stall. In his April 18 Energy Pro Service update, Steve urgently prepped the bearish stage:

"Crude's decline below 52.71 in overnight activity hints that a downward reversal is underway. I'm looking for impulsive downside price action to strengthen the case. WTI should ratchet on down from the 53.76 rebound high in an impulsive manner."

The next day, on April 19, oil prices plunged 4% in its biggest daily percentage drop since March. Here, the chart below captures the broader view of crude's downside bias since peaking on April 12. 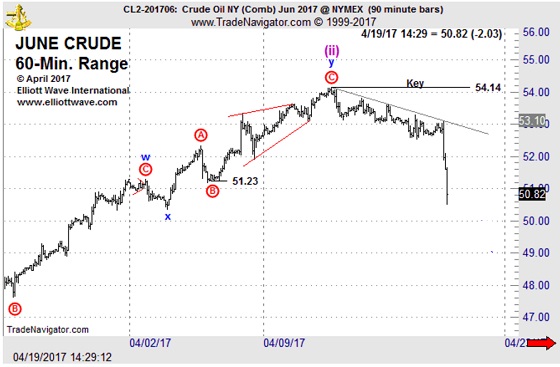 As for where oil prices are headed next -- don't look to the "news" for clues. Get instant access to our premier Energy Pro Service for FREE, right now. That's right! Our fan-favorite, Pro Service Open House is underway through Thursday, April 20.