In August, the fundamental future of the US Oil Fund was unknown. It's Elliott wave future, however, was clear as the day is long

William Shatner isn't the only one rocketing to the moon of late. Energy markets aren't far behind, says Wall Street, amidst what Forbes coined the "Oil Boom 2021" on October 18. Per the article:

The actor who played the pretend Captain Kirk gets shot into real outer space meanwhile a robot trader ditches tech stocks in favor of -- you guessed it:

From the Barron's article:

"An asset manager whose stocks are picked by artificial intelligence dumped shares in Facebook this month, as it made massive bets on U.S. energy companies."

Suddenly, truth feels stranger than fiction. But one thing that holds true among today's energy traders is a love for energy-backed exchange traded funds. In particular, the world's largest energy ETF the US Oil Fund (USO), which soared to a one-year high on October 20.

"Every ETF on this list, with the exception of only a few, are tied to the energy sector in some way."

But while earthlings and robots alike are hopping on board the energy bull wagon now -- as recently as August, the mainstream energy outlook was vague at best.

At that time, energy markets were licking their wounds from an across-the-board summer sell-off, with USO circling the drain of a four-month low.

Expert opinion lost count of the growing unknowns lurking in the energy sector's fundamental backdrop, including:

In turn, there was no clear way to gauge the sector's future. Here, one August 19 ETF report wrote:

"Crude oil and crude ETFs are under pressure once again, falling for a sixth consecutive session on Thursday.

"There are still too many question marks over the crude demand outlook over the next few months and that will weigh on crude prices."

Yet, while fundamental analysis was shrouded by unanswered questions, Elliott wave analysis of US Oil Fund was able to discern a clear trend change; namely, one to the upside. On August 23, our Energy Pro Service published this chart of USO, which identified the start of a move higher. That move would either be a shortened, post-triangle thrust -- OR, as the alternate labeling suggested, the start of a fifth wave rally.

In either case, Energy Pro Service stressed this key point: "USO has no business below 43.33." 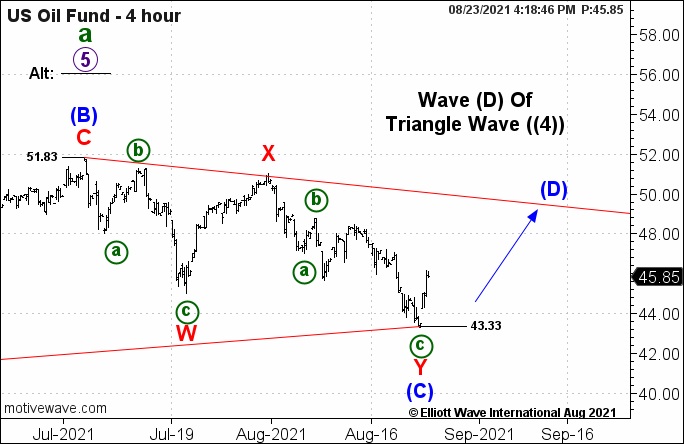 From there, USO progressed higher and on September 15, our Energy Pro Service showed this updated price chart, confirming that the move up was indeed a developing fifth wave. Per our analysis:

"I've adopted the alternate count labeling Primary wave ((4)) as complete at the August low. If the Primary wave ((5)) advance is underway as surmised, the USO should stay above (preferably well above) Tuesday's 49.04 low and ratchet on up in third-wave fashion." 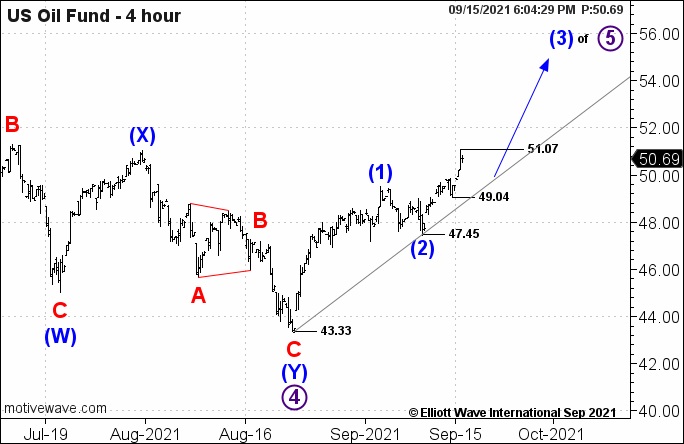 And, this chart captures the full extent of USO's rally into October 20: 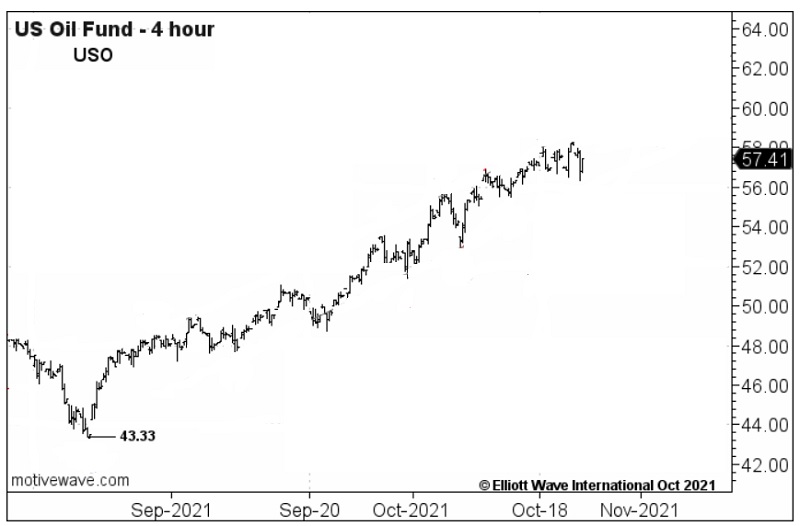 In the famous words of Captain Kirk, a.k.a. William Shatner, "To Boldly Go Where No Man Has Gone Before" is the mark of true courage.

Right now, traders have a choice: To follow the herd -- or, to take a step toward a new way of analyzing the markets they follow. Our Energy Pro Service is here when you're ready.

Pinch-Me Moments Ahead for Energy Traders!

If it's a major energy market, we'll help you stay on top of it.

1. You Get Timely Intraday and Daily Forecasts

Your Energy Pro Service subscription puts a veteran energy market expert in your corner. His goal is to make sure that day-by-day, hour-by-hour, you see the very latest Elliott wave picture. You get intensive intraday coverage to help you catch near-term opportunities and daily forecasts that let you get in front of longer-term waves.

2. You’re Ready for All Probabilities with Video Overviews

Once a week or more, editor Steve Craig records new video market overviews to show you ALL Elliott wave counts for the Energy complex. You see his outlook in detail – plus, any strong alternatives that may enter the picture. Result: You’re prepared to act on all probabilities.

Context is key. Your Energy Pro Service subscription gives you big-picture analysis to help you ride major trends – trends that can last years. This essential perspective puts the near-term moves into context. Together, you get a comprehensive Elliott wave picture for the energy markets at every degree of trend.

Personlize your Energy Pro Service package to get the coverage you need.