There's more to this market than weather patterns

Before we begin today's story, we'd like to extend our sympathy to everyone affected by the devastating fallout of Hurricane Harvey. Our hearts are with you.

Hurricane Harvey is one of -- if not the costliest -- natural disaster in modern history and the most powerful hurricane to hit the U.S. oil-producing hub of Texas in half a century.

In its aftermath, an estimated 16% (and growing) of total U.S. oil refining capacity was left idle.

From a "market fundamental" point of view -- one that views news as the main driver of market trends -- Harvey was the ultimate bullish catalyst for crude oil prices, echoed by these and countless more news items:

And this one, from the August 27 Reuters, which suggests Mother Nature is more capable of engineering a price-supportive supply deficit than the organization that controls over half of the world's oil production --

Except that, instead of rallying in Harvey's wake, crude oil prices have been relentlessly weak -- sinking more than 4% since the landfall to one-month lows.

Now, let's examine the recent performance of crude oil from a different perspective, one where price moves are based on something beyond weather patterns. Specifically, investor psychology, which unfolds as Elliott wave patterns directly on a market's price chart.

Here, the downtrend in oil begins long before Harvey was even a blip on the Doppler radar, at the August 9 high at 50.22. One day after, on August 10, in his Energy Pro Service, our senior energy analyst Steve Craig warned that oil's larger trend had now turned down:

"The break below 48.90 argues for labeling wave ((ii)) as complete with a slightly truncated (and short) wave v of (c). If this is the correct interpretation, the entire complex should roll on over and trend down in an impulsive manner." 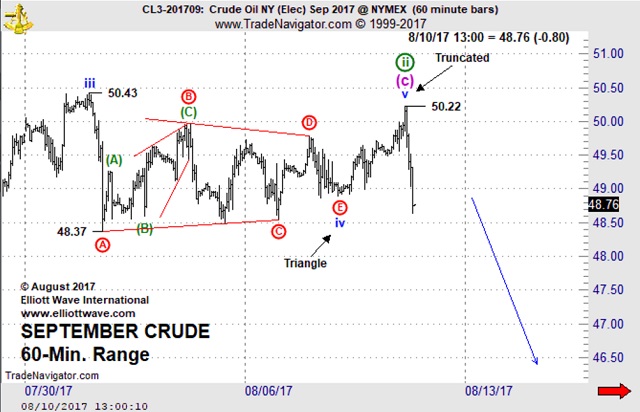 Crude oil prices sold off precipitously into the August 17 low of 46.46. On August 18, in his Energy Pro Service, Steve allowed for a temporary bounce before the market recommitted to the downside:

"The decisive break above trendline resistance adds credence to the leading diagonal scenario. A push above 47.99 will strengthen the case. Above there resistance is located at 48.34... and then 48.78." 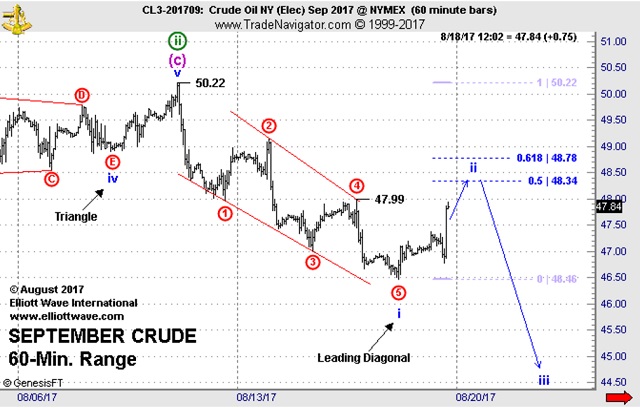 Prices indeed rallied to cited resistance at 48.78. On August 21, in his Energy Pro Service Steve confirmed a top was in place and greased the wheels for the downside once again. Note: Steve's bearish forecast came four days before Harvey made landfall on Friday August 25 at 9:45 pm.

"A solid break below trendline support along with a five-wave drop below 46.78 will add credence to the idea that a third wave is underway." 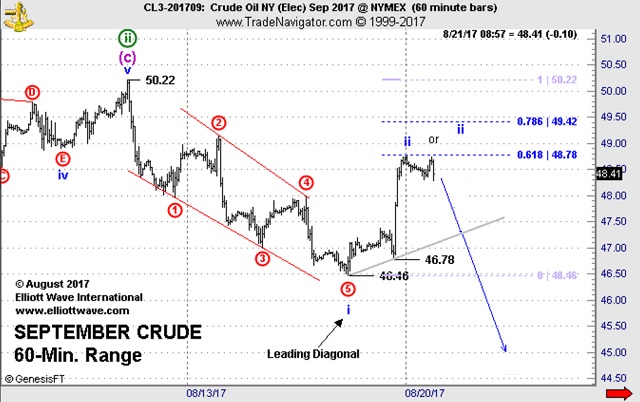 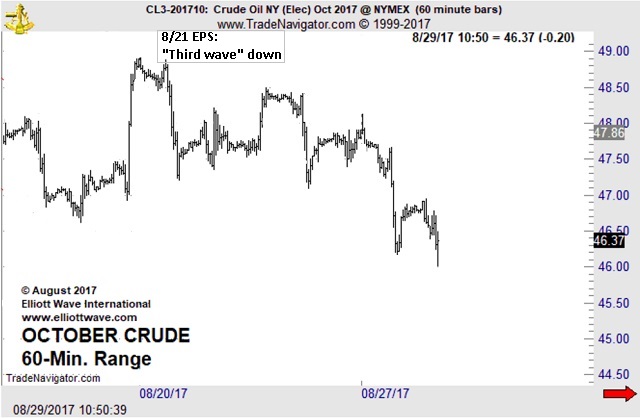 The charts prove one thing: Not even a "once in 100 year" storm could change the already entrenched bearish mindset of the marketplace. Here, on August 28 in his Energy Pro Service, Steve settles the Harvey-oil connection:

"I want to start by expressing my deepest condolences to everyone in Hurricane Harvey's path -- a nightmare that no one should have to endure.

"Fundamentally speaking, Harvey has dominated the news cycles -- and rightly so, given the ‘catastrophic' flooding along the energy-rich Texas Gulf Coast. Nearly a third of the country's oil refining capacity is located between Corpus Christi, Texas and Lake Charles, Louisiana, much of which lies in the storm's path.

"If 2005's Hurricanes Katrina and Rita or 2008's Hurricane Ike that also struck energy-rich sections of the U.S. Gulf Coast are any guide, hurricane-related strength will fade into weakness -- the market's normal response to bullish ‘news-driven' events in a bear market.

"From an Elliott perspective, I've bumped the wave degrees up a notch, but Harvey didn't change the outlook for a resumption of the decline."

As for the oil's next big move, Steve's Energy Pro Service sheds critical light on the "next big hurdle" oil prices must cross to confirm the market is still on the bearish track.