The 2007-2009 financial crisis is a faded memory for many investors.

Of course, that was not only a period when stock values tanked, but when big companies like AIG, General Motors and Chrysler fell into bankruptcy, and even quasi-government entities like Fannie Mae had to be placed into "conservatorship," an unprecedented move.

Many of the other bankruptcies were financial names. The biggest one was Lehman Brothers, but there was also Washington Mutual, CIT Group and many other financial and mortgage companies.

So, what does then have to do with now?

Well, in Germany, there's a big reminder of what happened about a decade ago with the nation's largest bank.

Last year, our July 2018 Global Market Perspective sounded the alarm in a special section titled, "Frankfurt, We Have a Problem!": 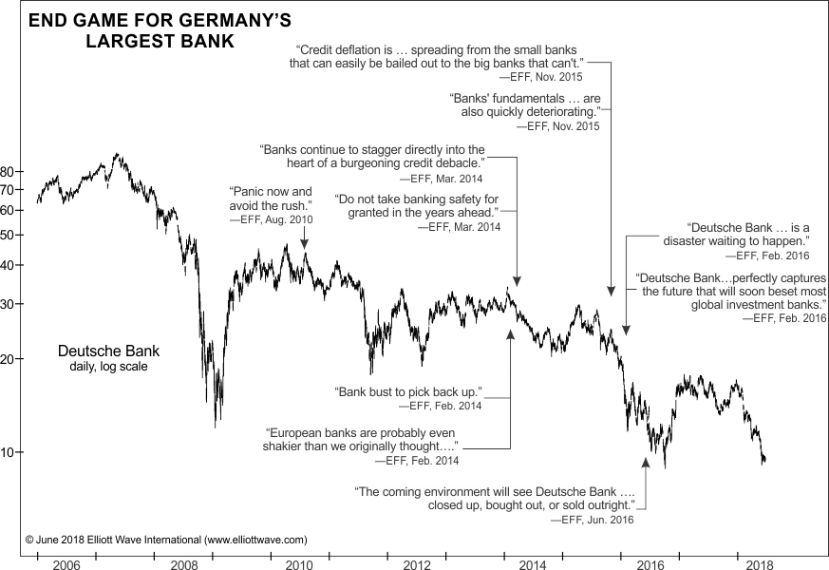 Deutsche Bank ... inched toward nine euros per share last month, representing a 71% decline since our 2014 forecast and a 90% drop since the bank's May 2007 all-time high.

The arrows on the graph highlighting our past warnings about Deutsche Bank also illustrate the dangers of trading based on fundamentals, which have only just now caught up with the company's weak stock price. In February, for example, prices slid 11% in a single day when Deutsche Bank announced a seven-year low in revenue and major declines in two of its core businesses, banking and equity derivatives. By May 2018, the bank was slashing jobs and announcing that it would downsize, and scale back trading operations in U.S. interest-rate trading and corporate finance.

And this is from a July 8 CNBC article:

Deutsche Bank shares slumped more than 5% as the German lender announced a mass restructuring program. The bank will see 18,000 jobs cut by 2022 and the closure of its global equities sales and trading business in a bid to improve profitability.

Our Global Market Perspective subscribers were prepared almost a year ahead of time.

Keep in mind that the DAX -- Germany's main stock index -- has been trending higher in 2019. Imagine what Deutsche's stock price will do if the DAX turns lower.

With that in mind, the July issue of our Global Market Perspective provides a "must see" chart of the DAX, along with insightful commentary.

You're invited to review our comprehensive Global Market Perspective without any obligation for 30 days. Look below to learn how to get started.

Why You Should Watch GLOBAL Markets Too

It's no surprise that many investors pay attention to U.S. financial markets, but …

… huge investment opportunities are waiting for your attention elsewhere around the globe.

Indeed, the Elliott wave model suggests that some are what you may call "low-hanging fruit."

See these compelling chart patterns for yourself in our Global Market Perspective.

With 50-plus pages each month, you get coverage of more than 40 markets, including energy, forex, stocks, bonds, precious metals and more.

Get started with EWI's no-obligation offer by reading below …

Why the Future Looks Precarious for This Global Technology Index

European Stocks: Look at "Parts" to See the "Whole"