This is Part 6 of an 8-part series of short articles by EWI's Head of Global Research, Murray Gunn. Murray is based in London, where he documents European hot-button issues in great detail. Murray also views the world and forms his conclusions from a social-mood perspective. It's an eye-witness series you don't want to miss.

A Decisive Moment for Europe: Part 6

Britain elects Members of the European Parliament next week, but those Members may not take their seats. Can things get any weirder?

My home, and millions of others across Europe, will be partying tomorrow night as the Eurovision Song Contest takes place. The annual event, where each country representative sings and every other country votes, dates back to 1956.Notable past winners include ABBA and Céline Dion. In recent years, Eurovision has become a haven for a young, pro-European generation and has become a byword for kitschy, slightly campy fun. But get this -- you think that only Americans are challenged in geography? Tomorrow's Eurovision contest takes place in Israel and includes an entry from Australia! And if you think that's weird, just look at Great Britain.

Next Thursday, we Brits go to the polls to elect our representatives to become Members of the European Parliament. However, at this juncture, the United Kingdom (U.K.) is set to leave the European Union (E.U.) on October 31 this year. So the U.K. MEPs will only take their seats for a matter of weeks, if indeed they take them at all. If, by some miracle, the British Parliament can agree to pass an E.U. withdrawal bill before the end of June, the MEPs will not even be required to hop on the Eurostar train from London to Brussels. At this juncture, that seems unlikely, as cross-party talks have broken down and the ruling conservative party is about to sack Prime Minister Theresa May and replace her with someone sympathetic to those who want Britain to leave without a deal. However, Parliament will probably not pass a "hard-Brexit" bill and so it looks increasingly likely that some form of second referendum is going to have to be held as a way out of the impasse. A general election is another potential outcome.

With all this chaos, yet another bizarre turn of events is that the party leading in the polls for the European Parliament is one that doesn't even want to go there at all. The newly-formed Brexit Party is the brainchild of ex-U.K. Independence Party (UKIP) leader Nigel Farage. The party's stated aim is to deliver Brexit, tapping in to the disgruntled leave vote, and the latest polling shows that the Brexit party is likely to sweep the board next week, winning the majority of U.K. seats in the European Parliament. It's a tremendously fluid situation and so the next few months will be fraught with uncertainty.

For socionomists, uncertainty is our stock in trade. Financial market pricing looks forward in time and, because it follows predictable patterns, enables us to anticipate events. The chart of EUR-GBP shows that the triangle pattern is ongoing and still has some way to run. This means that we can anticipate a few more months of sideways trading. However, the resolution to this triangle should be a strong upward thrust in EUR-GBP, indicating a depreciating British pound. Does that mean that Britain eventually crashes out of the European Union without a deal? Quite possibly. 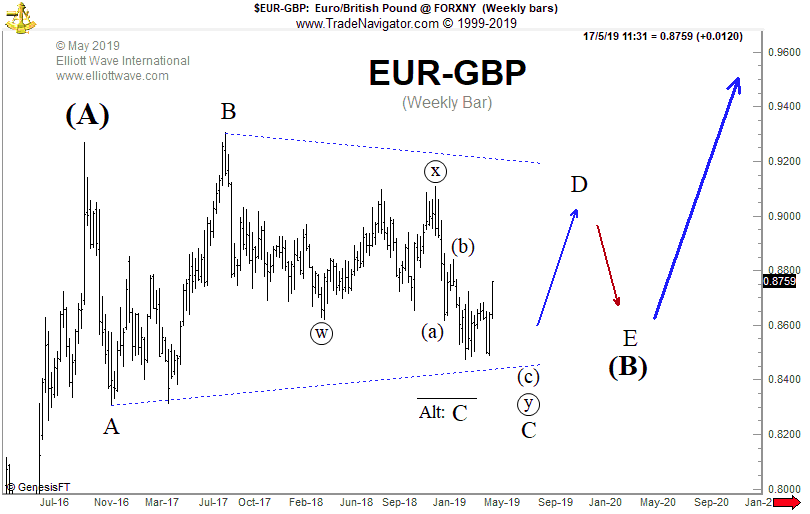 Every Crisis Is an Opportunity.

A Market Opportunity for Astute Investors.

As you're reading Murray Gunn's eye-witness account of the issues jeopardizing Europe today, ask yourself:

"Which markets will fall -- and which ones will rise -- as this story unfolds?"

We can help you get well-researched, objective answers that are not based on the perpetually late-to-the-game "fundamentals."

Our publications are well-known for giving subscribers one-of-a-kind, Elliott wave-based insights into new risks and opportunities around the globe.

Choose a subscription below and continue to get Murray's eye-opening analysis, risk-free...

Get a grasp on European markets

Germany’s DAX: “What Happens When the ECB’s Money Pump Stops?”

See This “Anatomy of a Bursting Bubble”

Are Covid Lockdowns Bullish or Bearish for Stocks? FTSE 100 in Focus.

The Slow European Dissolve: Social Mood and the EU