How the Danger of Debt Looms Large

"It costs significantly more to borrow than it did just 24 months ago."

Being debt-free is desirable at any time in life.

But, this is a particularly good time to take the steps that are necessary to become debt-free.

The reason is simple: Borrowing costs are rising. Moreover, if a severe economic contraction were to occur, interest rates may climb a lot higher as the credit market becomes defensive.

Consider this chart and commentary from our April Elliott Wave Financial Forecast: 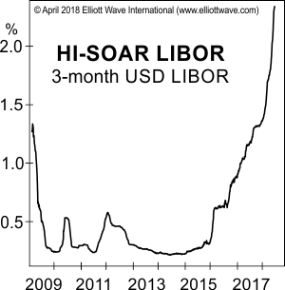 The Libor rate is now at its highest level in 9½ years. The London Interbank Offered Rate is used as a benchmark reference rate for other financial debt instruments globally, such as mortgages, student loans and credit cards, to name just a few. ... [I]t now costs significantly more to borrow than it did just 24 months ago. Libor has nearly quadrupled over this period, and with outstanding debt at record levels, investors are already feeling the squeeze intensely.

Speaking of student loans, consider a head-shaking example of how big of a weight that debt can become in a person's life. This is from CNBC (May 5):

For some, student loan debt is doubling, tripling, and even quadrupling

"... it really does happen all the time," said [the] director of the Student Loan Borrower Assistance Project at the National Consumer Law Center ..."

"There are ways these loans are structured that encourage this ballooning."

This "structuring" involves postponement of payment. As the CNBC article also notes, one former law student's $55,000 student loan eventually turned into a debt of over $300,000!

On the same note, U.S. credit card debt reached its highest point ever in 2017, surpassing $1 trillion, according to the Fed.

Of course, there are many other forms of debt, including the national debt, which exceeds $21 trillion dollars -- and counting.

Plus, as you may know, the financial picture of many local governments is in shambles. Indeed, the April Elliott Wave Theorist offers more than 270 specific predictions, and here are just two:

That issue of the Theorist also tells you how high interest rates on corporate and municipal bonds are expected to rise.

Now is the time to learn ALL of our forecasts and prepare for what we see ahead.

Why Are So Many Investors on the WRONG SIDE of the Market at Major Turns?

BUT -- the news is not an indicator of future prices -- it's a reflection of of the past.

Put yourself on the RIGHT SIDE of the stock market's trend by learning what our Elliiott wave experts are saying.

Find out more by reading below …