Municipal Bonds: Still "on Track for a Train Wreck"

The bond market is not waiting for ratings agencies to act

The head of credit research for a municipal-bond management firm just commented: "We haven't seen this in a modern state before." He was talking about Illinois' deep fiscal trouble. Look at the eye-brow-raising credit spread.

The bull market in stocks has lasted more than eight years, yet the finances of many U.S. municipalities are in bad shape.

The fiscal health of Illinois is especially troubling -- and it didn't happen overnight.

Munis “remain on track for a train wreck.” … As the spread between 10-year AAA Muni-bond yields and 10-year U.S. Treasury yields began to expand from its most recent narrow reading, the state of Illinois highlighted the potential for a full-scale flight from munis by postponing its latest bond issue. With $9 billion in unpaid bills, Illinois is obviously up against a wall of concern … . A second attempted bond sale was also pulled, as Illinois couldn’t afford to pay the interest rate needed to attract buyers.

Keep in mind that the widening yield spread between the two bonds mentioned meant that investors were growing worried about the ability of municipalities to service their debt. Therefore, investors demanded a higher yield for assuming the risk.

Today, the amount of Illinois' unpaid bills has grown even higher.

Here's an update from our June 2017 Elliott Wave Financial Forecast: 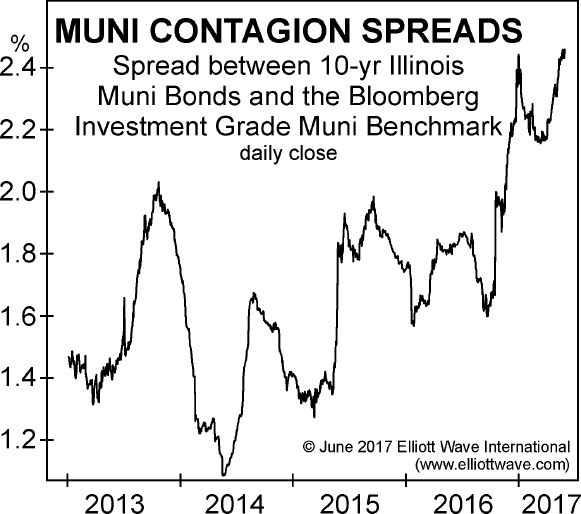 The State of Illinois has a record $14.5 billion of unpaid bills; it’s already affecting the price of its municipal debt. …  The current budget debacle has left Illinois on the cusp of losing its investment-grade status, which would be the first state since 1970 to do so. S&P Global Ratings just cut the state’s bond rating to one step above junk. As usual, the market is not waiting for rating agencies to make their move. The spread between the yield on 10-year Illinois muni bonds and the equivalent yield on a 10-year Bloomberg AAA muni benchmark has widened to 2.50%, the largest spread of any state bond relative to this benchmark and more than twice as wide as that for New Jersey, which has the second-worst state spread.

The head of credit research for a Chicago-based municipal-bond management firm commented on Illinois' deep fiscal trouble (Bloomberg May 31):

"We are probably approaching that point of impaired ability to function at basic level.  We’ve already probably passed that point. We haven’t seen this in a modern state before.”

Yet, according to our analysis, "many more states and their muni bonds will experience similar fates" during the next financial downturn.