Evidence shows that the bond market is in control of rates, not the Fed

Most financial observers believe that the Federal Reserve holds great sway over the economy and stock market through their interest rates decisions.

If true, that would be an awesome amount of power.

But, setting aside the entire economy, it looks like the Fed is having trouble with its own portfolio (Bloomberg, Dec. 12):

The Fed had losses of $66.5 billion on its securities holdings on Sept. 30, if it marked them to market. That dwarfed its $39.1 billion in capital, effectively leaving it with a negative net worth on that basis, a sure sign of financial frailty if it were an ordinary company.

If an institution lost so much money in the bond market that it sank to a net worth of minus $27 billion, would you trust it to tell you where interest rates are headed?

You see, the widespread assumption that the Fed determines the trend of interest rates is false.

The evidence shows that the Fed does not act; it reacts. It reacts to the bond market. In other words, the bond market leads the way on rates, not the Fed.

Robert Prechter's 2017 book, The Socionomic Theory of Finance, provides a historical example when it showed this chart and said: 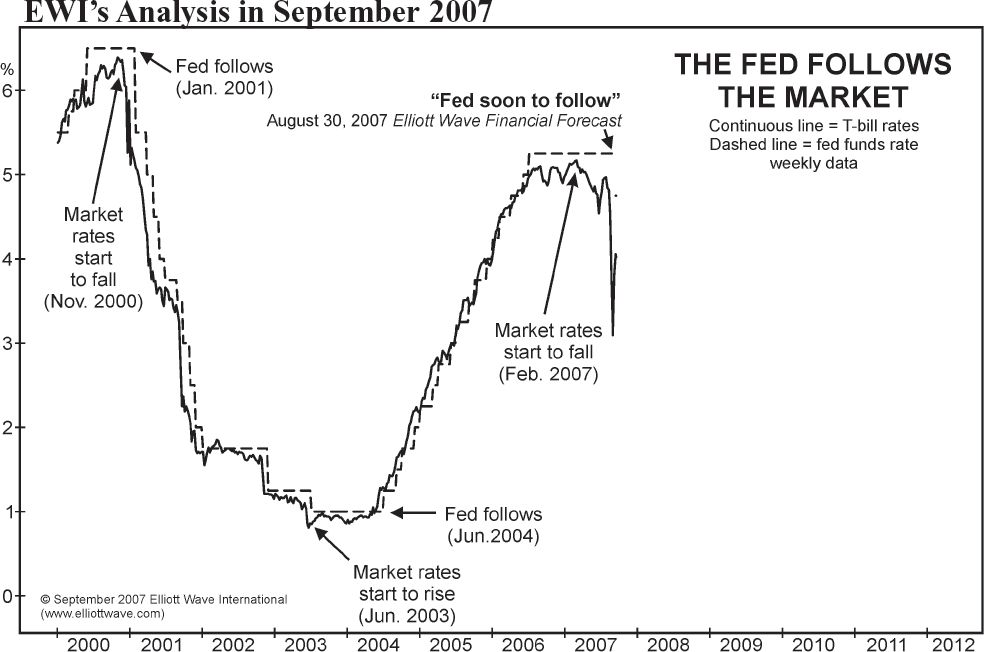 No one monitoring the Fed's decisions can predict when T-bill rates will change, but anyone monitoring the T-bill rate can predict with fair accuracy when the Fed will change its funds rate. The Elliott Wave Financial Forecast demonstrated this ability in September 2007 by predicting that the Fed was about to lower its federal funds rate dramatically.

The aftermath is shown in this chart: 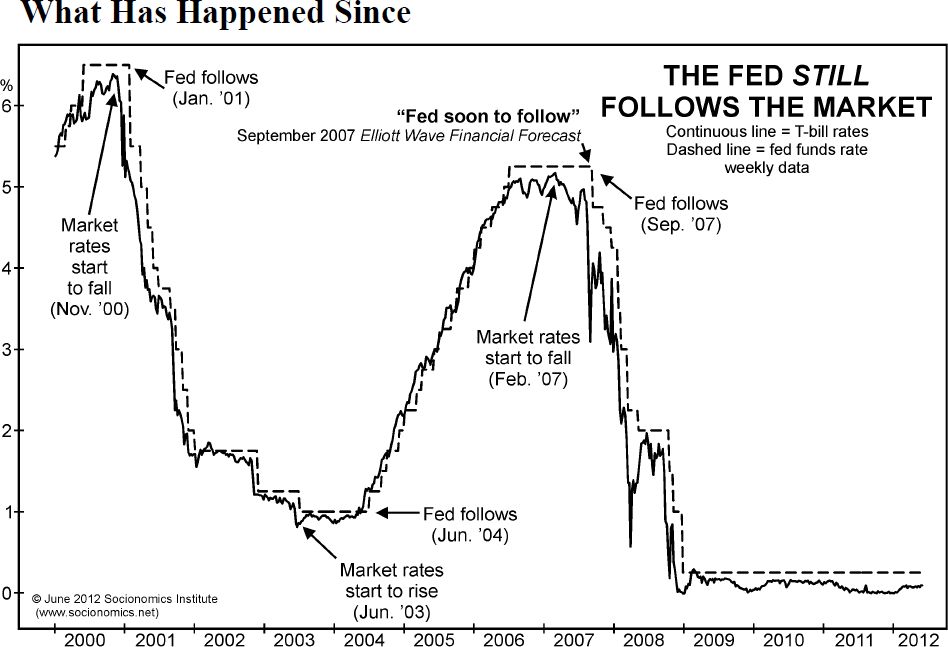 As you can see, the Fed's benchmark rate followed the T-bills rate lower.

This pattern maintained even during the dramatic period of double-digit rates in the late 1970s and early 1980s.... T-bill rates peaked four times in 1980-1982. Each of those peaks occurred a month or more before subsequent and reactive peaks in the federal funds rate. The Fed's rate also lags at bottoms, [such as] the lows of 1980, 1981 and 1982-3.

So, regarding interest rates, it's best to monitor the bond market, not the Fed.

And, that's exactly what our flagship Financial Forecast Service is doing.

Learn how to get our latest insights on interest rates, risk-free, just below.

Stressed Out From Facing the Market By Yourself?

Ease your mind by putting our team of Elliott wave experts on your side.

Backed by decades of market experience, they can HELP YOU navigate the market's volatility.

You don't need more stress, so we make your decision to try our Financial Forecast Service easy as pie by offering you a risk-free trial.

Look below to learn more …