The Junk Bond Market's Message is Loud and Clear

As noted before in these pages, the Elliott wave model is a direct reflection of the repetitive patterns of market participants. The psychology of the "crowd" swings from optimism to pessimism and back in a natural sequence.

Hence, if sentiment measures show extreme pessimism, expect the start of a swing toward optimism to begin, sooner or later. If investors are highly optimistic, that's usually not the time to place big bullish bets because the start of a bearish trend is often just around the corner.

With the above in mind, consider the notable investor optimism in the total return of the lowest-grade debt. Here's a chart and explanation from our May Elliott Wave Financial Forecast: 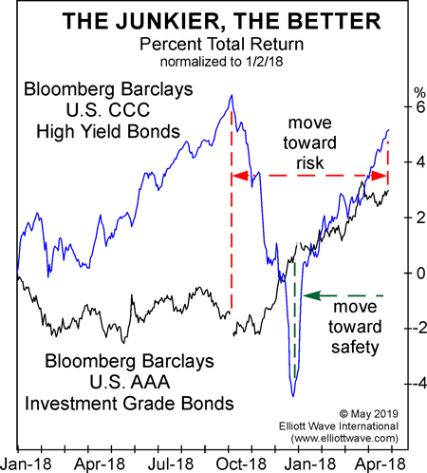 Our observations over the years show that junk bond complacency usually correlates with stock market complacency.

Stocks at Record Highs Hold a Lot of Appeal

That's why our subscribers were not surprised by the recent stock market selloff, considering the high-degree of financial optimism that was in place.

By the early morning hours of May 13, Bloomberg had an entirely different headline:

As you probably know, by the end of the trading day on May 13, the S&P 500 index sank nearly 70 points, which was its 15th-biggest point decline in history. The DJIA plummeted 617 points.

The question now is: How long will the volatility last?

Junk bonds are just one market that sends a loud and clear message to help you answer this question. In fact, we track over 100 different market indicators, many of which you won't find discussed in the mainstream financial press.

Get our unique insights from our in-depth Financial Forecast Service, risk-free for 30 days. Look below for details on instant access.

Does It Surprise You That News is IRRELEVANT to Stock Market Trends?

The mainstream financial press would have you believe otherwise. On any given day, market action is "caused" by news or events, according to a parade of talking heads.

You see, EWI's exhaustive research reveals no correlation between the stock market and earnings, interest rates, politics, trade deficits or even major acts of terrorism. Not even a presidential assassination!

Oh, sure -- a brief, emotional spike may follow a big event. But after a very short time, the established trend continues.

The key is to KNOW THE TREND.

Let our analysts share that information with you. This will put you a big step ahead of those who rely on the financial press for their portfolio decisions.