Why you should question "investment grade" corporate bond ratings

Elliott Wave International has been warning for years that investors cannot rely on ratings from credit agencies.

You would think that these harsh lessons would have prompted an about-face with the way credit agencies rate the bonds of companies.

But, believe it or not, even today, the bonds of many corporations which are in a precarious financial position enjoy investment grade status.

Bloomberg News delved into 50 of the biggest corporate acquisitions over the last five years.

By one key measure, more than half of the acquiring companies pushed their leverage to levels typical of junk-rated peers. But those companies, which have almost $1 trillion of debt, have been allowed to maintain investment-grade ratings by Moody's Investors Service and S&P Global Ratings.

The Bloomberg article also offers insights as to why many of these firms can side-step "junk status":

"The rating agencies are giving companies too much wiggle room," said... a money manager at Columbia Threadneedle Investments. "There's been some pretty heroic assumptions around cost savings and debt repayments laid out by some borrowers involved in mergers."

Speaking of mergers, the November Elliott Wave Financial Forecast showed this graph of global M&A activity at a new high, and made comment on those "heroic assumptions": 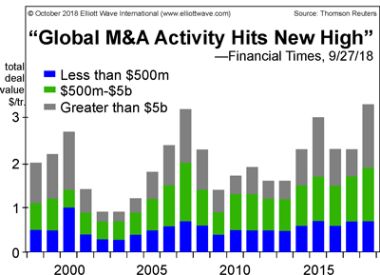 As usual, heroic bull market assumptions will morph into asinine risks in the bear market. This will happen shortly after a shocking bout of illiquidity makes selling off divisions and product lines all but impossible.

So, how close are we to this "shocking about of illiquidity"?

Find out what our Financial Forecast Service has to say. You will learn how many investors are ignoring "tried and true signals" in today's corporate bond market.

Prepare now for what will take most investors by surprise.

Look below to learn how to take advantage of our 30-day, risk-free trial.

EWI's Research Shows That "Mom and Pop" Investors Are Totally …

… unprepared for the next major financial downturn.

The January 2019 Elliott Wave Financial Forecast did some digging, and showed subscribers that Charles Schwab's clients’ cash-to-assets ratio fell to a record low 10.3% in September.

Of course, this means that nearly 90% of their Schwab portfolio is invested in risk-assets.

Right, even after all the volatility in Q4 of 2018, Main Street investors still have little to no fear of risk!

That is what's scary.

Now is the time to learn what our Elliott wave experts are saying about financial markets.

Read below to find out how to get started …