This is Why Municipal Bonds Are No "Day at the Beach"

Even during a national economic expansion, many U.S. municipalities are financially troubled. "Two out of every three states took in less tax revenue than expected this year." This chart of muni bond yield spreads will make you wonder about the future.

It's good to be king -- or, in this instance, governor of a state.

You might have seen the news footage of New Jersey Governor Chris Christie lounging with his family along a deserted New Jersey beach over the Independence Day holiday weekend. The governor's summer residence at Island Beach State Park was in the background.

Even though Christie announced he was going to the beach beforehand, it probably wasn't the best public relations move.

You see, the beach had been closed to the public and here's the reason why (The New York Times, June 30):

The New Jersey state government was forced to shut down at midnight on Friday, as the State Legislature remained locked in a standoff with Gov. Chris Christie that left them unable to agree on a budget plan.

The New Jersey budget deadlock was broken in time for the public to hit the beaches on July 4, but still, the state is in a fiscal mess. According to Standard and Poor's, Illinois is the only state that has a lower credit rating than New Jersey, which ties into this chart and commentary from the just-published Elliott Wave Financial Forecast: 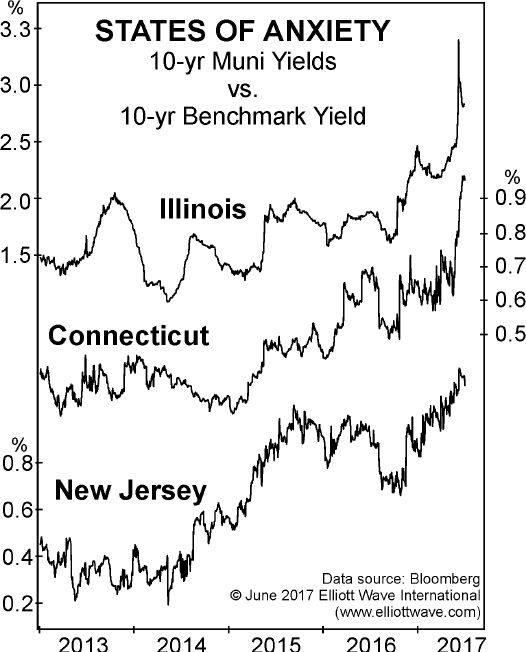 The growing financial stress is revealed in the widening spread between the yield on 10-year Connecticut and New Jersey muni bonds and the equivalent yield on a 10-year Bloomberg AAA benchmark; they are trending closely with that of Illinois. … Two out of every three states in America took in less tax revenue than expected this year, making it nationally "the worst performance since the depths of the recession …." The current financial distress is occurring during an 8-year economic expansion. What happens to state revenues when U.S. GDP starts to contract?

The prospects are sobering.

As far back as 2002, Robert Prechter offered these comments in his book, Conquer the Crash:

[Governments] spend and borrow throughout the good times and find themselves strapped in bad times, when tax receipts fall. … When the bust occurs, governments won’t have the money required to service truly needy people in unfortunate circumstances.

Of course, the U.S. did experience a GDP contraction in 2008-2009, fulfulling Conquer the Crash's forecast, and another contraction might still be down the road.

A good way to prepare for the fiasco that we see ahead for U.S. municipalities is to keep an eye on the market's Elliott wave pattern.

History shows that the economy follows the stock market. So, some months after the market turns down, we expect that historic contraction in U.S. GDP.