Why Renewed Danger Lurks in the U.S. Leveraged Loan Market

In investing, one rule of thumb tells you that the higher the return, the higher the risk. Today, one high-yield debt instrument that was at the forefront of the 2007-2009 financial crisis has reached a new, dangerous milestone. We're sounding the alarm -- again.

Hardly anyone foresaw the 2007-2009 financial crisis. However, Elliott Wave International had been sounding the alarm about lax credit standards as a warning of the approaching market peak months before the worst unfolded.

Through the first six months of the year, Elliott Wave International observed a succession of climactic credit events from the bludgeoning of the subprime mortgage market to a booming demand for "covenant lite" commercial loans ... . The Elliott Wave Financial Forecast identified these events as the set-up to the onset of a new conservatism that would drive the greatest credit crisis in history.

As we now know, over the next two years, the subprime mortgage meltdown morphed into the biggest financial crisis since The Great Depression. As you'll probably recall, a landmark event was the implosion of Lehman Brothers.

Many people know that subprime mortgages are loans to borrowers with poor credit histories. Some people, however, may not be familiar with "covenant lite" commercial loans... but they are basically the same thing.

As we've explained to subscribers, cov-lite loans free the debt issuer from meeting normal fiscal disclosures and financial metrics, such as debt-to-asset ratios, which usually accompany the sale of these loans. Buyers of these bonds have little to no way of protecting their investment should the issuing company run into financial trouble. In a nutshell, they are high-risk debt instruments. Think "sub-prime" for commercial borrowers.

Even so, investors are attracted to cov-lite loans because they pay higher interest than investment grade debt.

The fact that there are no covenants tells you that people are substituting yield for credit judgment.

In other words, investors were so hungry for yield that they were willing to brush aside the risk involved with Nine West's debt.

With all of the above in mind, consider this covenant-lite update from our just-published June Elliott Wave Financial Forecast: 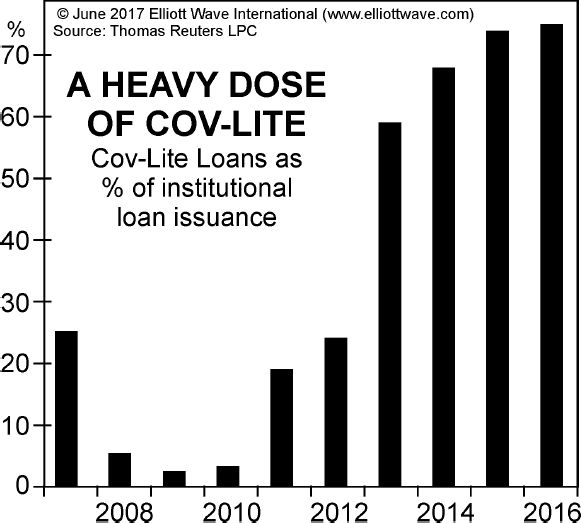 Cov-lite loans now account for three-quarters of the U.S. leveraged loan market, the highest percentage on record. Moody's notes that while issuance of these loans has surged, the cushion against future default cycles has "fallen dramatically." The wide acceptance of cov-lite loans is a result of a long period of positive mood.

When mood becomes more negative, the stock market will turn down and credit will contract as lending standards shift from hyper-easy to tight. Cov-lite loans will be at the forefront of a cascade of defaulting debt.

How do you know when social "mood becomes negative"? Watch the stock market. Right now, we are telling subscribers what needs to happen for the financial trend to turn.