Why Speculators Should Keep a Close Eye on the Bond Market

Many "safety-minded" investors might be in for a surprise

Bonds are generally considered far less risky than the stock market. That's a big reason why flows into bond mutual funds and ETFs have been substantial in the past two years. But there's a major reason to be wary of the bond market. See for yourself.

You probably have heard of the CBOE Volatility Index (VIX) -- also referred to as the stock market's "fear gauge."

Well, there's also a similar measure for the bond market. And a notable development has just occurred. Here's a chart and commentary from our September Elliott Wave Financial Forecast: 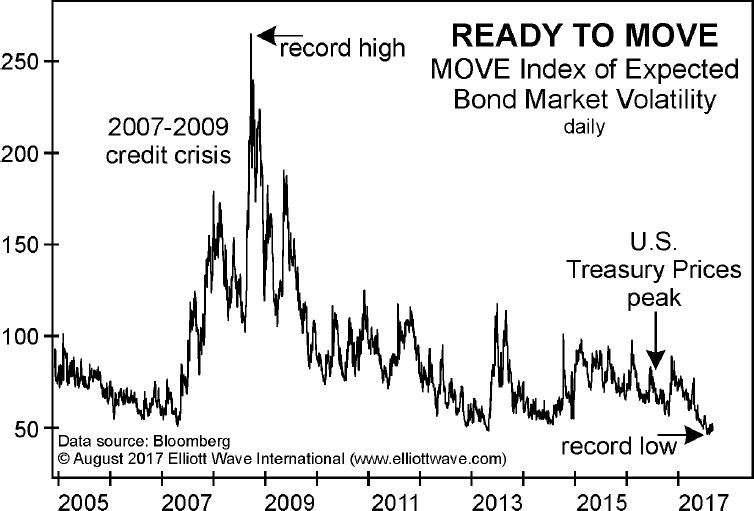 The chart above of the Merrill Lynch Option Volatility Index (MOVE) is the bond market's equivalent to the stock market's VIX. The MOVE index dropped to a record-low 46.91 on August 8, the lowest level since the index was inaugurated in 1988. Never during the past 29 years have bond investors been more apathetic toward the prospects of a big bond market move, and rarely over this time have the risks been greater for just such moves.

Yes, Elliott Wave International analysts have observed over the years that periods of low volatility are followed by periods of high volatility.

So, stock market investors who were rattled by the DJIA's 234-point drop on Sept. 5.might want to think twice before seeking the reputed "safety" of bonds.

Yet, many people have already been jumping into the bond market.

Since January 2016, bond mutual funds and ETFs combined have received an average of $1 billion a day in flows. Compare this with equity ETFs, which have gathered $177 billion since the election and just $99 billion the prior year.

In addition, flows into equity ETFs were mostly offset by flows out of equity mutual funds, while in the bond space, both ETFs and mutual funds benefited from higher flows.

So, the setup is clear: A lot of "safety-minded" investors might soon experience a jarring surprise.

Volatility measures are a helpful aid in assessing a market.

Yet, in our view, knowledge of the bond market's Elliott wave pattern provides you with even greater insight as to just how far a market might move.

You can find our latest Elliott wave analysis of the U.S. bond market in our Short Term Update.