A Glaring Display of the Financial Crowd's "Madness"

The reference to "madness" comes from Charles Mackay's 1852 book, Extraordinary Popular Delusions and the Madness of Crowds.

It describes the activities related to the South Sea Bubble in which many British investors participated from 1711 to 1720. The landmark book also details the Mississippi scheme of 1719-1720 in France and the Dutch tulip mania of the early 1600s.

"Men... go mad in herds, while they only recover their senses slowly, one by one."

The March Elliott Wave Theorist mentioned the book and noted:

Someday a book will be written about the financial madness of our generation, whose ravenous pursuits of markets have shifted focus from stocks to real estate to commodities to precious metals to cryptocurrencies.

With that in mind, the August Global Market Perspective showed this chart and said: 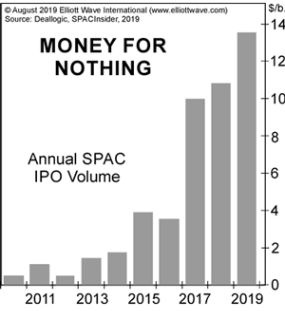 A Special Purpose Acquisition Company is a blind pool or "blank check" offering in which investors hand over their money without knowing what it will be used for.... Such offerings recall the South Sea Bubble of 1720, [about which] Charles Mackay said that promoters issued shares in a "company for carrying out an undertaking of great advantage, but nobody is to know what it is."... In just the first seven months of 2019, close to $14 billion has been raised, a one-year record.

Furthermore, that same issue of the Global Market Perspective showed this chart and added: 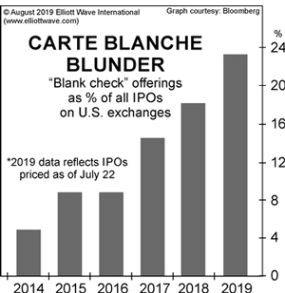 This chart shows that SPACs account for over 23% of all 2019 IPOs. So, nearly one-in-four U.S. IPOs have no known objective. It's a stunning display of confidence.

The question is: how is today's financial confidence reflected in the Elliott wave chart patterns of major U.S. and other global financial markets?

Our Elliott wave experts provide an exact answer to that question in our Global Market Perspective, which you can start reading in just moments.

Look below to learn more...

Every month, EWI's team of global market experts deliver their analysis and forecasts for 40+ markets worldwide (U.S. included) -- all in one convenient publication.


Get a Team of 15 Market Analysts Working for You

You already know that having a global view of market opportunities is essential ... but having the time (and expertise) to analyze every major market in the world is impossible.

That's what our team of fifteen analysts do for you in Global Market Perspective. Our analysts intensively analyze their respective markets all day, looking for short term opportunities. But, at the end of each month, they zoom out and update their big picture forecast for their key markets.

We package their analysis into a comprehensive publication, appropriately called Global Market Perspective.

You get analysis and forecasts for every major market in the world from analysts who dedicate themselves to forecasting a group of markets. It's like having a whole department of specialized analysts working entirely for you.

Elliott Wave International's analysts have been featured on financial channels like :

We guarantee that Global Market Perspective will give you the essential analysis to spot the world's hotspots and danger zones.You'll be tuned in to global markets like never before. If you disagree, just contact us. We'll give you your money back. That's 100% risk free.

Read & watch the most recent analysis

Here’s Why Blind Contrarianism Failed in 2020

SPAC: How Long Will This “Money for Nothing” Trend Last?

Cheers for the 2021 Stock Market and These “Great Expectations”