A Question of Timing: Technical Vs. Fundamental Analysis

On the other hand, fundamental analysis is about factors outside of the market. These include corporate earnings, interest rates, government policy, world events and so on.

So, which camp has the best approach to determine the next move for stocks?

The focus of their study were a thousand pairs of recommendations made between November 2011 and December 2014 on the TV show "Talking Numbers" ... The first half of each pair was a recommendation from a top technician about a stock in the news; the second half was a recommendation about that same stock from a leading fundamental analyst.

This chart shows the results: 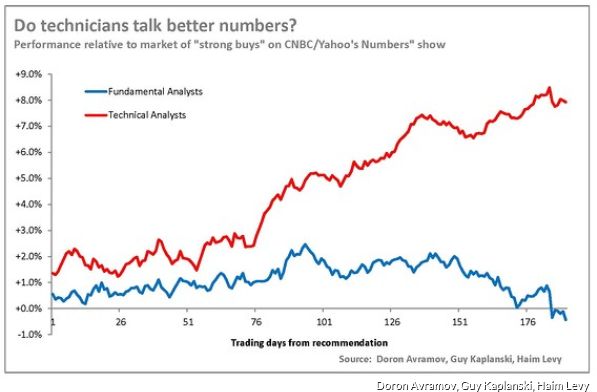 In the nine months following each recommendation, the stocks technical analysts identified as strong buys on average outperformed the broad stock market by 7.9%. The stocks they mentioned as strong sells underperformed by 8.9%.

Technical analysts were the clear winners.

Even so, technical analysis is largely ignored in the financial press these days.

The reason for the present dearth of interest in technical analysis--that is, analyzing market conditions as opposed to events and conditions outside the market--is historic financial optimism. When investors feel optimistic, they believe in external, mechanical causes of stock market movements. When they are pessimistic, they search for internal, organic causes.

For evidence, you don't have to think any further back than the 2007-2009 financial crisis, when headlines like "How Did Economists Get It So Wrong?" appeared in spades (NY Times, Sept. 2009).

Elliott wave analysis is a form of technical analysis. Our Elliott wave experts are now telling subscribers when they expect a shift from historic financial optimism to the start of a historic pessimism -- again.

Prepare now for what they see ahead by reading our investor-focused Financial Forecast Service, risk-free for 30 days.

That's right -- the chart patterns of stocks, bonds, the greenback, gold, silver and more -- are telling a story that you need to know.

Anticipate high-confidence turns in these markets -- before they happen!

Tapping into our timely insights is easy and requires no obligation on your part for 30 days.

Look below for the important details …

See the Chart for Yourself: The "Quick Shift" to "Cash is King"

One Man's Trash is Another Man's Treasure

Global Stocks, Bonds and Bitcoin: See What the Waves Show