The beauty of the Elliott wave model is that it can be applied to all speculative financial assets.

Of course, that includes stocks, bonds, gold, oil, etc. Yet, Elliott waves can also be useful in identifying trend changes in, say, the average value per acre of Iowa farmland, the classic car market and many other financial arenas where prices fluctuate -- even unconventional ones, including New York City taxi medallions.

Indeed, our May 2014 Elliott Wave Financial Forecast showed this chart and said: 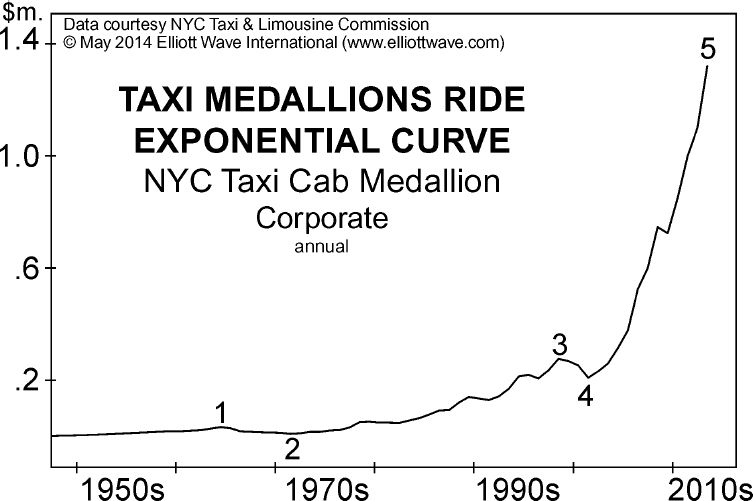 Since the 1940s, New York City has regulated the number of taxicab medallion licenses. Thanks to a limit, which currently stands at 13,605, and a bull market, prices for medallions have risen steadily. After a rare setback in the early 2000s, prices started to rise exponentially as corporate and individual licenses passed $1 million apiece. Notice, however, that the acceleration comes at the end of a five-wave pattern.

As you know, the completion of a five-wave move means that a trend change is at hand, and that's exactly what happened.

Here's an updated chart and commentary from our June 2019 Financial Forecast: 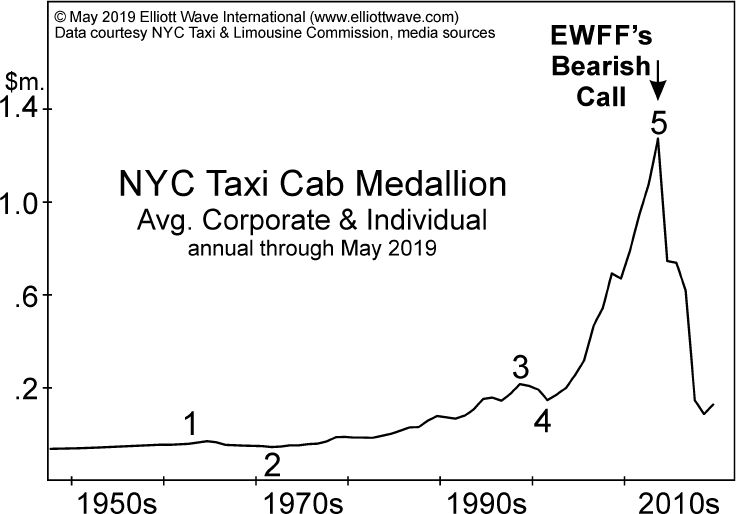 Yes, Elliot wave analysis works with an array of financial assets, and our analysts are continuing to keep subscribers ahead of what they expect will be major trend turns.

Three markets to keep a close eye on right now are stocks, bonds and gold.

See what our analysts see, risk-free for 30 days. Learn how to get started just below.

Or, maybe you're worried that you simply don't have the knowledge to make informed investment decisions.

Here's good news: To see the real driver of stock prices through the eyes of our Elliott wave experts will help you sweep these fears aside.

After your review, you'll find yourself facing financial markets with a WHOLE, NEW CONFIDENCE.

And, the icing on the cake is that your review of our analysts' market insights is risk-free!

Learn how to get started by reading below …

A Look at the Perilous Psychology of Financial Bubbles

Look at This Big Reminder of “Dot.com Mania”