Mass psychology is always at work in the financial markets, where investment frenzies can build up then erase billions of dollars from investors' portfolios, like during the internet stock bubble of the 1990s and the real estate bubble of the mid-2000s.

The main reason why so many financial markets' participants lose money was expressed more than a century ago by Charles H. Dow, the creator of the Dow Jones Industrial Average:

There is always a disposition in people's minds to think the existing conditions will be permanent.

Yet, the only thing that's "permanent" in financial markets is change.

The Wave Principle is a... description of the steps human beings go through when they are part of the investment crowd... The path they follow in moving from extreme pessimism to extreme optimism and back again is essentially the same over and over and over, regardless of news and extraneous events.

As the illustration below shows, these basic patterns link to form five- and three-wave structures of increasingly larger size: 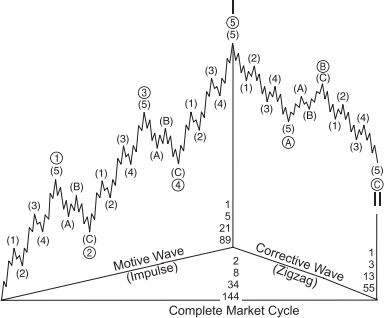 In a bear market, the five waves of the main trend would be down and the three corrective waves would be up.

It's important to note that the Elliott wave method does not provide certainty -- yet, it does provide a high-confidence way of assessing the market's future path.

This applies to any widely traded financial market in the world. Investor psychology is the same everywhere.

Learn what our Global Market Perspective has to say about 50+ global financial markets by following the link below.

BUT -- news is a reflection of the past, not an indicator of future prices.

Put yourself on the RIGHT SIDE of 50+ worldwide financial market trends by getting our latest Elliott wave analysis.

Follow the link below to get insights which will likely help you to protect your portfolio.