You may know that the late Paul Macrae Montgomery was a noted market observer who originated the Magazine Cover Indicator. It says, simply, that by the time an investment trend hits the cover of a major magazine, that trend is usually in its last stages.

As you might imagine, Montgomery made other market observations. Our March 8 U.S. Short Term Update mentioned one of them:

Legendary analyst Paul Macrae Montgomery used to say that closing streaks in the market are not randomly distributed; they most often occur at the start of trends, at the midpoint of trends (i.e., the "third of third" wave) and at the end of trends.

A closing streak in the market is when prices close either up or down for a significant stretch of consecutive trading days. Context is key when evaluating them.

When I say "context," I mean an analyst must also consider factors -- like the stock market's Elliott wave pattern, volume, other technical indicators, plus the prevailing investor sentiment.

The 13-day closing streak in January 1987 occurred in the middle of a powerful third-wave rally, which was forecast in a January 1, 1987 Elliott Wave Theorist Special Report. That streak included back-to-back days of nine-to-one advancing issues versus declining issues on the NYSE, a record NYSE volume day on the upside and two daily Dow-point gains that made records at the time. The wave structure indicated it was the middle of an advance, and the market';s breadth and volume confirmed it. All told, the Dow rallied 44% from January 1 to August 25, 1987, after which stocks crashed 41% from that high to a low on October 20, 1987.

The reason I'm sharing all this about closing streaks with you now is because of what's been going on with the Dow Jones Transportation Average, as this chart from the March 8 U.S. Short Term Update shows (commentary below): 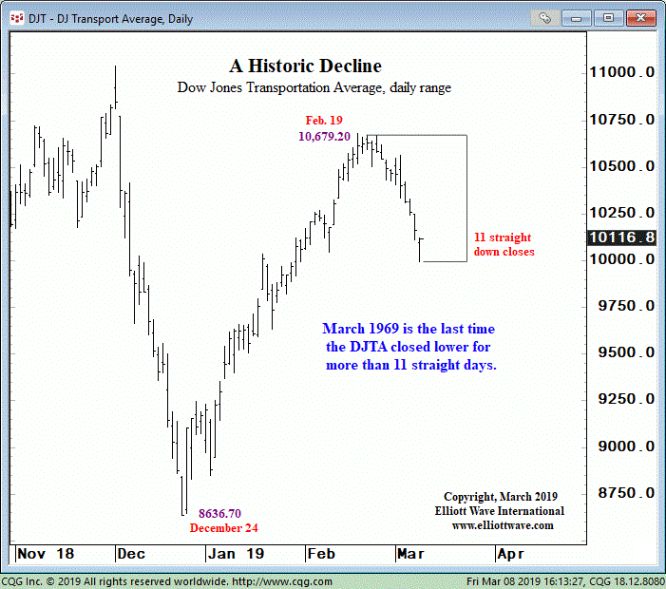 The March 8 U.S. Short Term Update goes on to put this closing streak into the above-mentioned context.

Find out exactly what our chief market analyst expects next by taking advantage of our 30-day, risk-free trial.

"Human Nature Does Not Change, Nor Does Its Pattern"

It's true: During every market cycle, some investors proclaim that "it's different this time."

Yet human nature drives price trends, so the patterns of investor psychology never change. That means financial markets are predictable.

Learn what our analysts are telling subscribers about the next big moves in key financial markets like stocks, bonds, gold, silver, the U.S. dollar and more.

Find out how to get started with our 30-day, risk-free offer, just below...

Investors: Are You in Danger of Emotion-Driven Decisions? You're Not Alone.

A "Manufactured" Reason for This Stock Market Sell-Off