A bullish platinum forecast, that is -- one that came just in time for the precious metal’s powerful surge to three-month highs

Let me ask ya'll something: Is it possible to walk in the rain without an umbrella and get completely drenched -- and yet, at the same time, stay totally dry?

Of course, the answer is no. You probably think it's silly to even suggest such a scenario. But I wanted to make a point about something that goes on in mainstream market analysis all the time. That being, the same exact news events produce two opposing results for a market's price action.

Take, for example, the recent performance in platinum futures. This July, platinum was deemed the worst-performing precious metal, with prices down 10% in the last year alone and speculative sentiment at its most bearish level since the Commodity Futures Trading Commission started publishing records in 2006. (July 1, The Telegraph)

And, per the mainstream experts, one dark cloud loomed heavy over the market, casting a long bearish shadow in its wake: "Dieselgate," the ongoing VW emissions scandal, which they reason has dealt a massive blow to diesel car sales. (Note: Diesel engines use platinum in their catalytic converters.)

And yet... in early July, platinum prices turned up in a powerful rally to three-plus month highs on August 9, all the while every bearish fundamental stayed the same!

In simplest terms: There was no fundamental reason for platinum prices to turn up. There was, however, a major Elliott wave reason for them to.

Then, in the July 5 Metals Pro Service update, our senior metals analyst Tom Denham prepared his subscribers for a strong rise in platinum to new highs and wrote:

"Broadly (360-minute chart), platinum may be completing the middle wave of a correction and setting up to rise to a new peak above 972.50." 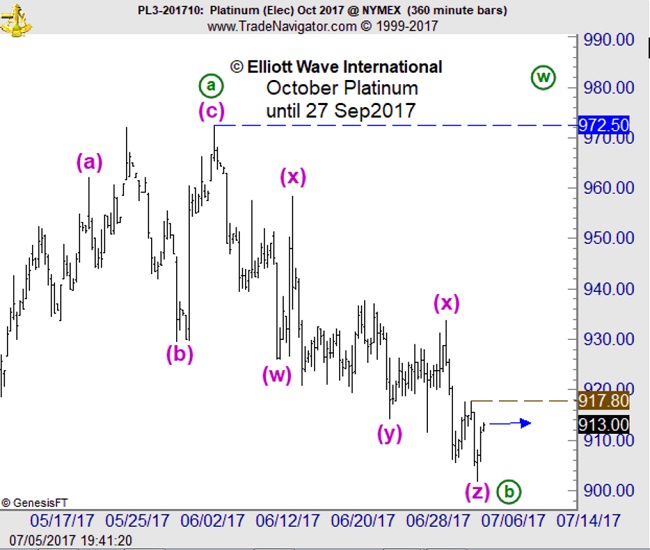 The next two charts capture the ensuring rally on a 360-minute and daily time frame: 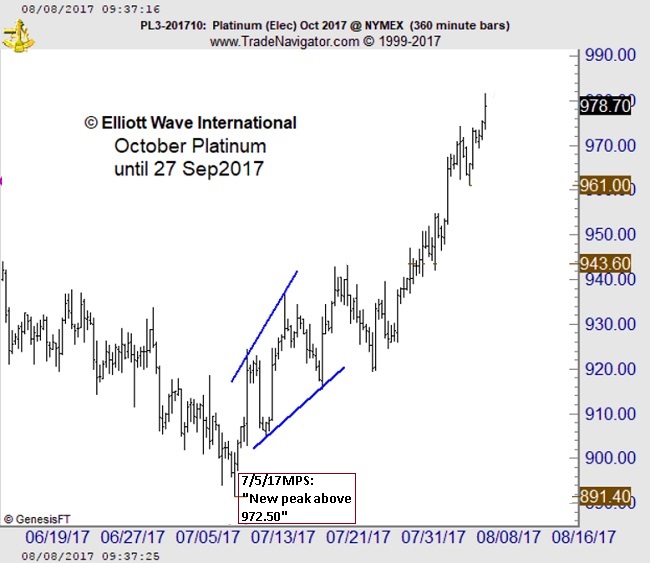 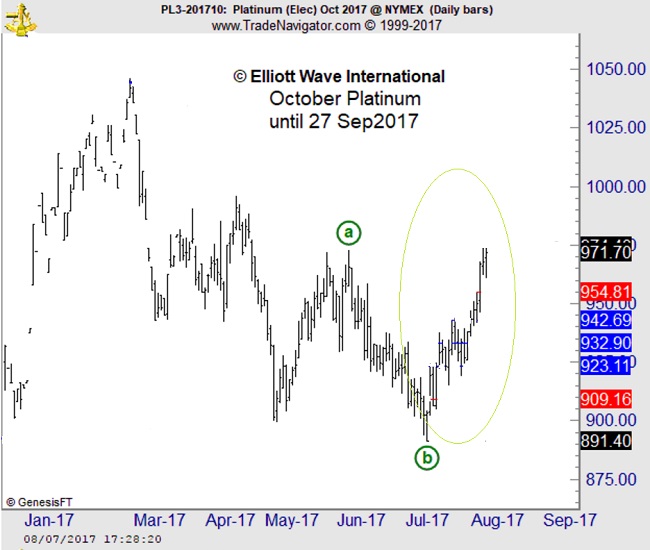 In the end, no method of market analysis is 100% accurate. We'd love to say Elliott wave analysis is an exception. It isn't. What we can say is our analysis provides the most objective, "news-free" perspective on market behavior, and where the next high-probability trade set-up may arrive.

In the case of platinum, our current Metals Pro Service analysis sees prices continuing a bullish course, so long as they hold above a key Fibonacci retracement level.