It's often said that gold and silver "always" go up during hard economic times.

But you might be surprised to learn what the historical evidence says about this widely held belief.

The first thing to point out is that gold did not make a nickel of U.S. money for anyone in any of the recessions and depressions from 1792, when the gold-based dollar was adopted, through 1969, a period of 177 years. ...

In 1970, things changed dramatically. Investors lost interest in stocks and preferred owning gold instead, for a period of ten years. The same change occurred again in 2001 ... but recession had nothing to do with either of these periods of explosive price gain in the precious metals.

During the 1970s, and following 2001, gold's biggest price gains came as the economy was expanding, not shrinking. When the economy grows, liquidity becomes available and must go somewhere - including investments like gold.

The same is true of silver prices during economic expansions. Read this excerpt from the November 2011 Theorist:

Silver has an even more pronounced relationship to economic cycles than gold does. [The chart below] shows the history of silver prices and economic conditions going back 40 years. ... Notice that all of silver's strong price gains came during economic expansions. Then observe that all seven recessions since 1970 have coincided with falling silver prices. Finally, note that all four crashes in silver -- those of 1973, 1980, 1982 and 2008 -- came during recessions. 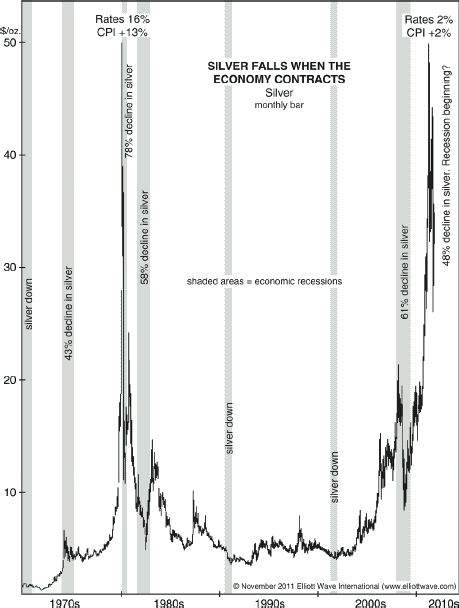 Bottom line: It's a myth that gold and silver are ideal hedges against economic downturns.

Elliott Wave International continues to provide subscribers with myth-busting financial insights that you will generally not find in the financial media.

Why You Should Keep an Eye on Gold