And... the bullish Elliott wave forecast that came to be

Get ready for the biggest boxing match since the epic Mayweather-McGregor battle on August 26. Here's the ledger:

And now for the challenge: On August 25, gold prices soared to their highest level in nearly a year, putting the precious metal on track for its first outperformance of stocks since 2011. Observes one August 25 news source:

"Gold is doing something unusual and quite bullish. After a disappointing few years for precious metals investors, gold is finally taking the lead." (CNBC)

So, which contender prepared investors for gold's 2017 comeback?

Well, for that, we go back to the beginning of the gold rebound in late 2016. At the time, gold prices were circling the drain of an 11-month low after plunging 16% from their August 2016 peak. Now, in the "corner" of mainstream analysis, the precious metal was down for the count thanks to the Federal Reserve's hawkish rate-hiking agenda.

Here, these news items from the time capture the embattled bullion scene:

From there, the Fed delivered as promised, hiking rates on December 14, March 15, and June 14 (two out of three hikes in 2017 so far, and with four more months to go) And yet, instead of those hikes being the "death-knell" for precious metals, gold prices turned up from their late December 2016 low, rallying 12%-plus to the 11.5-month high we saw on August 25.

Now, let's size up the competition, Elliott wave analysis. Back in the beginning of gold's comeback, our Metals Pro Service analyst Tom Denham was also bearish towards gold's future, albeit for different reasons. However, he acknowledged a few "threats" to his Elliott wave count and opened the door to a bullish alternate scenario. On December 15 in his Metals Pro Service, Tom wrote:

"On the other hand, intraday analysis (not shown) allows that gold may be falling in a fifth wave now, so a bottom could form in the 1130 to 1114.16 range. Price would have to push above 1168 from current levels to suspend the bearish view and to begin considering that an important bottom was forming." 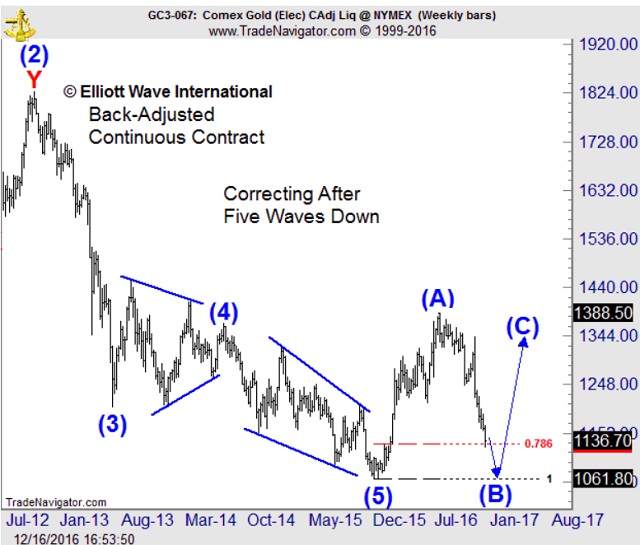 "Updated wave count: Gold pushed to a slight new high on Tuesday in what now appears to be an impulsive, five-wave move on the intraday charts...

"Approaching the 1200 area would raise confidence that wave (B) has bottomed and wave (C) is beginning to rise with potential through the ___area."

The next chart captures the 2017 rally in gold in bold detail: 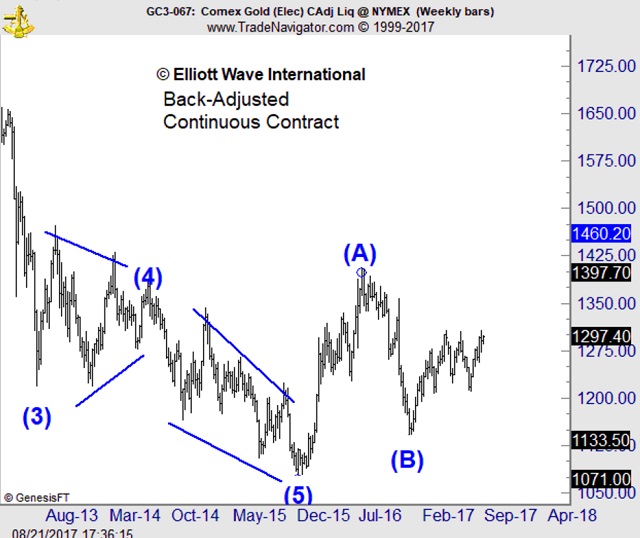 The final score: A winning round for Elliott wave analysis in anticipating gold's move to the upside. However, it must be noted: Gold's 2017 rally hasn't been a straight shot, but rather a staggered rise. In fact, three times gold prices have come close to or briefly tapped the $1300 per ounce level, only to turn back down or stall.

Now, our August 18 ElliottWave TV episode interviewed Tom Denham to ask him whether the third test of the $1300 in August is the "charm" -- i.e., whether prices would finally keep its grip on the upside. To which Tom replied:

"The great likelihood is that third top we saw form here in August is not going to last very long, and I expect gold to punch well above the levels that we've seen in these recent months."

Each day, Tom closely monitors gold's progress in his intraday, daily, and weekly Metals Pro Service updates, where he identifies the key and critical levels prices must obey to keep the bullish trend alive.