Gold Investors: It's Time You Knew the Truth About the Fed

Do hawkish Fed policies hurt gold prices and dovish ones help them? Find out right here.

The question facing you today was never IF the Fed was going to raise rates this time around. The number-crunchers predicted a 93.5% probability of a hike.

The big unknown was "how much" of a hike and how determined Fed chairwoman Janet Yellen's would be regarding future policy. Say the mainstream pundits: a hawkish Fed is bearish for gold. To wit:

"Gold notches fifth straight day of losses as Wall Street prices in near certainty of a lift to US benchmark rates. Fed and other central bank jaw boning and hawkish sound frequently lead to gold weakness." (June 13 MarketWatch)

While a dovish Fed is bullish for gold --

There's just one problem with this argument; namely, it isn't exactly accurate. Alas, we stand before you with the following 15-year price chart of gold, alongside every major Fed monetary policy initiative over the same period.

Look closely, and the truth becomes clear: Hawkish policy isn't bearish for gold; while dovish policy isn't necessarily bullish, either. Under the chart is a more elaborate explanation of each policy measure: 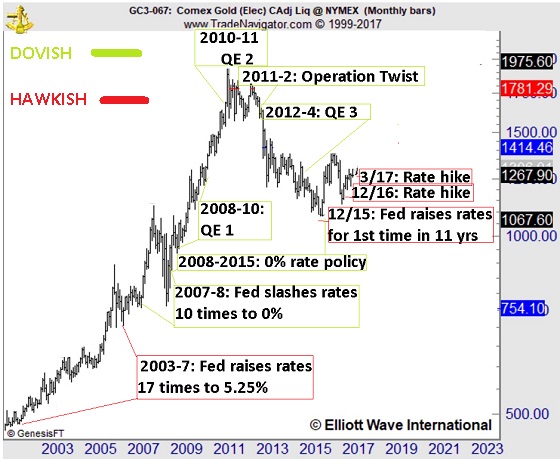 The evidence is undeniable. Gold prices are not led by the Fed. There's a much larger force at play, driving the precious metal's trend. We believe it is investor psychology, which unfolds as Elliott wave patterns on gold's price chart.