Gold: What You Can Learn from Speculators' Mistakes

Hedge fund managers are considered to be among the smartest people on Wall Street.

Ironically, as a group, they're notorious for consistently being on the wrong side of major turns in the markets they trade. By contrast, a group of insiders called Commercials are generally on the right side of major market turns.

With that in mind, consider this chart and commentary from the August 2015 Elliiott Wave Financial Forecast: 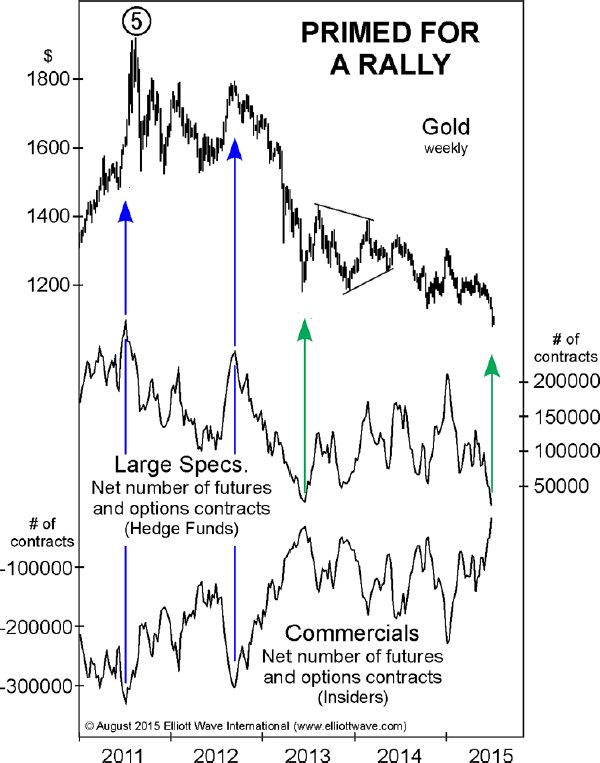 As the chart shows, Large Speculators and Commercials hold a net-position size that is a multi-year extreme, and it is opposite to the position size held several weeks prior to gold's all-time high at $1921.50 in September 2011 and at gold's peak in October 2012... a sentiment that is consistent with a gold rally. Despite the possibility of near-term base-building, we still anticipate that the advance, when it starts, will last several months.

At that time, as you might have guessed, sentiment had again turned decidedly bearish.

But, yet again, most big players were on the wrong side as gold began another slide.

After the market closed on that date, our U.S. Short Term Update said:

Note the single-digit Daily Sentiment reading (trade-futures.com) that has attended this week's lows in gold (6%) and silver (7%). In fact, last night's reading was the fourth consecutive day of sub-10% gold bulls.

Since few investors expect gold to rally, does that mean the price of the precious metal will skyrocket from here? Well, sentiment measures are highly useful, as we have shown. But they need to be combined with the Elliott wave model for pinpointing high-confidence junctures.

Our analysts spell it all out for you.

“When an Elliott wave is complete, it brings striking clarity to the market’s…likely future direction. Such junctures offer complete independence from the herd, and those times tend to be highly rewarding.”

Imagine knowing the market's "likely future direction" – before the news; in fact, without any news.

At this juncture, almost no one expects gold to rally... which is why YOU should.

See how our invaluable insights can help you prepare for the next move not only in gold, but also stocks, bonds, the U.S. dollar and more

One of the most opportune markets covered in the Financial Forecast Service is precious metals. For a very limited time, we'll provide a FREE copy of Robert Prechter's metals masterpiece, How to Forecast Gold and Silver Using the Wave Principle ($89 value). 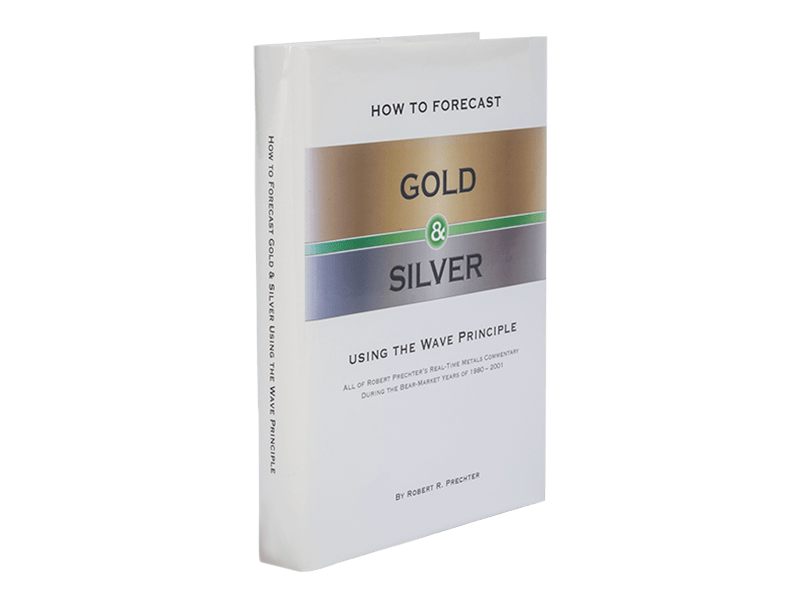 How to Forecast Gold and Silver Using the Wave Principle
Robert Prechter correctly called nearly every major turn and trend in gold and silver during one of the metals' most historically baffling periods. The years in question ran from 1979-2001, a period book-ended by gold's $850 high in 1980, and its low near $250 in 2001. In exquisite detail, you see exactly what Bob saw at the time and learn exactly why he made those forecasts. Every forecast delivers valuable insight into the real-time application of the Wave Principle, insight that helps you understand and apply Elliott waves to the markets you follow today.

for 3 months of unparalleled insights + How to Forecast Gold and Silver Using the Wave Principle FREE.

Gold Bulls Charge Full Steam Ahead -- Over a ... Cliff?

Be Aware of This Extreme Development in Gold