As the final days of 2017 draw near, we're taking a look back at the biggest market movers and shakers of the year. And, the winner for the "best-performing commodity" goes to... palladium. (Dec. 21 Financial Times)

In case you missed the metal's stunning performance, here's a brief recap: Since January 2017, palladium prices have rocketed more than 50% -- making the usual show-stopper, gold's, measly 12% gain over the same period look like a lump of coal by comparison.

The metal's major milestone: On October 16, palladium scaled the $1000 level for the first time in 17 years, solidifying its newfound super-star status. Here, the following headlines capture the scene:

For palladium investors, the best-case scenario would've been to catch the metal's stunning surge above $1000 as early as possible.

So, what if you were given objective insight into palladium's triple-digit potential back in January, ten months before the move occurred?

"Palladium appears to be rising in a third wave with potential through 1000." 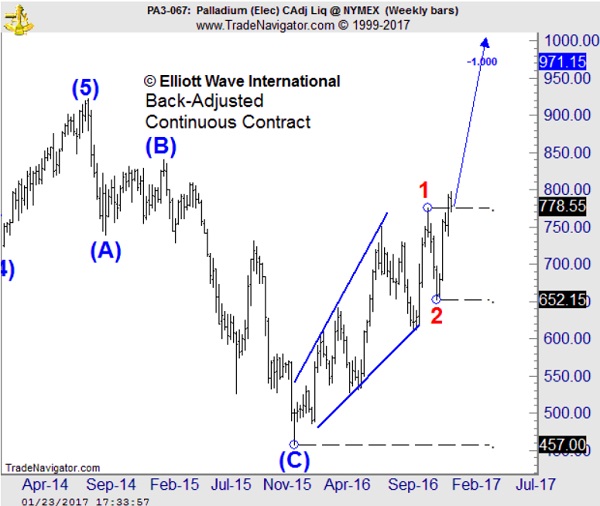 In fact, Tom first began to introduce a long-term bullish Elliott wave interpretation for palladium as early as November 2016 via the analysis below:

"Updated wave count: Palladium has risen to current levels in five waves. This development suggests the overall trend is up and that it is time to look for declines to be limited corrections and overall strength to be persistent. The current target is through 834.55"

"The weekly chart highlights potential to 972.98"

The final chart below shows where Tom's Metal Pro Service analysis was published within palladium's magnificent rise above $1000 per ounce: 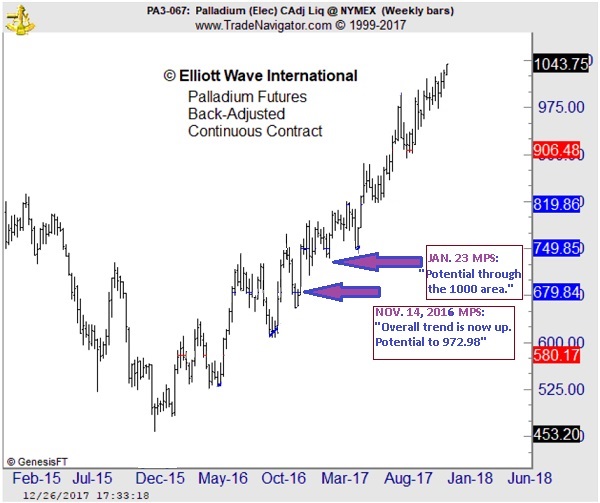 Whether the precious metal star of 2017 will continue to steal the show next year -- well, Tom Denham's Metals Pro Service identifies the critical support level prices must stay above to keep the uptrend going.