But, the metal's rally aligns perfectly with Elliott wave logic

Step aside, gold. Take a back seat, silver. The recent star of the metal's show has been none other than palladium.

Trader 1: "Oh my gosh! Did you hear? On June 9, palladium prices soared Wonder Women-style to their highest level in 16 years."

Trader 2: "Holy cow! What caused the metal to rally?"

Trader 1: "That's the thing! No one knows! It's a complete fundamental mystery. Here's how one news source put it:

'Palladium strength continues to defy market logic. The market remained bemused by the drivers behind the spot strength... The palladium market is broken.

'Commerzbank analysts said they saw no justification for the strong palladium price, 'especially as the Chinese market -- the second key automotive market for palladium -- is faltering.'" (June 13 Platts)

Trader 2: "So, how are we supposed to gauge future price action if the metal continues to defy market logic?"

Trader 1: Shrugs shoulders, "Your guess is as good as mine!"

Guesswork? A broken market? No justification for strength? That's one way to see palladium's explosion to the upside.

Here's another way. On May 22, our Metals Pro Service analyst Tom Denham explained that the "choppy, overlapping mess" of palladium prices were coming to an end -- and the next move was "broadly bullish." Tom wrote: 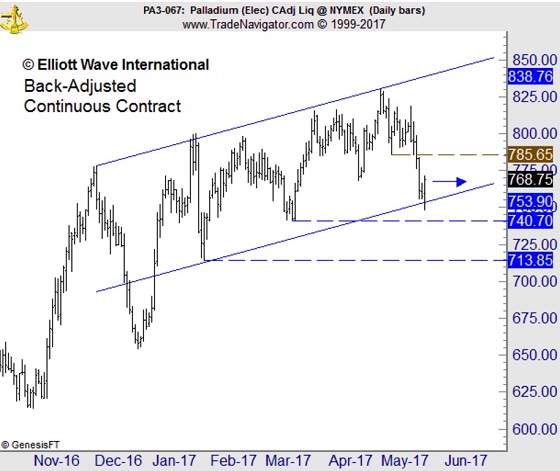 A few days later, on May 26, palladium prices surged higher, supporting Tom's case for a bottom. On May 26, Metals Pro Service printed this alert:

"Palladium rose sharply on 26 May in a move that suggests a bottom has formed and the trend is now up. The outlook is bullish while price holds above 768.10. The target is the top of the trend channel -- now at 840.58." 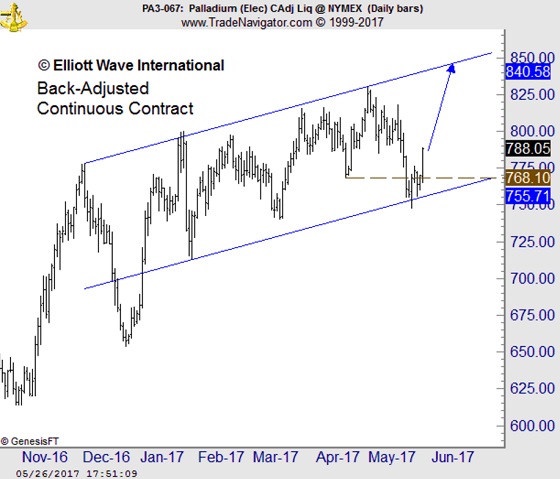 "Palladium is rising sharply towards 883 while price holds above its Fibonacci 0.382 retracement level - now at 804.78." 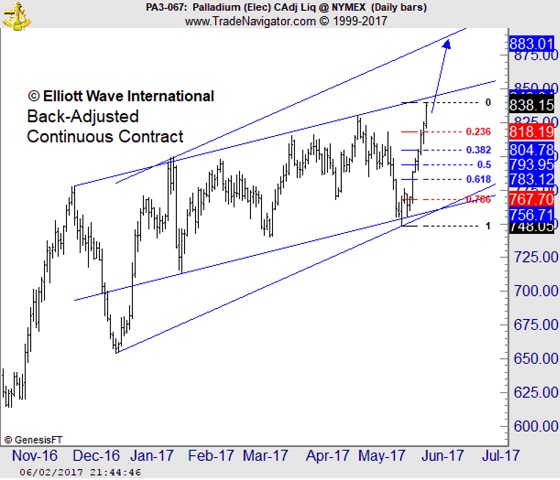 The next chart captures the full extent of palladium's incredible surge to a 16-year high. The move, while completely "defying market logic," followed its Elliott wave script to a T. 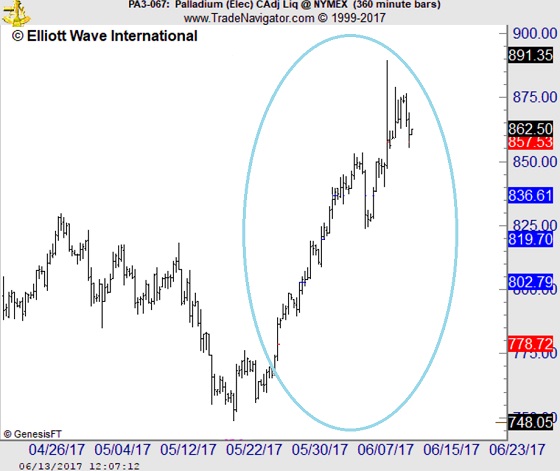 Who will be the next star of the metals show? Don't wait to find out at the water cooler. Right now, Metals Pro Service identifies a specific price level that would "suspend" a bearish turn in palladium's near-term future.