Before Blaming DJIA’s Sell-Off on Turkey, Consider This

Why did stocks disregard bad news from Turkey for weeks – and then it suddenly mattered?

It was a bear of a weekend for U.S. stock market bulls, thanks to the Dow Jones Industrial Average's triple-digit sell-off on Friday, August 10. According to the mainstream experts, those caught on the wrong side of the market's rout had one clear name to blame -- Turkey.; More specifically, an escalating financial crisis in Turkey, exacerbated by a very anti-Turkey August 10 tweet by U.S. President Donald Trump.

We'd love to say, "That's a wrap!" and tie this story up here with a tidy little bow. That, however, isn't possible. And here's why: The financial crisis in Turkey is far from new. Nor, for that matter, are the mounting tensions between the U.S. and Turkey.

In fact, Turkey has been on doom-and-gloom watch ever since the country's controversial President Recep Erdogan was re-elected in June. In the months that followed, the Turkish lira repeatedly plummeted to a history-making, lifetime low (in July and August) and the U.S. imposed sanctions on the Turkish ministers of Justice and Interior over the alleged unlawful imprisonment of a U.S. pastor (on August 1).

But don't take our word for it. These news items from the time recapture the dismal scene.

And yet -- instead of "rattling" or "spooking" U.S. investors, the Dow soared more than 1500 points between June 27 and August 7, smack dab in the middle of Turkey's ongoing crisis.

As for that anti-Turkey tweet by U.S. President Donald Trump, in which he announced a doubling of tariffs on Turkish aluminum and steel and said, "Our relations with Turkey are not good at this time" -- well, let's look at the time stamp. Trump published said tweet at 8:47 am on August 10.

The Dow, however, started to lose steam several days before Trump's tweet.

So, if the alleged connection between "bad news from Turkey" and Trump's tweets is tenuous, what is the reason for stocks' recent weakness?

As always, it was a matter of a change in collective psychology of the market participants.

Elliott wave analysis helps you predict those shifts. See, while the mainstream media sent investors on a wild "turkey" chase after stocks already turned down -- our Stocks Pro Service intraday analysis of the DJIA was there to warn of the potential downturn ahead. On August 8, our Stocks Pro Service editor Robert Kelley identified a rare Elliott wave pattern on the Dow's 10-minute price chart known as a triple zigzag* and wrote:

"Bottom Line: We should expect a decline to initial support at the previous fourth wave low at 25462.

"I'm calling the drop to today's low an initial zigzag in an unfolding double zigzag.; Wave x should be near an end and followed by another zigzag down toward support at the previous fourth wave low at 25462." 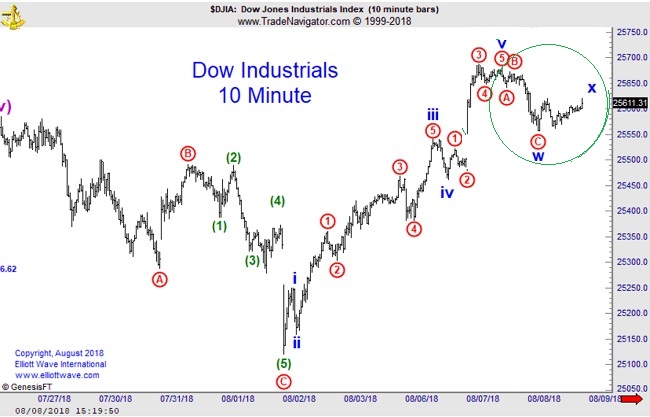 From there, prices began to weaken: 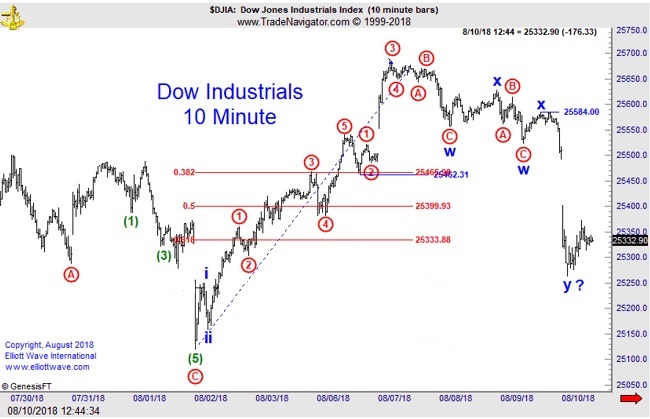 It's easy to look at the news of the day and find a "reason" for why a financial market made a certain move -- after the fact.

Elliott waves aim to identify an objective cause for price action -- before it unfolds.

Is Elliott wave analysis always right? No. Markets love to surprise, that's why our analysis includes critical support and resistance price levels to indicate where the price pattern interpretation is wrong, to help you manage risk.

Yet, in our opinion, despite the inherent uncertainty of all market forecasting, knowing in advance where prices will likely go is far better than having a good explanation of why they did it.

A single zigzag is a simple three-wave pattern labeled A-B-C. The sub-wave sequence, meaning the breakdown of each individual wave within the pattern is 5-3-5, in which the top of wave B is noticeably lower than the start of wave A. Occasionally zigzags will occur twice, or at most, three times in succession, particularly when the first zigzag falls short of a normal target. In these cases, each zigzag is separated by an intervening 'three,' producing what is called a double or triple zigzag. 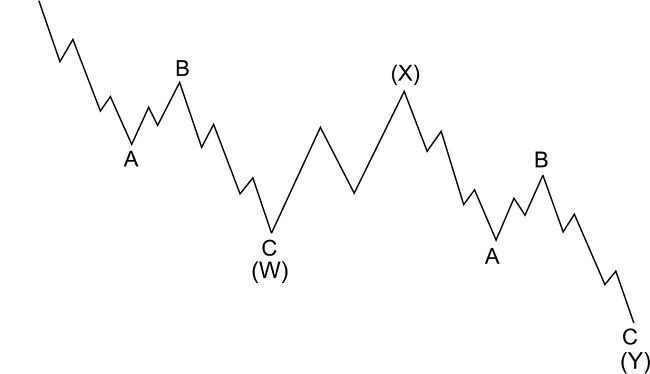 EVERY stock market move is a new opportunity—for the trader who sees them coming.

No matter how long you’ve been trading intraday, you can’t see everything.

Here is one way you can anticipate more turns and trends, and with more confidence. Hire an objective, experienced Elliott waves expert.

Someone who prepares you well before the opening bell rings. Someone who helps you apply waves in real time. Someone who improves your understanding of what really makes markets tick -- every single trading day.

With an EWI expert at your side, every day, real-time, you’ll miss fewer opportunities—and you’ll get blindsided by fewer big waves.

We're by your side -- every hour of every trading day.

1. You Get Timely Forecasts Throughout the Trading Session

Your Stocks Pro Service subscription puts an expert in your corner. His goal is to make sure that day-by-day, hour-by-hour, you have the very latest Elliott wave forecasts for the U.S. markets – from pre-open through close. This intensive coverage includes the big 3 U.S. stock indexes, popular ETFs -- and on occasion, individual stocks.

2. You’re Ready for the Day’s Action with Pre-Open Overviews and Daily Wrap-Up Videos

Every morning before the U.S. markets open, you get a concise overview of what we expect in the hours ahead. You’re prepared before the opening bell with the key price levels and targets you need to know. After the close, editor Robert Kelley records a Wrap-Up Video that walks you through the day’s price action and then shows you how it fits into the Elliott wave picture.

Seeing and hearing Robert’s thought process helps you to go beyond the wave count -- so you gain a deeper understanding of each wave’s character and the underlying sentiment.

3. Supporting Technicals Round Out a Complete Picture

Updates throughout the week on market sentiment, technical indicators and correlated markets bolster the outlook and help you act with conviction. When all supporting tools give the same message, confidence is high. If the messages don’t line up, it’s time to be cautious.

Let an Elliott wave expert help you anticipate intraday turns and trends in U.S. markets. PLUS -- when you subscribe, you can join in Robert Kelley's subscriber-only webinar on June 3: Tools and Tips to Boost Your Intraday Trading Confidence + Q&A.

Acadia Pharmaceuticals Soars to Record Highs: Were You in Line When it Was Time to Buy?