The world of finance is infinitely varied. There are countless markets to invest in, multiple time frames, and endless methods and tools to help keep you on the right side of price moves.

But no matter these differences, there is one commonality that unites all traders and investors: The desire to know when a high-confidence opportunity has arrived.

Many mainstream experts say the number one indicator of significant price turns are market "fundamentals": news and events pertaining to the market at hand. These factors run the gamut from natural disasters, trade wars, scandals, hirings and firings, trends in the broader market, and economic events like earnings reports.

And, according to the news-moves-market analysts, one factor ruffled the GOOS's feathers: a January 23 downgrade by Wells Fargo.

Pardon our Geese... but that logic is a complete quack!

The truth is, GOOS had been migrating south since late November 2018, when the stock hit an all-time high. As GOOS was rising to record highs, and later sharply reversed lower, our Trader's Classroom instructor, Jeffrey Kennedy, watched the stock's Elliott wave price pattern.

In the November 12 Trader's Classroom, Jeffrey revealed that the pattern had completed an Elliott wave correction and called for "GOOS to continue higher, back to beyond 68.75." From there, GOOS's wings had indeed soared, pushing to a lifetime high late that month.

Then, in his November 27 Trader's Classroom, Jeffrey identified another completed Elliott wave pattern, this time a five-wave move up. The stage was now set for "quite the decline." Once again, GOOS followed its Elliott wave flock and began a precipitous decline.

To see where Jeffrey's Trader's Classroom analysis occurred along GOOS's flight path, check out the chart below: 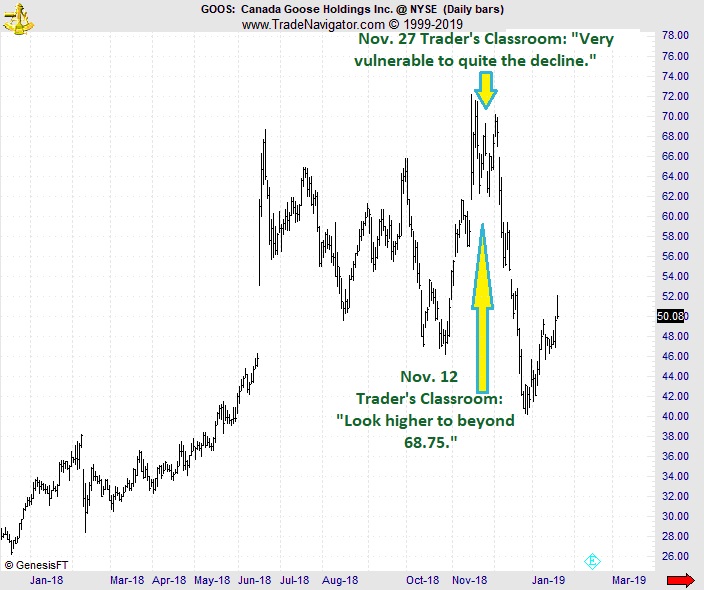 We'd love to say all Elliott wave-based analysis ends happily ever after, as was the case with GOOS. But this isn't a fairytale, and no market forecasting method is perfect.

Jeffrey's Trader's Classroom offers something else: A perfectly objective means for identifying trade setups with an attractive risk/reward potential in the world's leading markets.

As you saw in Jeffrey's video, every chart tells a story of the past....AND gives HUGE clues about what's going to happen next. What Jeffrey showed in the video is just a taste of what you need to know. In 60 days' time, you can take an accelerated track to becoming that trader who can rapidly scan a batch of charts and say "No...No...No...No...YES!"

We've put together this 60-Day Trader FastTrack collection to give you the essentials you need to spot opportunities FAST.

First, the Bloomberg Visual Guide to Elliott Wave Trading. In their bestselling book, Jeffrey Kennedy and co-author Wayne Gorman -- two of the most trusted experts in the field of technical analysis -- use real-life scenarios to show you exactly how you can unleash the Elliott wave method's power in your trading style. This book is available in our store for $60, but it's yours when you buy the 60-Day Trader FastTrack.

Second, Trading the Elliott Waves -- Winning Strategies for Timing Entry & Exit Moves. In this fast-paced, two-hour video, Robert Prechter -- NYT bestselling author, World-Trading Championship winner and Jeffrey's Elliott wave mentor -- reveals his favorite trading strategies. The video is available in our store for $99. It too is included in your 60-Day Trader FastTrack.

Finally, Traders Classroom. Throughout your 60-Day Trader FastTrack, Jeffrey is your trading instructor. Three times a week, Jeffrey reveals a market opportunity -- often in real-time -- as a case study. He carefully walks you through the logic of the opportunity. If you have a question, you look for it in the included archives or one of the other subscriber-only resources. If you don't see it, you send Jeffrey a message and he does his best to give you an answer. Two months of this instruction service normally costs $154 -- but again, they are yours as part of your 60-Day Trader FastTrack.

Normally, these resources would cost you $313. For a limited time, the 60-Day Trader FastTrack collection gives you all of them for $99.

Act now -- and mark your calendar.

In 60 days, you will look back at today as the day you took your first step toward turning a chart into a plan of action.

Get On The FastTrack