Corporate Earnings and Stock Prices: Is There Really a Correlation?

Remember 2008? Here's what happened after the S&P’s first-ever quarter of negative earnings

A lot of the research on Wall Street is driven by the notion that corporate earnings determine the trend of the stock market. During every "earnings season," this belief is perpetuated by the financial press. For example, on April 30, a Yahoo! Finance headline said: "Markets on a tear with strong earnings season." Of course, the implication is that the "cause" of the stock market rally is strong earnings. With the reporting of Q1 earnings about halfway through, we thought it would be a good time to explore the widespread belief that earnings drive the main stock indexes.

Investing in the stock market is as simple as keeping tabs on corporate earnings -- at least, that's the widespread belief.

The conventional wisdom is that if earnings are strong, expect a bullish trend. If they're weak, expect a downturn.

It's a nice and tidy investment approach that seems to make perfect sense. After all, corporations are in existence to make money, and if they exceed expectations, stock prices should skyrocket.

But, as EWI has pointed out time and again, investors are not governed by pure logic. They are governed by a psychology that swings from optimism to pessimism and back again, at all degrees of trend, regardless of factors outside of the market -- like earnings.

Let's make the point by using a historical example from Robert Prechter's 2017 book, The Socionomic Theory of Finance. Here's a chart and commentary: 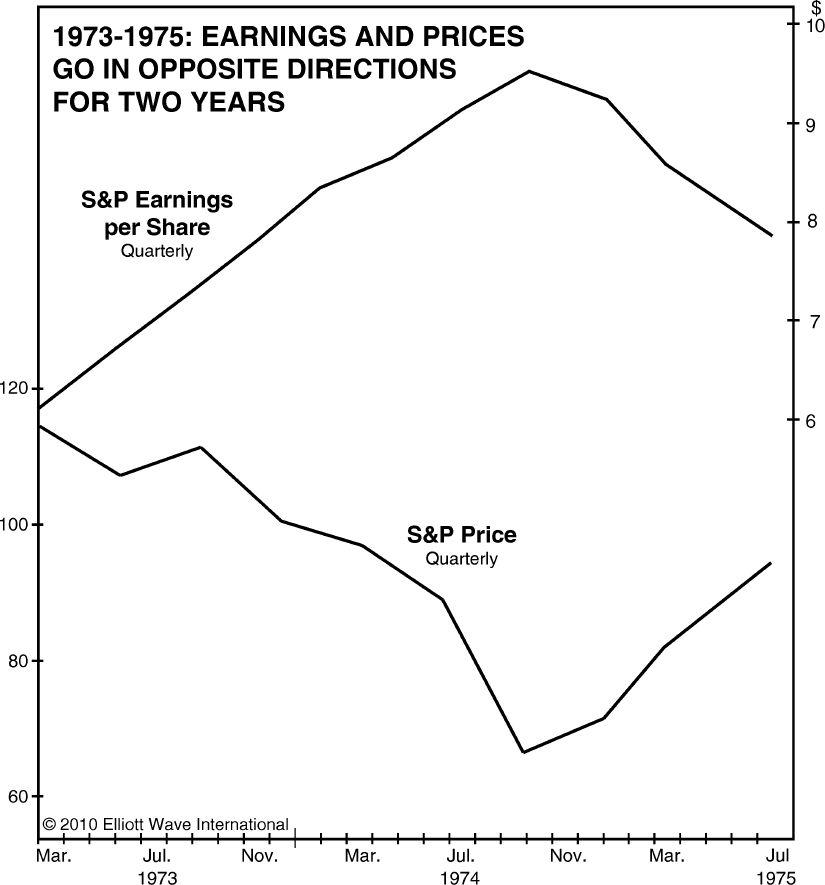 ... in 1973-1974, earnings per share for S&P 500 companies soared for six quarters in a row, during which time the S&P suffered its largest decline since 1937-1942. This is not a small departure from the expected relationship; it is a history-making departure. ... Moreover, the S&P bottomed in early October 1974, and earnings per share then turned down for twelve straight months, just as the S&P turned up! 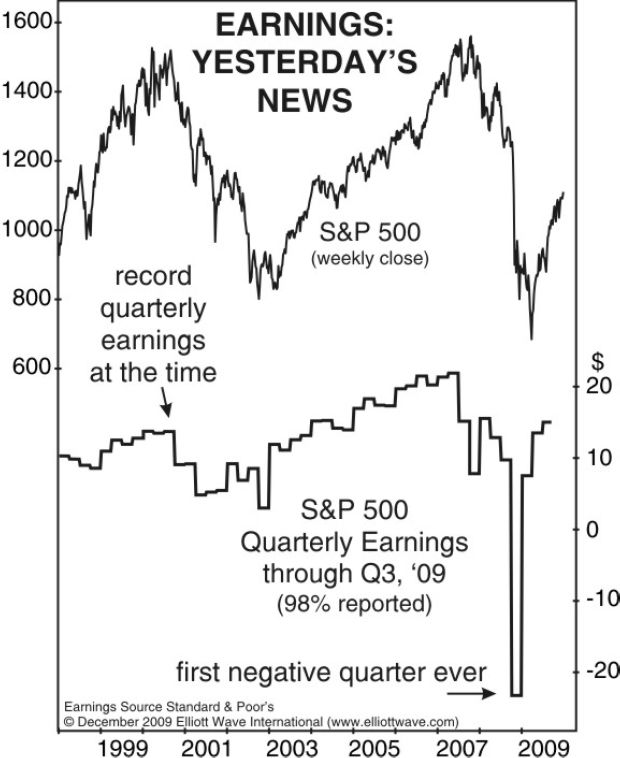 ...quarterly earnings reports announce a company's achievements from the previous quarter. Trying to predict future stock price movements based on what happened three months ago is akin to driving down the highway looking only in the rearview mirror.

You'll notice on the chart that the S&P 500 had its first negative earnings quarter ever in Q4 2008.

Even so, a rally started in March 2009 that has stretched for more than 10 years!

The belief that earnings drive stock prices is not the only "market myth." There are many more.