How to Outwit 99% of Investment Pros

Was COVID-19 a “bullish event"? No. Here’s the real answer why stocks rose as the pandemic raged.

Waves of social mood fluctuate in accordance with the Wave Principle and determine prices in financial markets.

Moreover, these same waves regulate the tenor and character of social attitudes and actions.

The key point is that social mood is the cause. It is endogenous. Prices in financial markets and events in society are the effects. They are exogenous.

However, most people believe the opposite is true.

Or, consider the widespread notion that scandals make people outraged. In truth, outraged people seek out scandal. Consider that when mood is positive, fodder for scandal is often dismissed.

You can also flip around the notion that nuclear bomb testing makes people nervous and say that nervous people test nuclear bombs.

If you were able to make that one counterintuitive leap that the same endogenous mass psychological swings that create patterns in the stock market also drive other headline social events, then you have already won half the battle in the market and you understand stock market movements better than 99% of industry professionals.

Social mood swings from extreme optimism to extreme pessimism and back again.

By the time that these social mood trends show up as major news or events (positive or negative), that's when the pendulum is set to start swinging in the other direction.

Recessions, scandals, nuclear testing and so on were mentioned as examples of what may occur during negative mood trends.

Let's add epidemics to that list. Yes, Elliott Wave International has observed a relationship between bear markets and infectious disease. 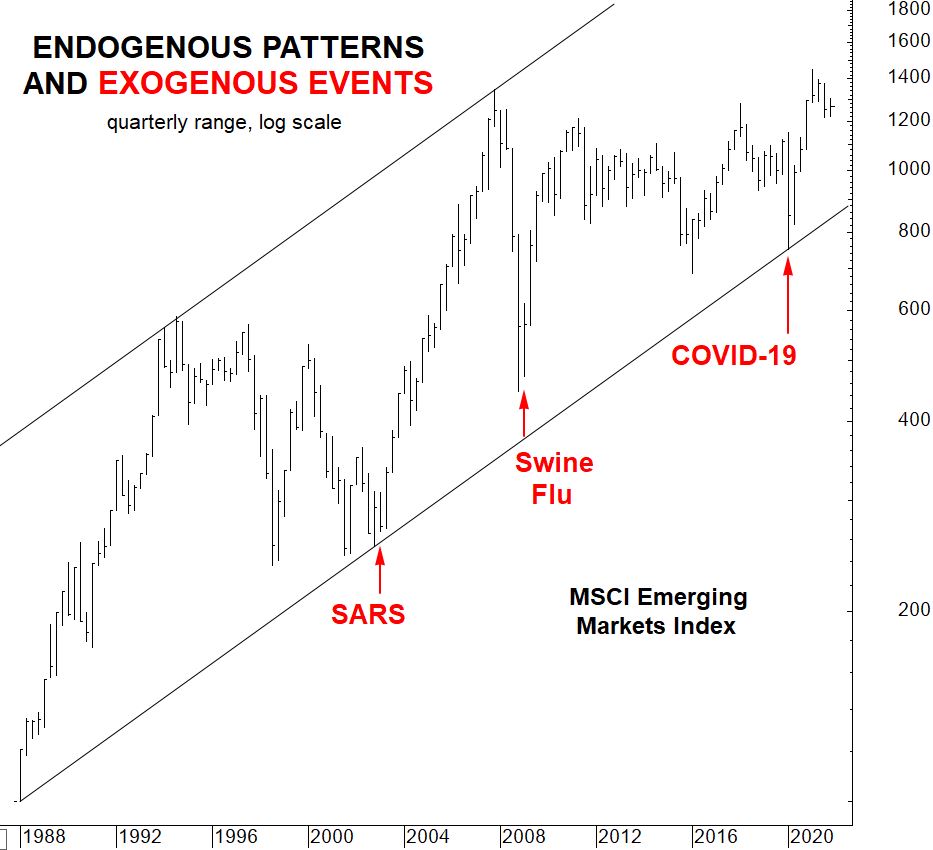 As you can see, an uptrend did ensue amid Covid-19.

However, it would be wrong to say that epidemics are bullish for the stock market. That's that "exogenous" thinking trap which was discussed above. A proper way to think about it is that when social mood is at its lowest, epidemics are more likely. That's why they have so often marked a bottom, not a top. As Mark said:

Notice that these three major infectious diseases spread widely toward the end of major bear markets.

This is invaluable information for any investor. Imagine having this knowledge back in March 2020, when the first wave of the pandemic hit and everyone panicked!

Elliott Wave International could help you spot similar moments going forward. All of our global analysts use the repetitive patterns of social mood to forecast some 50+ financial markets around the world.

Tap into their insights now by following the link below.

EWI's analysts set price targets for global stocks and bonds, cryptocurrencies, metals, oil and other markets... in accord with the Elliott wave model.

Learn the price targets our Elliott wave experts have set for key global financial markets -- and why.

You may do so by reading our in-depth coverage of 50+ worldwide financial markets via our Global Market Perspective.

If your main interest is the Asian-Pacific, you may elect to subscribe to our Asian-Pacific Financial Forecast. At the beginning of each month, you get a 30-60 day look ahead at the markets. With insightful charts and text, this publication lays out expected trends and turns in this region.