This technical indicator has been "cratering" since Nov. 7

At the end of a trading day, most stock market investors have two simple questions: Did the indexes close up or down, and, by how much?

Yet, investors who want to understand "what's next" also know that it pays to look at more than the daily close.

For example, back in early October 2007, bullish investors were pleased as punch that their portfolios were increasing in value. Stocks were in rally mode.

Yet, our Oct. 5, 2007 U.S. Short Term Update looked beyond the daily price closes to assess the momentum of the rally. Here's a chart and commentary: 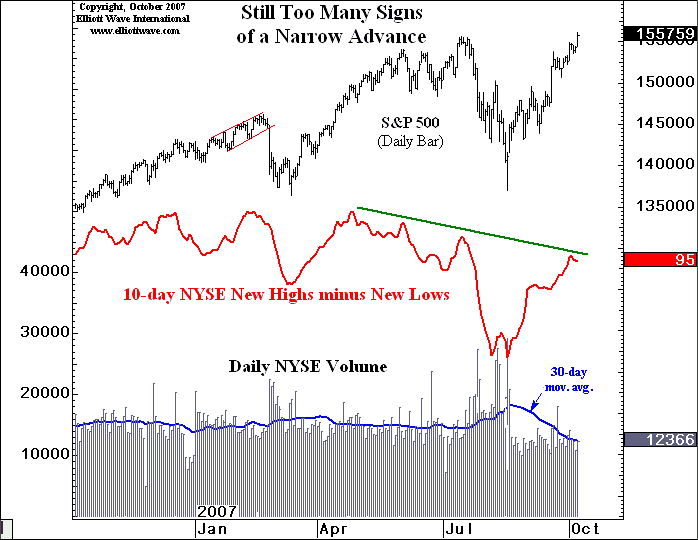 Note how weak the volume pattern has been in the push from the August 16 low, which is one of the reasons that we keep saying the rise is "narrow." The middle clip on the chart shows the 10-day average of NYSE New Highs minus New Lows, showing yet another indicator that is lagging as prices make new highs.

Well, just four days later, the S&P 500 index peaked ... and then surrendered more than half of its value through early March 2009.

Fast forward to November 2019. Many investors, including professionals, have watched the stock market rally and want to be on board (Marketwatch, Nov. 12):

A "fear of missing out" triggered a huge switch by fund managers from cash into stocks, according to a survey conducted by Bank of America Merrill Lynch.

But, are these fund managers increasing their allocation into stocks at precisely the wrong time? 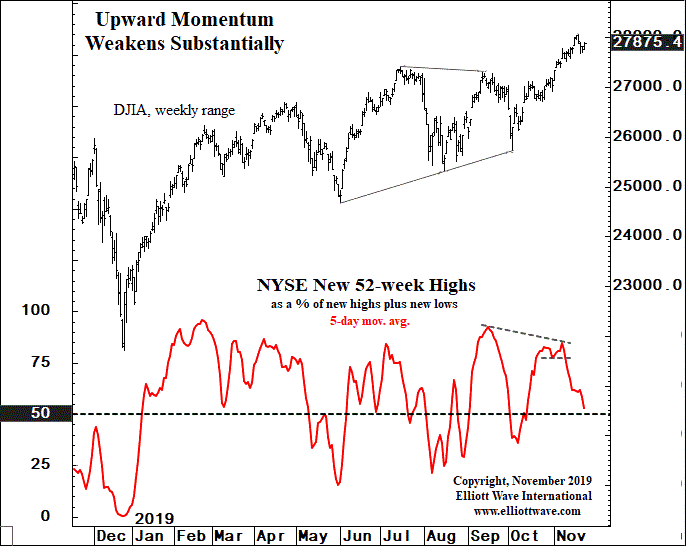 The chart updates the NYSE new highs as a percentage of new highs and lows, which has been cratering since November 7. An index of the junkiest of junk bonds made a new 10-month closing low yesterday, which shows that the foundation of speculative intensity for the stock rally is cracking.

Of course, this doesn't mean the stock market will top in a matter of days. Even so, the rally's waning momentum, in conjunction with Elliott wave analysis, suggests that many speculators will be completely surprised by the stock market's next big turn.

Learn what our Elliott wave experts are telling subscribers, risk-free for 30 days. Look below to find out more.

How to Stay Ahead of Big Turns in Financial Markets

Yes, EWI's analysts regularly consult more than 100 time-tested technical indicators which have proven highly helpful to our subscribers over the years.

Yet, the single most important factor in our analysis is the Elliott wave model.

... the Wave Principle often indicates in advance the relative magnitude of the next period of market progress or regress.

Most speculators opt into the "widely practiced analytical error of forever projecting today's trends linearly into the future."

The Elliott wave model helps free you from this error.

Tap into the insights of our Elliott wave experts now. There's no obligation for 30 days ...