Stocks: The Most Important Indicator (Other Than Price)

"Volume contracts with the bounce"

An interviewer once asked Elliott Wave International President Robert Prechter: "Under the Wave Principle, what is the most important thing to watch other than price?"

High trading volume is a chief characteristic of new and healthy bull markets, and also an indicator that a bear market is still going full steam.

On the other hand, low trading volume -- in both bull and bear markets -- indicates a lack of conviction among investors. Hence, the prevailing trend may be on the cusp of a turn.

For instance, our June 2007 Elliott Wave Financial Forecast said that New York Stock Exchange "10-day breadth and 10-day up/down volume shows that the market's upward momentum has been slowing since April, while the blue-chip averages continue their upward push."

Indeed, it did turn out the stock market was running on fumes. The DJIA topped four months later.

By contrast, this next example is of a high-volume market.

In January of this year, the Elliott Wave Theorist noted a "bullish volume and breadth thrust" on January 4, suggesting higher prices. The market continued to rally for much of the next four months.

Now, let's take a look at the latest on market volume from our May 22 U.S. Short Term Update. Here's a chart and commentary (wave labels available to subscribers): 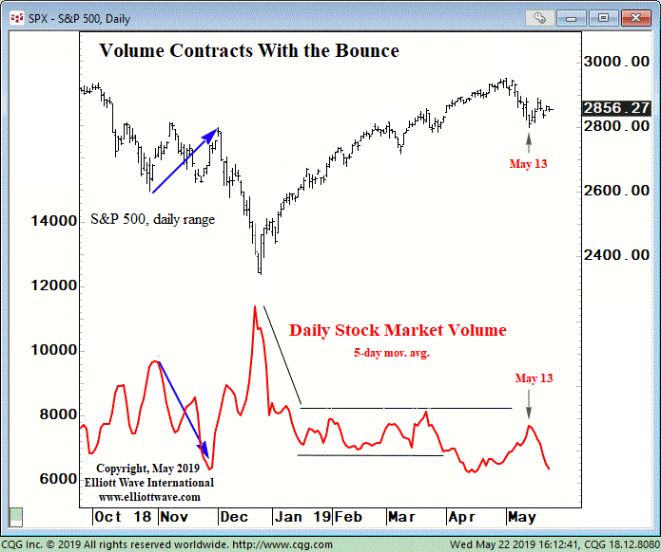 The chart shows that the rise from the May 13 low has occurred with contracting volume. The 5-day average is again near its lowest level since the market's rally started last December.

You also get our latest insights into the stock market's Elliott wave pattern -- which strongly suggests where prices are headed next. It's a picture worth seeing -- because, after all, Elliott waves still take precedence over volume.

Learn about our 30-day, risk-free trial -- just below.

Investors Can Be on the Right Side of the Trend for a Long Time. BUT …

… When an unexpected major market turn arrives -- those gains can shrink with shocking speed.

Indeed, the books of brokerage houses show that this is what usually happens after the completion of most major market cycles.

You can be the exception to the rule.

Prepare for what EWI's analysts see just ahead via a 30-day risk-free trial. Get details below …