The "Space Race": What Stock Investors Should Know

Billionaire CEOs Richard Branson, Jeff Bezos and Elon Musk each have ambitions in the lofty frontier of space tourism.

For example, here's a Sept. 30 article excerpt from the Atlantic:

Elon Musk has laid out an ambitious future for his spaceship project, the effort to deliver people to the moon and Mars.

What does this "space race" have to do with the stock market? Well, it could mean that investors are facing an important juncture.

Our August Elliott Wave Financial Forecast explains with the aid of two charts, and here's the first one, which shows the Dec. 6, 1968 Time magazine cover titled "Race for the Moon" in relation to the DJIA's price action: 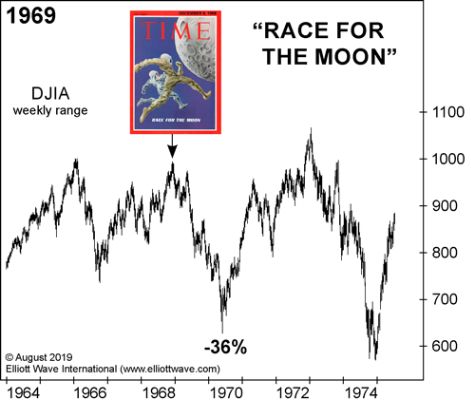 [That 1968 cover published] two days after the speculative peak of Cycle wave III. The chart shows the market's behavior that followed, a 36% decline in the Dow to May 1970.

Now look at another chart which shows a July 22, 2019 Time magazine cover titled "The Next Space Race" -- yes, almost identical to the one published in December 1968: 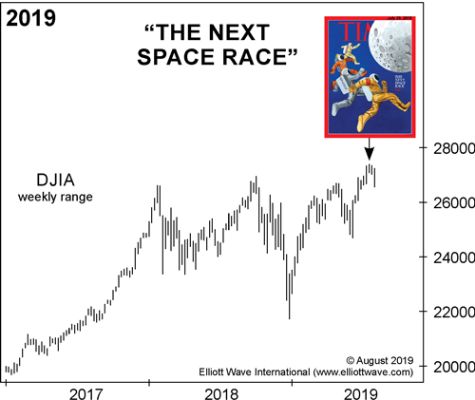 The desire to explore the great beyond is a peak manifestation of a high-level of optimism. As a negative mood trend intensifies, the urge that Time magazine calls the "primal power" of space flight will dissipate just as it did in the 1970s.

Does this similar Time magazine cover about space mean a significant stock market downturn is imminent -- like what happened in 1968?

Well, it is something to keep in mind, along with other indicators and the DJIA's Elliott wave pattern.

Get detailed insights from our stock market forecasters without any obligation. Look below to learn how to get started.

Elliott Wave Junctures: The Right Place at the Right Time

Sometimes, sheer luck is why we find ourselves in "the right place at the right time."

Yet in the world of investing, you can go broke before you get lucky -- if you don't have a proven method for participating in financial markets.

We invite you to take a close look at the Elliott wave method.

This excerpt from Frost & Prechter's book, Elliott Wave Principle: Key to Market Behavior, provides insight as to why:

When ... the apparent jumble gels into a clear picture, the probability that a turning point is at hand can suddenly and excitingly rise to nearly 100%. It is a thrilling experience to pinpoint a turn, and the Wave Principle is the only approach that can occasionally provide the opportunity to do so.

So, yes, applying the Elliott wave method can help you be at "the right place at the right time."

If you prefer, given most of us have busy lives, our Elliott wave experts can do the work for you.

Learn how to tap into their insights now, risk-free for 30 days. Look below to learn how to get started ...