Question: What do you need to know about the stocks you trade in order to -- well -- trade those stocks successfully?

Mainstream wisdom cites "fundamental" measures of value; like the stats on the back of a baseball card, these markers are a guide to the company's future:

YET -- we know that the most important measure of "what's next" for a company's share price has nothing to do with fundamentals.

Take this chart of a popular NASDAQ issue:

Right away you can see that since April, prices have rallied strongly to their highest level ever. This surge earned the company a Bullish Rating from a popular sentiment indicator on June 10.

This June 10 news source said that the company -- Zai Lab Limited -- has become one of the most "notable stocks to test new highs in 2020."

"The catalyst for this interesting swing was the company's recent earnings report." Specifically, the Q1 earnings report that showed a profit of $4.64 million. That, with increased revenue and free cash flow means quote "All told, ZLAB has strung together solid data and demonstrated underlying fundamentals."

But in truth, the real "catalyst" for ZLAB's upswing was not its underlying fundamentals, which only recently became clear. Rather, it was the company's Elliott wave pattern that anticipated a rally to new highs --

MORE THAN TWO MONTHS AGO!

In the April 2, 2020 Trader's Classroom, editor Jeffrey Kennedy saw the chart of ZLAB and didn't ask what the company was, what it did, or how it performed in its latest earnings report.

Jeff saw one thing when he looked at ZLAB's chart; namely, a clear Elliott wave pattern unfolding since October of 2019. So, on April 2nd 2020, Jeff showed subscribers a version of this chart: With waves 1 2 3 and a fourth wave pullback in place, the next move should likely be a wave 5 rally to new highs, as projected here. 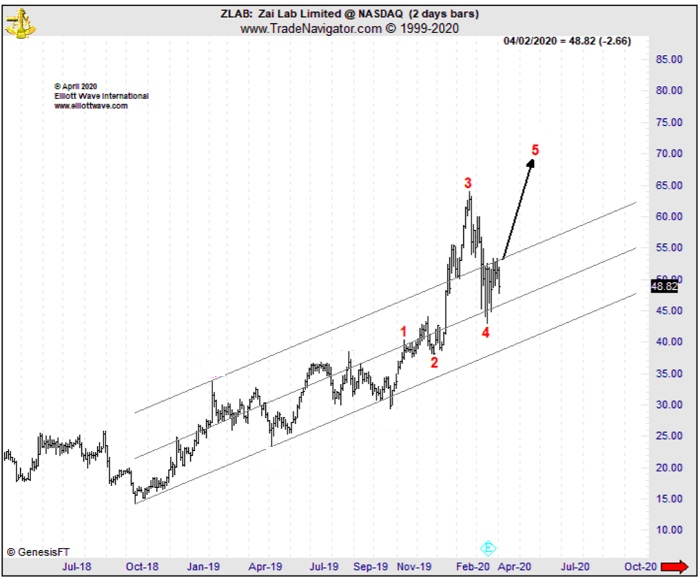 "So, this issue looks very promising moving forward. Keep an eye on it. If we start clipping above the $55 handle, I think that could open the door on a run to possibly new highs well beyond the $65 mark."

From there, ZLAB followed Jeff's script to a T, rallying to new highs beyond the $65 mark.

So, don't wait: Step up to the Trader's Classroom plate and find out where the next high-confidence trade set-up will occur. See below for more