Why This Stocks Indicator Should Grab Your Attention

See a chart that shows "a 15-month high"

You have to look beyond a single data set at times to get the real story.

For example, if player A and player B each scored 20 points in a basketball game, that would not necessarily mean they displayed equal shooting ability. If player A was on the court the whole game, and player B only played the second half, player B's 20-points would obviously be more impressive.

Statistics are also relative in financial markets, as this chart and commentary from our April 8 U.S. Short Term Update reveals: 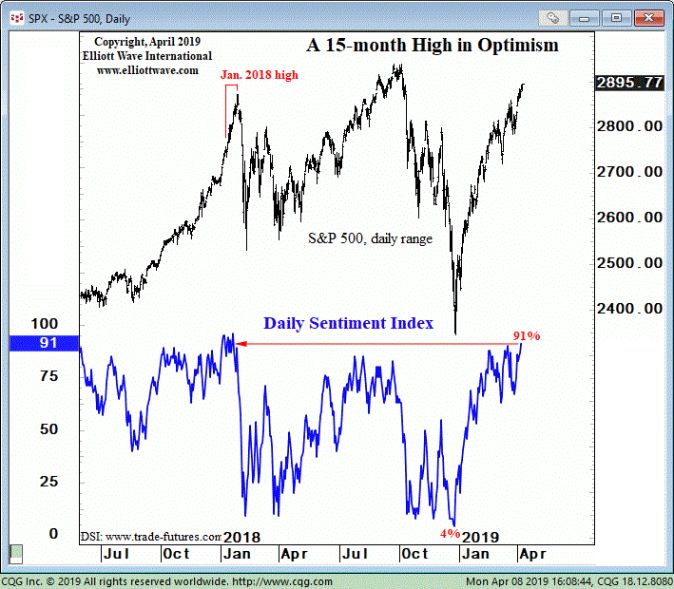 Not only is the absolute level of optimism at a 15-month high, but the relative level of optimism is even higher. In January 2018, with prices at new all-time highs, an analyst might expect measures of optimism to be extreme. And they were, as the Daily Sentiment Index (trade-futures.com) pushed into the mid-90% range. This past Friday, April 5, the DSI rose to a new 15-month extreme, but the S&P 500 is not at a new price high. So, sentiment relative to the current price level is even greater.

This overwhelmingly positive sentiment is also expressed in the financial press.

Why the Bull Has Room to Run

And, talk about optimism on overdrive. Look at this from Marketwatch on April 9:

Well, if you're familiar with EWI's publications, you know we've long ago debunked the myth that earnings drive the larger stock market trend. But most observers do believe earnings are key to the stock market's health, and the fact that some observers are brushing aside even this belief is telling.

But, it's not wise to use sentiment measures alone for portfolio decisions. One does not know exactly how long a sentiment extreme will persist.

Hence, sentiment measures should be used in conjunction with technical indicators -- like Elliott waves.

Right now, you can find out what our Elliott wave experts are saying about time-tested indicators, in addition to the chart patterns of the DJIA and S&P 500, risk-free for 30 days.

Look below to learn more.

What Will Your Portfolio Look Like a Year from Now?

Or, six months down the road? Or, just a month from now?

These are the bottom line questions that most investors ask themselves.

And, our Elliott wave experts do their best to help you prepare your portfolio for what they see for financial markets in the near-, intermediate- and long-term.

Get their latest forecasts now, risk-free for 30 days. Learn how to get started just below …