Why the Fed's Rate Hike Means Nothing to the Stock Market

But does the direction of interest rates determine the stock market's trend?

Despite the long-held Wall Street belief that it does, we have found no evidence of a consistent correlation between rates and the stock market.

Sure, there have been plenty of times that stocks have fallen as interest rates rose. A prime example is the 1973-1974 bear market when stock values were nearly cut in half.

And, regarding another long-held belief, there have been times when stocks rose as interest rates fell. That was the scenario from 1984 to 1987 when stocks more than doubled.

But it's also true that stocks and rates have trended together.

Review this chart and commentary from The Elliott Wave Theorist:

The chart shows a history of the four biggest stock market declines of the past hundred years. They display routs of 54% to 89%. In all these cases, interest rates fell, and in two of those cases they went all the way to zero!

Now, getting back to the worry that the Fed's just-announced rate hike will hurt stocks, look at these times when stocks and rates trended higher together: 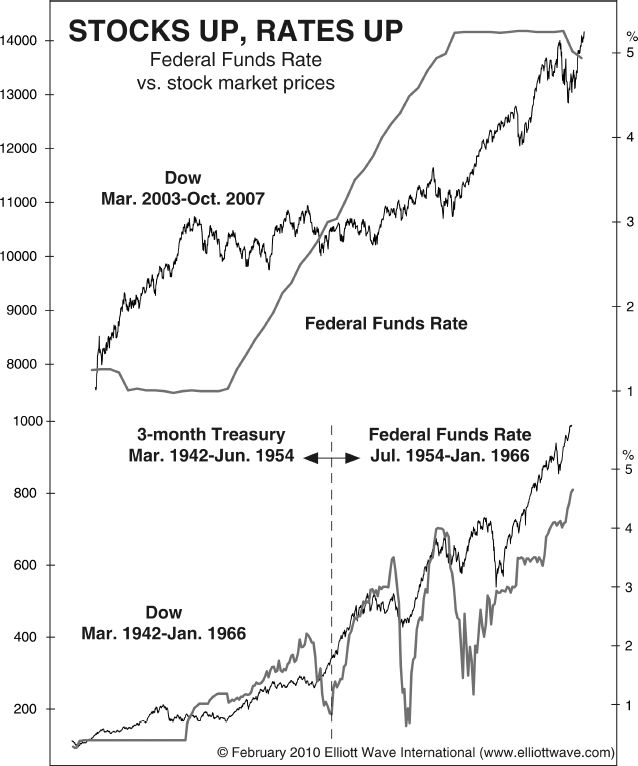 The bottom line is that no external, exogenous cause -- like interest rates, trade deficits or even wars -- governs the stock market's trend. We know it's a bold claim, but in our publications, we've presented evidence to support it.

The main thing to keep your eye on is the market's collective psychology, the true driver of trends. Sounds good, but how?

The Elliott Wave Principle helps you to identify high-confidence turning points in the trends of financial markets.

As we see it, the Dow Industrials is now approaching one such juncture.