The 2 Most Important Keys to Successful Trading

Examples from Whole Foods Market (WFM) and Reynolds American, Inc (RAI) show you what to do (or not) to trade successfully with Elliott.

After 20 years of experience applying the Elliott Wave Principle, Senior Analyst Jeffrey Kennedy says that it remains the one tool that will tell him -- down to the tick, to the pip, even to the penny -- when his forecast is no longer viable.

That, according to Kennedy, is one of the two most important keys to successful trading:

"Know where you are wrong."

In his May 8 Trader's Classroom educational video (formerly Elliott Wave Junctures), Kennedy shows subscribers how to acquire that knowledge when revisiting an earlier forecast that didn't work out. This lesson was adapted from our Trader's Classroom service, and also explores the second of Kennedy's Keys to Successful Trading:

WFM's forecast was right and RAI's was wrong. While price evidence was compelling for both issues, the forecast in WFM was in the direction of the trend and RAI's incorporated top picking. Here's what happened:

Price evidence called for new highs in Whole Foods Market, Inc. on May 1. We had a clearly defined uptrend, a three wave move in the direction opposite the primary trend, and the move to the downside was contained within parallel lines: 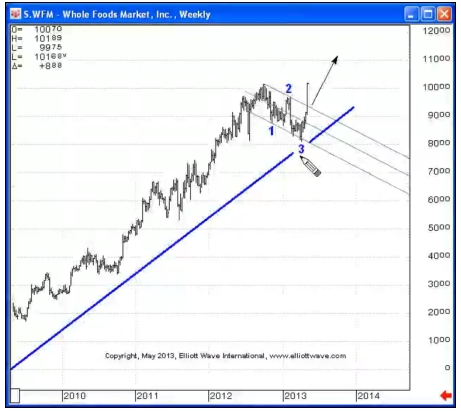 Additionally, we had a double closed-key reversal when the low was made, as well as some bullish divergence on the smaller timeframes. Price evidence was very strong that this market would continue to new all-time highs, so my outlook was bullish.

The bullish outlook in WFM required the April low of $81.39 to hold. The trend was clearly up from 2009 into 2013. From an Elliott Wave perspective we knew that this was a countertrend move with an A-B-C structure (a corrective wave pattern within a larger trending market). We had the wind at our back and were not "picking a top." We simply looked at the price evidence in support of a further rally. 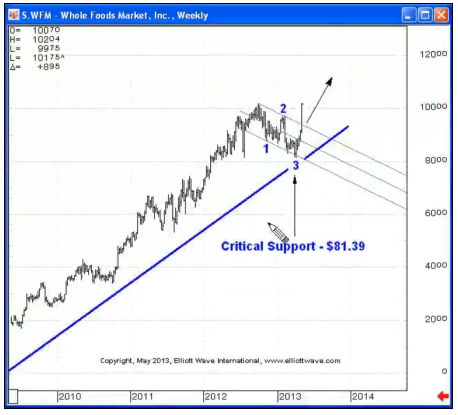 Conversely, the following example in Reynolds America, Inc. did not work out. 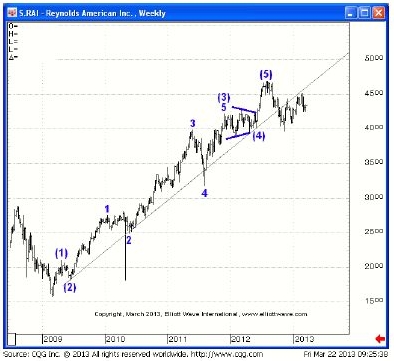 Unlike the successful WFA example, I was not trading with the trend. Instead, I was looking for a "top."

Yet I was able to prevent a losing trade from becoming a devastating trade because I could use the Elliott Wave Principle to "know where I was wrong."

This bearish wave pattern was viable only as long as prices held below the February high of $45.17.

Once prices exceeded Critical Resistance, I knew not to look to the downside -- that my outlook was no longer viable: 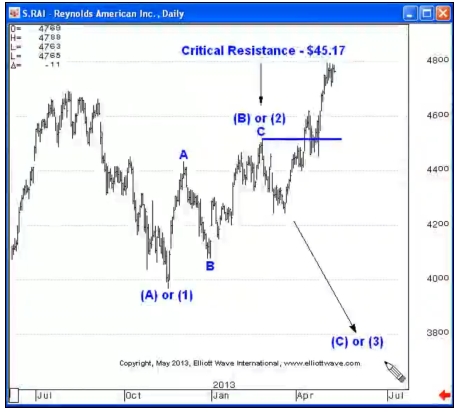 How (and when) a Textbook Pattern Came to Life: See the Euro-Yen Move for Yourself