Fact: 90% of traders lose money. Also a fact: 80% of all day traders quit within the first two years. And, according to a July 16, 2017 Forbes article titled "Day Trading: Smart or Stupid?" many traders are "moaning and groaning" sleep-deprived suckers "trying to become rich... with 32-ounce bottles of Pepto-Bismol prominently displayed on their desks."

The question is, why? We can successfully put men on the moon. We can perform open heart surgery. We can map the human genome. So why is it so hard to stay on the right side of financial markets?

The reason is simple. What should be a completely emotion-free zone -- the trading room "floor" or brokerage office or personal computer screen -- is often a breeding ground for elevated heart rates and sweaty palms. We may know the odds, but that doesn't stop mainstream culture from fanning the flames of blind hope in a bull market that can't quit. Here, these recent news items paint the emotionally charged scene:

"5 Ways to Make Millions in the Stock Market" (Huffington Post)

"U.S. Stocks Surge! The Bull Market is Back" (Forbes)

It's not rocket science: Emotion is the number one enemy of successful trading. Which means the number one ally is UN-emotional, objective market analysis that doesn't focus on the news, or which way the crowd is running. Some traders know its name: technical analysis.

For the past 20-plus years, Elliott Wave International's chief market analyst Jeffrey Kennedy has personally tried and tested dozens of technical tools, from old-school to cutting-edge, even developing his own in the process. The end result is a what Jeffrey calls a "holistic" arsenal for identifying high-confidence trade set-ups in any liquid market, and on any time frame.

In one of his most popular educational videos "4 Keys to Crafting Rock-Solid Trades," Jeffrey outlines four simple steps of the "pre-flight checklist" for an emotion-free trading strategy. Take steps one and two:

(Editor's Note: Right now, you can get Jeffrey Kennedy's 4 Keys to Crafting Rock-Solid Trades for free! Follow the link to begin)

As an Elliottician, the patterns Jeffrey looks for are the five core Elliott wave patterns, each of which adhere to specific rules and guidelines. Take, for instance, the impulse wave, pictured below. Its middle part, wave 3, travels far and fast in a short period of time.

Here's a clip from the video where Jeffrey reveals a common "tell" of third wave price action -- acceleration gaps:

How about applying this simple tool to a real-world market? Well, here we go back to the November 29, 2017, Trader's Classroom, in which Jeffrey identified a telltale impulse wave underway on the price chart of the newly minted, Nasdaq-listed IPO for the popular video-streaming company Roku Inc. (ticker symbol: ROKU). A dead giveaway of the impulse move was the large acceleration price gap in wave three, pictured here: 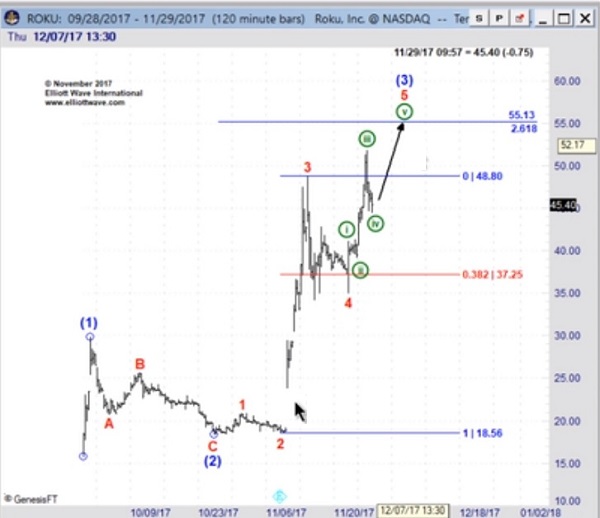 Remember that emotionally charged mainstream culture we talked about at the beginning? Well, following its September 28, 2017 IPO debut, the street was cuckoo for ROKU, which soared 67% on its first day of trading. Here, the following news items from the time capture the hype:

But again, amidst the sound and fury, Jeffrey Kennedy kept his emotions in check. In fact, in the November 29 Trader's Classroom video, Jeffrey provided a breadth of historical evidence showing how, in many cases -- GoPro, GrubHub, Redfin, Snapchat, and more -- IPOs will enjoy an initial "honeymoon period" only to come crashing down for much-needed "foundation building" before reclaiming the upside:

With prices nearing the end of an Elliott wave impulse, Jeffrey warned that ROKU was similarly vulnerable:

"We are currently in that honeymoon period in Roku. It's easy to get excited about an IPO and you want to, when everything is awesome.

"From an Elliott wave perspective, within wave five, it appears we need another push higher to above 51.8. I do like the upside and it's natural to do so because hey, we're in the honeymoon period. But remember, following that time, the pressure may be to the downside."

The next chart moves forward in time to show how Roku rose into Jeffrey's cited target only to lose its footing in a multi-month decline:

The facts don't lie. Trading successfully is hard. But as Jeffrey Kennedy has learned after decades of discipline and practice, the best defense against becoming the 90% is objectivity.

USDZAR: The Rand Was Supposed to "Languish." So Why Did It Rally to 8-Month Highs?

What NOT to Do When Using Elliott Waves (TSLA in Focus)

Bias is Every Trader's Enemy. This is How You Remove It.

Here's How You Can Make Financial Decisions with Confidence

When Is The Right Time To Exit a "Good Trade"?

The 5 Fatal Flaws of Trading