DDD Goes B-B-Bananas! It All Started with a January 7 Earnings Beat... Or Did It?

See how Elliott wave analysis foresaw this flatlined stock coming back to life -- on December 1!

So far in 2021, 3D Systems Corporation (NYSE: DDD) has done the unthinkable; namely, it's rallied. In fact, on February 4, the 3D printing company made a carbon copy of a giant bull when prices soared to their highest level since 2014. After years and years of going nowhere, many DDD investors were in d-d-disbelief at the sudden resurgence. Some couldn't even believe their eyes, as this first line of a January 7 Motley Fool infers:

Which brings us to the million-dollar question: What in the world caused 3D to volte-face from a decade-low to a 7-year high in a single month? The answer, according to the mainstream experts, is the company's January 7 earnings report, which blew expectations into another galaxy, an "earnings beat of historic proportions." (January 7 Motley Fool)

What's more, 3D allegedly stoked its now raging bullish fire with plans to expand into the field of regenerative medicine via bioprinting solutions used for organ transplants -- ALL OF WHICH led to this emphatic endorsement of DDD by Wall Street wizard Jim Cramer:

There's just one problem with this timeline; namely, 3D's bullish potential was "real and back" as early as December 1 -- more than a month before its supposed game-changing earnings beat on January 7.

The stock's Elliott wave pattern foretold the rally early. Here, we rewind to our own December 1 Trader's Classroom lesson, where editor Jeffrey Kennedy presented the following price chart of DDD: 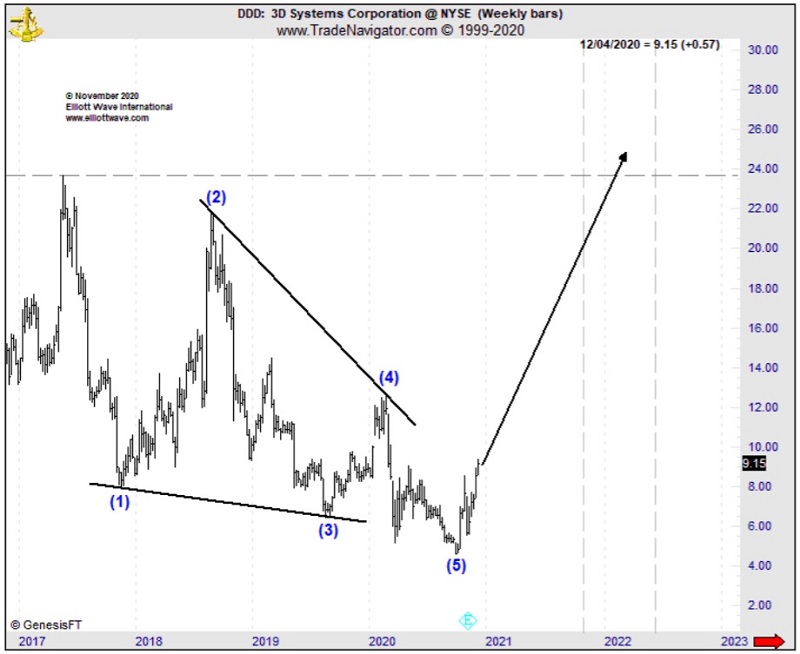 YES: With the stock at a 10-year low, Jeffrey identified price action since 2017 as a classic ending diagonal Elliott wave pattern. This pattern, pictured below, signals the termination of the larger trend -- bearish trend, in DDD's case -- thus, tipping investors off to the start of a new movement in the opposite direction. In DDD's case, up. 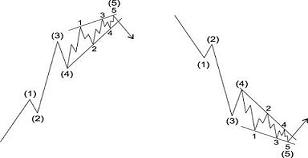 What comes next is best explained by Jeffrey, in this clip from his December 1 Trader's Classroom video lesson. Press play to listen:

From there, DDD indeed began its ascent, retracing its entire decline from 2017, as forecast. In his January 11 Trader's Classroom, Jeffrey updated DDD's labeling and raised projections:

"We've seen the complete reversal back to beyond the origin of the pattern. Admittedly, though, I was not looking for it to happen within the first few weeks in January. So this is a surprise, but it's quite a nice surprise.

"Recent price action is best identified as a wave three of three, so I still think we have significant upside available in 3D Systems." "Significant upside" was exactly what followed, as you can see on this chart of 3D as of February 4. Not every Elliott wave forecast works out like this, of course. But the waves are great at showing you which way the wind blows well in advance.

The alternative is "fundamental analysis," which almost inevitably alerts investors only after major trend changes have already taken place.

Our Trader's Classroom brings subscribers new lessons three times a week -- often, with a real-time opportunity like the one you just saw.

That's What an Elliott wave Opportunity Can Look Like.

Fact is, the mainstream experts didn't see DDD as a "real" opportunity until much of that advance was already in the rear view. "Fundamental analysis" always follows market turns.

Our Trader's Classroom equips traders with tools to identify turns in advance -- and manage risk along the way. Germany’s Bonds: How to Spot Rising Yields Without Reading the News

U.S. Treasury yields aren't the only ones that have been rising. Just like here in the U.S., you can find a lot of "fundamental" explanations for the moves in German bonds. But watch how an Elliott wave pattern warned of these developments as they were just starting. Groupon (GRPN): See the “Value of a Blank Price Chart”

If you've ever applied technical indicators to a price chart, you know the challenge -- namely, where do you even begin? Watch our Trader's Classroom editor walk you through a "blank chart" of GRPN to show you how to spot simple levels of support and resistance, for starters -- and get an idea as to what's next. Beware of This Classic “Tip Off” Behavior in the Stock Market

This time-tested indicator provided a warning before the historic 2007 stock market top, and here in 2021, investors should focus on this indicator again. Find out why.