How to Set Protective Stops Using the Wave Principle

Over the years that I've worked with Elliott wave analysis, I've learned that you can glean much of the information you require as a trader - such as where to place protective or trailing stops - from the three cardinal rules of the Wave Principle:

Let's begin with rule No. 1: Wave two will never retrace more than 100% of wave one. In Figure 4-1, we have a five wave advance followed by a three-wave decline, which we will call waves (1) and (2). An important thing to remember about second waves is that they usually retrace more than half of wave one, most often making a .618 Fibonacci retracement of wave one. So in anticipation of a third-wave rally - which is where prices normally travel the farthest in the shortest amount of time - you should look to buy at or near the .618 retracement of wave one. 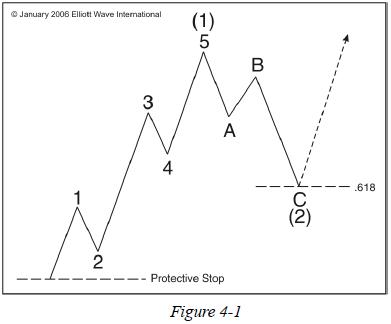 Where to place the stop: Once a long position is initiated, a protective stop can be placed one tick below the origin of wave (1). If wave two retraces more than 100% of wave one, the move can no longer be labeled wave two.

Don't have a login?

No worries. Get instant access to rules 2 and 3 as part of the Best of Trader's Classroom eBook when you join Club EWI, our free educational community.

Since 1999, our Trader's Classroom editor, Jeffrey Kennedy, has produced hundreds of actionable trading lessons to help traders spot opportunities in their own charts. This 45-page, chart-packed ebook gives you our top picks: the 14 best lessons every trader should see.