The Trend Is Your Friend: Easier Said than Done

The time to befriend US Steel Corporation (NYSE: X): Before OR After the stock soared 40%-plus in value?

"The trend is your friend," say the mainstream financial motto makers. It's right up there with "Dance like nobody's watching!" on the scoreboard of catchy platitudes.

In theory, it means a market's existing trend is likely to continue so the smart investor passes go, gets on board, and enjoys the ride. But in reality, it's not so open and shut. For example, when exactly does a trend become a trend? And can you prepare for, say, an uptrend even if prices are falling?

The answer depends on the kind of forecasting tools you have.

Take, for instance, the venerable Big Board listee US Steel Corporation, ticker symbol X. This chart of the stock shows that after trending sideways for three solid years, the stock turned up in late October 2020 and embarked on a powerful rally that saw prices double to 3-year highs this August. 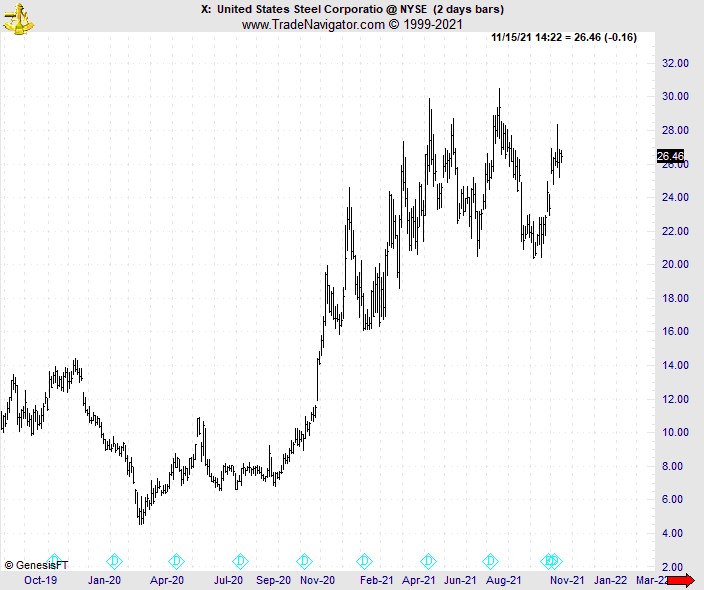 By October and November, X had become the new darling of both Wall Street and main street alike. An October 22 Business Wire revealed that US Steel was named "to Newsweek's List of the Most Loved Workplaces for 2021." 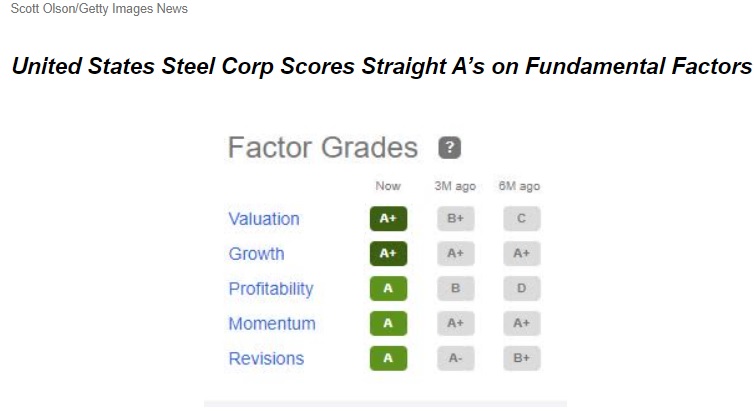 Here's the thing: These bullish accolades for US Steel didn't come early in the stock's bullish trend. They are from October and November -- of THIS YEAR, after prices doubled AND after the United States House passed its long-awaited infrastructure bill on November 8.

That bill, dubbed a "once in a generation" windfall for the steel industry, will "direct billions of dollars of investment into roads, rails and public transportation. (November 8, 2021 The Street)

And maybe this will indeed add fire to X's rally. Or maybe it won't. Often, "good news" marks a market top, not a bottom.

The real question is, was there a way to get onboard X's rally early with confidence?

Not if you were looking for mainstream advice last winter, when US Steel was just beginning its ascent. Then, the popular experts gave US Steel a "C" for CONFLICTED on its fundamental report card:

By contrast, if you're looking at markets through the lens of Elliott wave analysis, it's entirely possible to recognize major trend changes early on. In fact, in our December 24, 2020 Trader's Classroom, editor Jeffrey Kennedy presented this chart of U.S. Steel in which he labeled the "nice big movement to the upside" as a "clean, clear, classic impulsive structure" for a big rally.

The month's long setback since then was a fourth wave pullback. Thus, the stage was set for a resumption of the larger uptrend for wave 5. 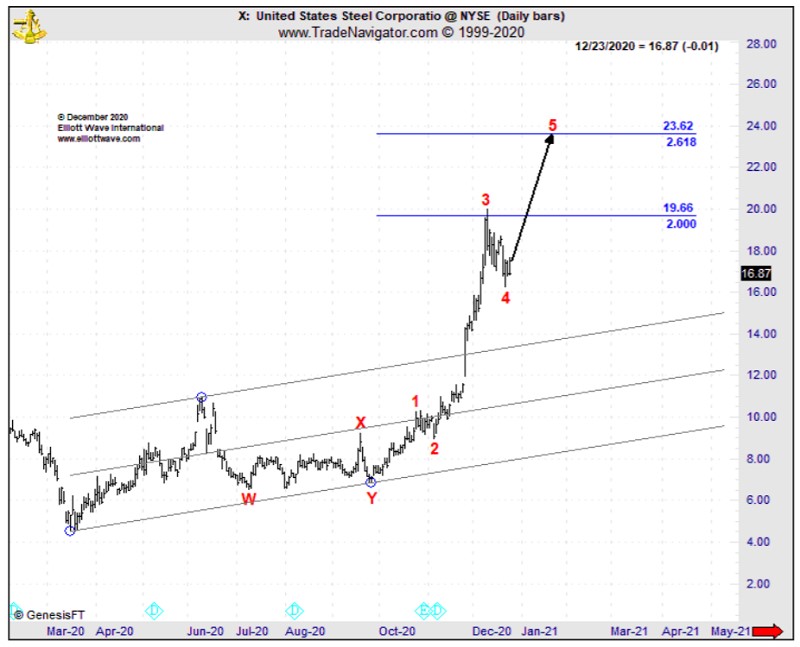 "I don't want to project what I think about US Steel to influence where I think prices should go. That's where you get into trouble.

"I don't know anything about steel. I don't know if the industry is bullish or bearish. I'm letting the chart label itself and in so doing, we can come up with a very confident view moving forward; we still have higher to go here."

To be exact, higher to go in a rising fifth wave.

From there, X soared 40%-plus to 3-year highs in mid-August. If you're familiar with Elliott wave analysis, you know that a fifth wave move can take prices very far. But ultimately, it doesn't signal the start of a larger trend. Rather the opposite.

Jeffrey Kennedy's Trader's Classroom lessons may not give you a certain future; but they will identify where high-probability setups lie in the world's leading ticker symbols AND how you can apply the lessons of Elliott to any market, on any time frame.

Our Trader's Classroom is where education meets action. Each lesson provides charts, analysis and in-depth explanations to help you meet opportunities when they arise.

Act now to change how you see markets forever.