When Wave Patterns and Timing Align, Opportunities are Made. In Focus: UNP

In April, mainstream analysts couldn’t get a clear view of Union Pacific’s future. Through the Elliott wave lens, though, the stock’s next move was undeniable

On Friday, June 24, those looking up into the sky before sunrise may be able to catch a rare cosmic event: For the first time in 18 years, five possibly even six planets will line-up in the exact order as their orbits around the Sun. 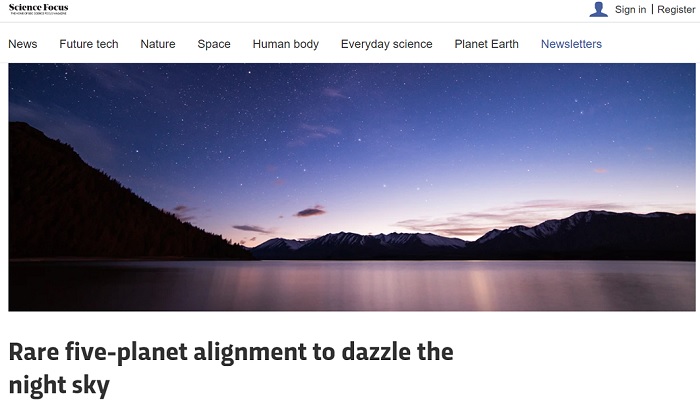 The brightness created by this unique planetary positioning will alight the entire east-northeast horizon in a blaze of celestial unity.

Unfortunately, back on earth, a not-so-rare misalignment will be playing out in the mainstream financial sky. It occurs once every 18... minutes and sees the popular pundits scattered all over the financial galaxy, holding totally opposing viewpoints as to where certain markets are trending.

In April, UNP was at a crossroads. This chart shows prices had slipped off their multi-year long bullish track and were down from all-time highs set on March 30. The million-dollar question for investors was: is UNP set to resume its northbound course -- or continue falling? 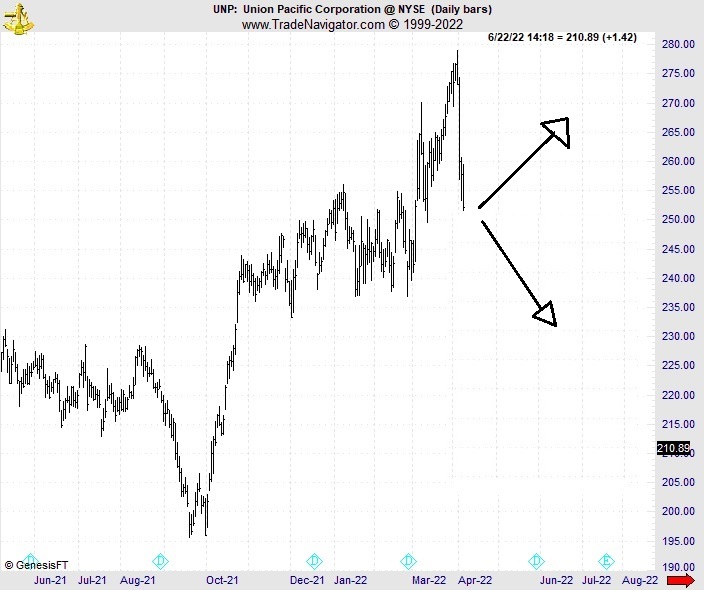 But, according to the experts, the answer to that question was totally eclipsed by divisiveness. One April 4 Yahoo Finance looked at the constellation of factors in UNP's technical and "fundamental" backdrop and saw a clear, glowing Taurus (or bull) staring back. From the article:

"Rising optimism among Wall Street analysts about the future earnings of this railroad is a solid fundamental factor that enhances the prospects of a trend reversal for the stock.

"There has been an upward trend in earnings estimate revisions for UNP lately, which can certainly be considered a bullish indicator on the fundamental side.

"If this is not enough, you should note that UNP currently has a Zacks Rank #2 (Buy), which means it is in the top 20% of more than the 4,000 stocks that we rank based on trends in earnings estimate revisions and EPS surprises. And stocks carrying a Zacks Rank #1 or 2 usually outperform the market."

Meanwhile, on April 9 MarketWatch took the opposite view and said the constellation forming in UNP's "fundamental" galaxy was Ursa Major, the Great Bear. It wrote:

"After such a steep drop in the sector, J.P. Morgan's Ossenbeck said many investors have asked about how much downside was left, and what looks attractive after the selloff, but he recommended it's still better to cut bait than to bottom fish."

In turn, rather than magnifying the trend in UNP, the mainstream telescope obscured its view.

On April 14, our Trader's Classroom editor Jeffrey Kennedy found his Elliott wave radar set on Union Pacific Corp. There, he zoomed in on the stock's price chart and realized both the wave count and the technical RSI page had aligned to support one scenario moving forward. From Jeffrey's Trader's Classroom video,

"When you're scanning through price charts, 20 or maybe hundreds, you have to know what you're looking for... [Enter a classic Jeffrey metaphor about panning for gemstones in the North GA mountains, sifting through buckets of dirt, knowing the difference between a hunk of pyrite and real gold]

For UNP, Jeffrey identifies a potential bearish engulfing pattern and a complete five-wave rally off the 2020 low and says:

"If we're correct, this could give way to further and significant decline for the next 3 months." 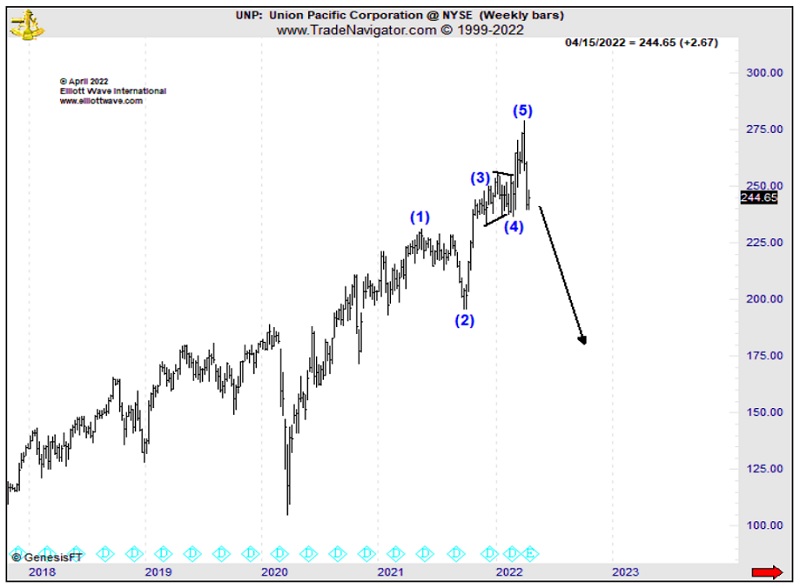 And this next chart shows what followed: UNP continued to decline, touching its lowest level in 10 months on June 17. 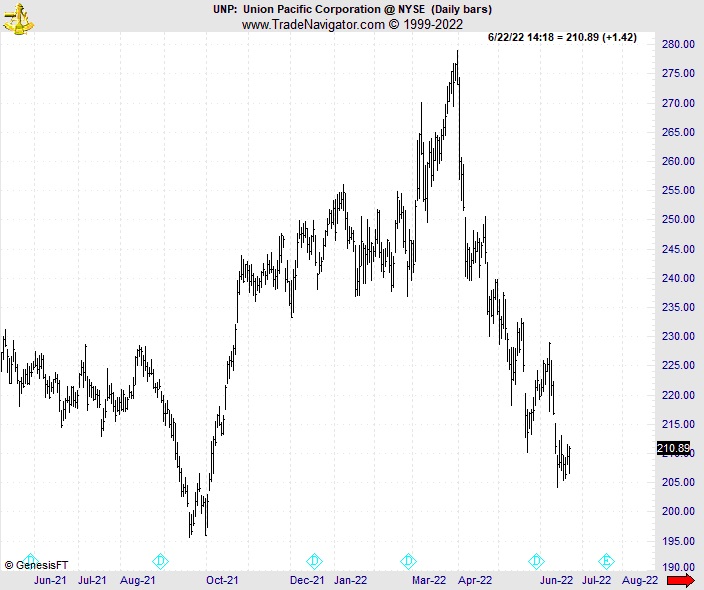 Of course, trading stocks carries risk, and not all Elliott wave interpretations of price action turn out to be correct. But you don't have to stab into the "fundamental" darkness. Elliott wave analysis can reveal objective patterns, much like constellations, in market price charts that light the way to potential opportunities.

See below to learn more!

Align Yourself with High-Confident Opportunities

Block Inc. NIO, Meta, Marvel, Netflix and more -- what do they all have in common?

Answer: They're all featured in the current June catalog of Trader's Classroom videos. In each one of these carefully crafted lessons, editor Jeffrey Kennedy walks you through every step of a high-confident setup, from wave count to confirming price action and the critical levels necessary to stay on the right side of risk. Defining the "Line in the Sand" of Opportunity -- In Focus, Block Inc.

A few months ago many analysts pointed UP for Block, after the company bounced from February lows. Yet the rally was short-lived: Now see the forecast that anticipated the downtrend. 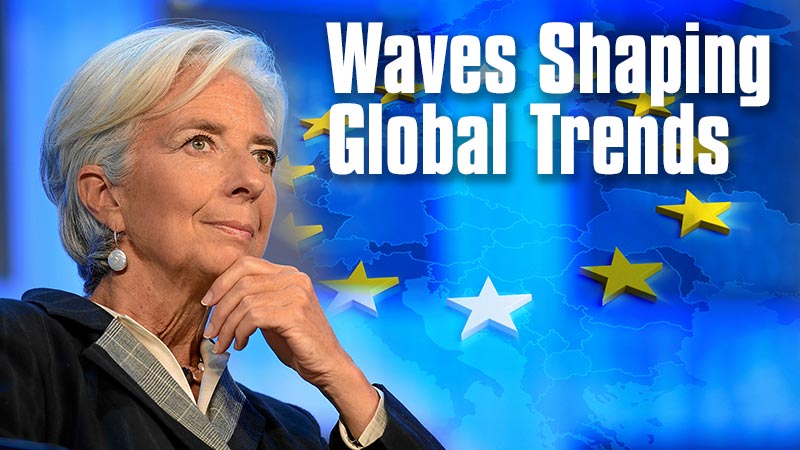 Bonds -- and interest rates -- have been making headlines for months. But while the focus has mostly been on the U.S. Treasuries, it's worth seeing how the waves are shaping trends overseas, too. Watch Interest Rates Pro Service editor show you how to apply the waves to Eurex Bund. 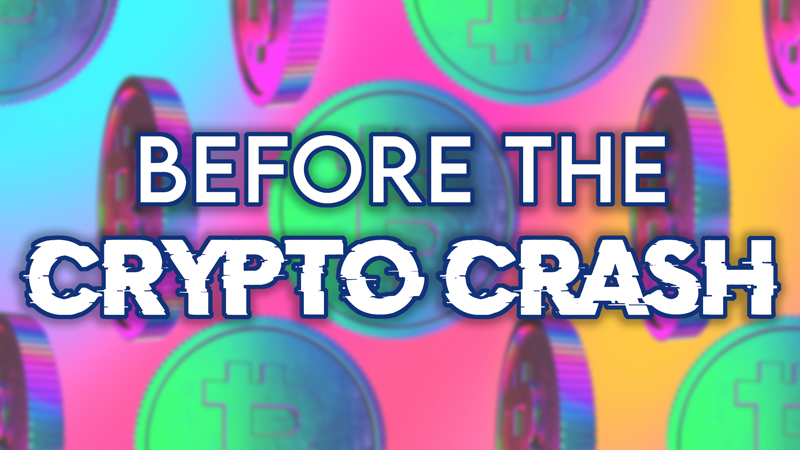