Elliott Wave Insights YOU Can Use

One of the most exciting wave setups you can spot on a chart is a third wave. Even more exciting? A third wave at multiple degrees.

“An extension is an elongated impulse with exaggerated subdivisions... In the stock market, the most commonly extended wave is wave 3.” – Section 1.6

Check out this EURJPY call from our Currency Pro Service analyst, Favio Poci, to see the power of third waves in action: 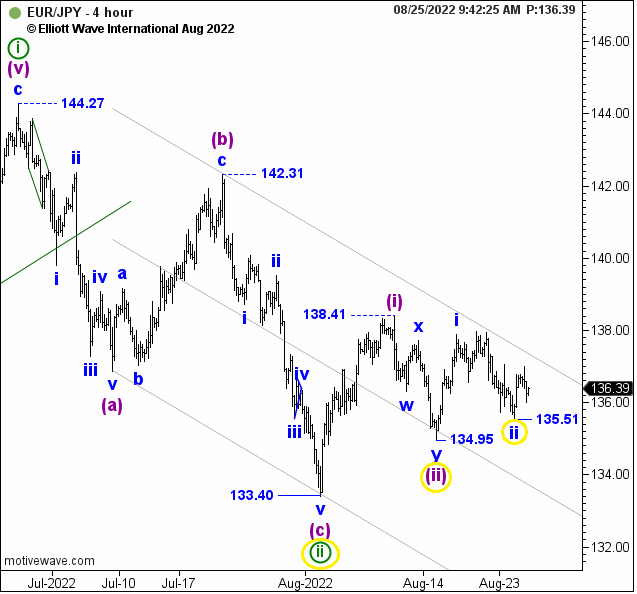 And here’s what happened next: 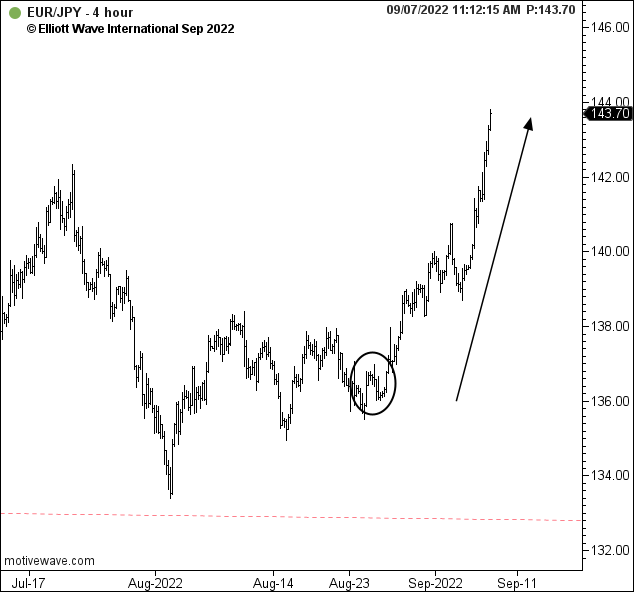 You've seen those moments on a chart when the price first swings wide, then less so, then even less... until -- boom! -- the market explodes higher or lower.

Elliott Wave Principle defines a triangle like this, "A triangle appears to reflect a balance of forces, causing a sideways movement that is usually associated with decreasing volume and volatility. The triangle pattern contains five overlapping waves that subdivide 3-3-3-3-3 and are labeled A-B-C-D-E."

What follows a triangle is where the real opportunity lies. "Elliott used the word 'thrust' in referring to this swift, short motive wave following a triangle." - EWP

Here's an example in Bitcoin: 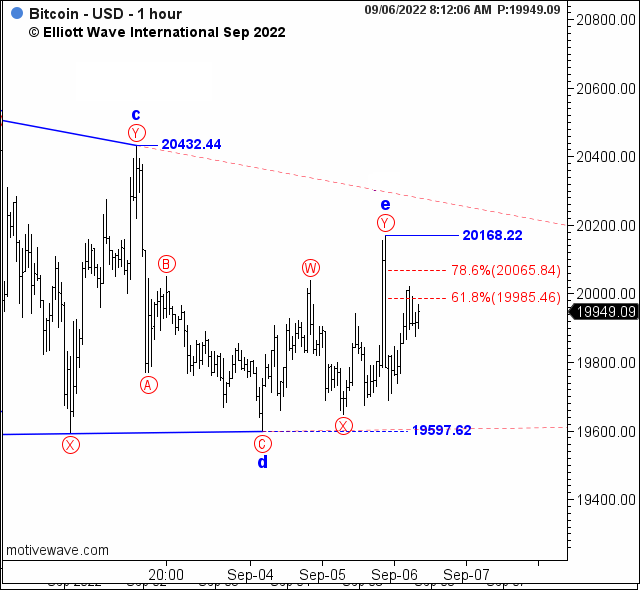 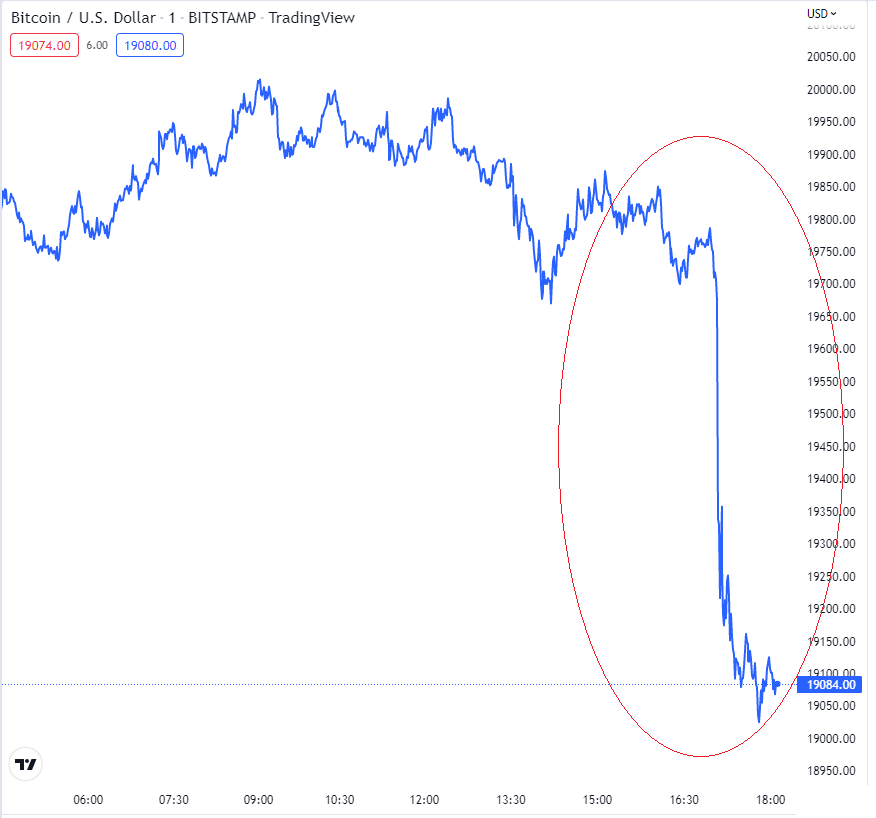 "One of the most useful shortcuts we learned quickly when we were first studying the details of the Wave Principle is to simply count the number of waves in a move to determine if it is an impulse or a correction. Impulse waves always subdivide as 5 waves, or (+4) 9 waves, or (+4) 13 waves. Corrective waves subdivide as 3 waves, or (+4) 7 waves, or (+4) 11 waves, unless it is a sideways triangle. It’s a quick way to peruse many charts without having to spend time delving into the variants of the subwaves to determine which of the waves is the extended one." 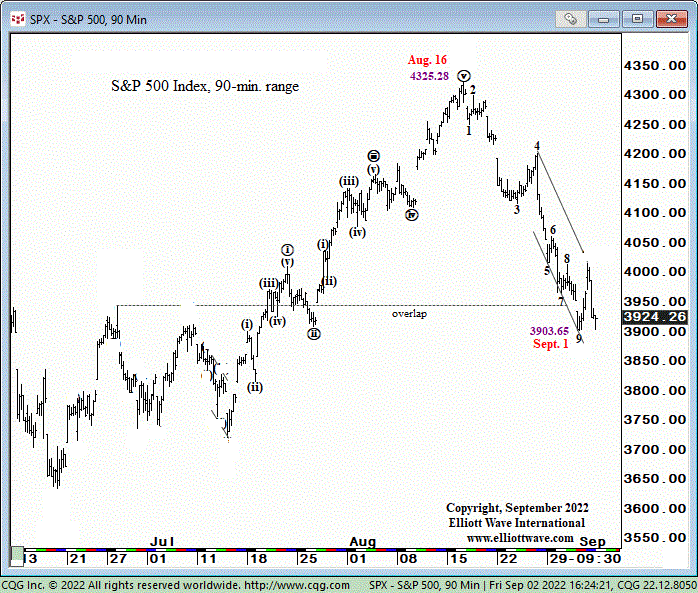 "Third waves are wonders to behold. They are strong and broad.

"They usually generate the greatest volume and price movement and are most often the extended wave in a series."

Our new, August Global Market Perspective identifies 33+ potential 3rd-wave setups -- across multiple global sectors. They are either just starting or are about to. 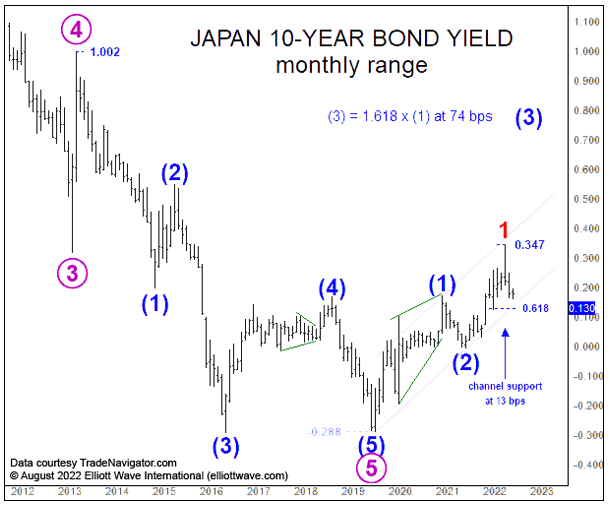 Read the August GMP instantly, then on September 2nd get updated analysis on these markets and more.

Want to learn more about the power of third waves? Get your free digital copy of Elliott Wave Principle.

And now AMAZON Falls Into The Gap — And Then Some!

Third waves normally contain the strongest price action and, therefore, it’s common to see price gaps like the one AMZN experienced in late April. And, just like Billy Mays told us for years, “But wait, there’s more!” Here’s how Jeffrey Kennedy used where gaps usually occur in a wave pattern to foresee the NEXT 400 points down in Amazon.

Trader’s Classroom subscribers received this on 5/5. The most recent TC lessons include analysis of NFLX, AAPL, SBUX, JPM and more. Get instant access now. 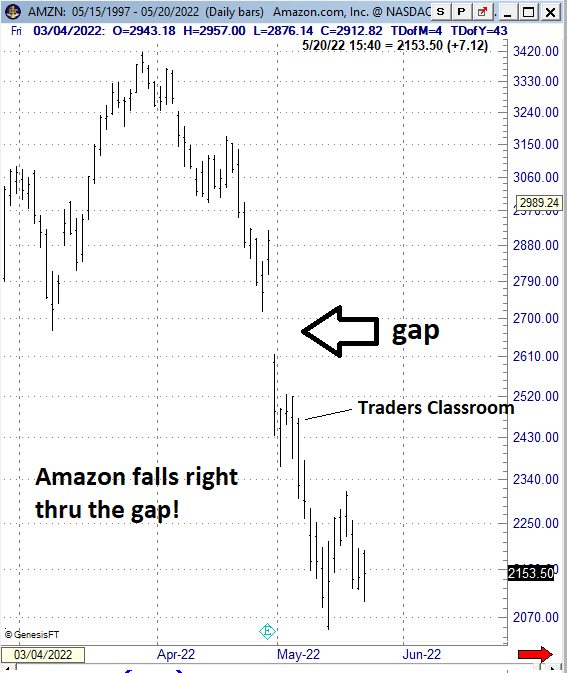 Want to learn more tips on how to use Elliott to trade? Get your free copy of Elliott Wave Principle.

MAN! This is Good Stuff!

As our Senior Trading Instructor mentions in the Crypto Trader’s Classroom video below, “Whenever I’m labeling a price chart, I always start simple, and if necessary, move to a complex pattern. I always start with the 5 core Elliott Wave patterns.”

He explains why that’s important using an example in the altcoin Decentraland (MAN).

Want to learn more tips on how to use Elliott to trade cryptos? Check out our free resource, Crypto Trading Guide.

The Essence of the Elliott Wave Principle

Did you struggle with math as a kid? Interested in technical analysis, but not exactly quantum mechanics material?

Can you count to five? Do you know the alphabet through the letter C?

Well, look no further. Have we got a methodology for you. 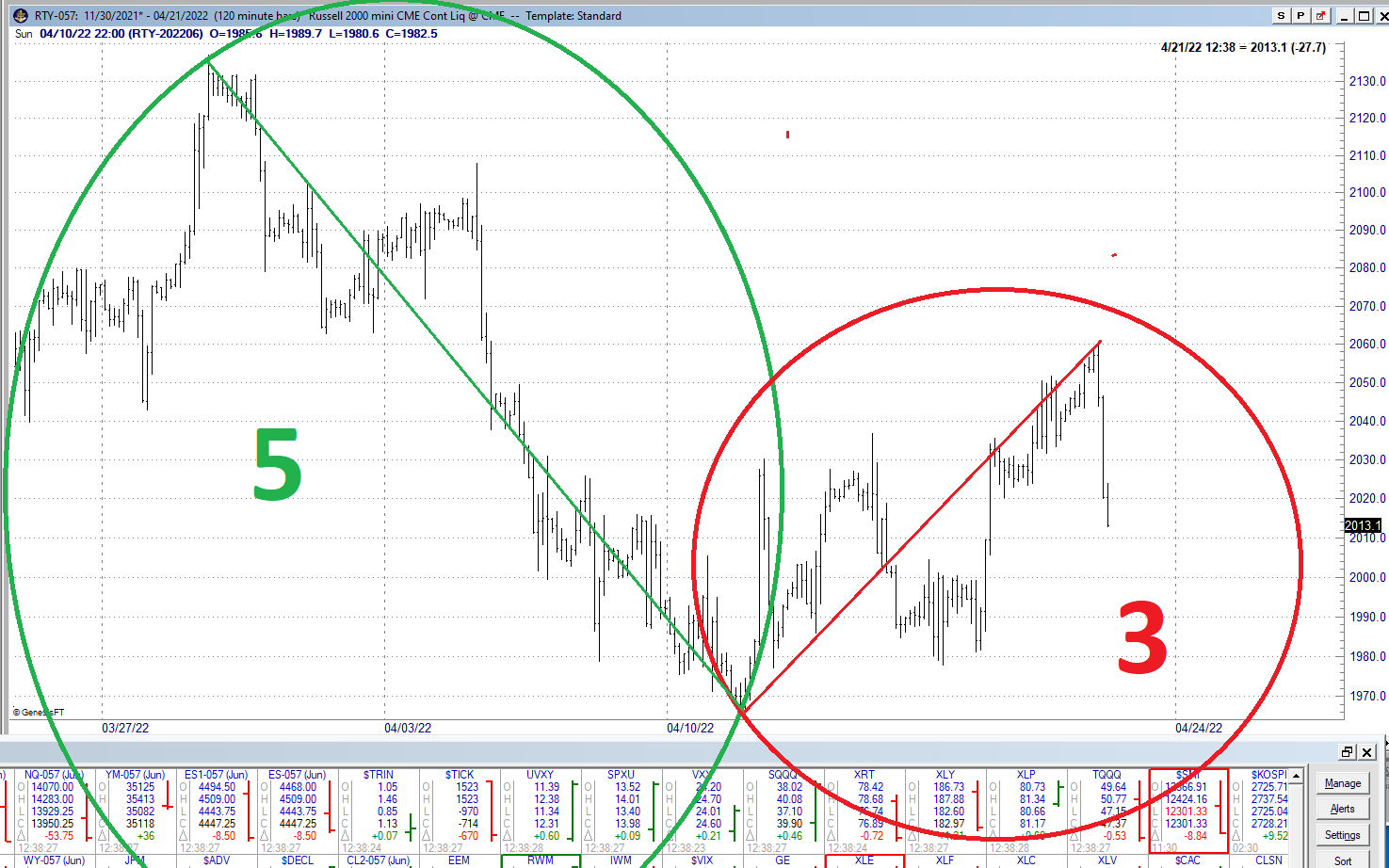 Earlier today, one of EWI’s analysts sent this seemingly enigmatic phrase to two other EWI analysts. But it’s not enigmatic at all, it very specifically indicated that the market was about to reverse. (Said market promptly dropped over 1.5% in the next couple hours.) That’s great if you get the lingo. If you don’t, but you’re ready to be one of the cool kids, here’s a resource you should check out - and it's free! Elliott Wave Principle >> 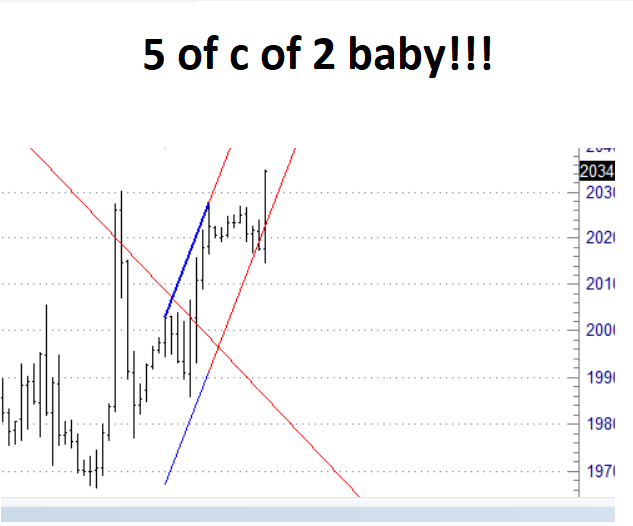 Elliott Wave Principle says this about the depth of corrective waves: “The primary guideline is that corrections, especially when they themselves are fourth waves, tend to register their maximum retracement within the span of travel of the previous fourth wave of one lesser degree.”

Now, check out this chart of Costco (COST) - as posted in our Flash Services. See that large grey-ish wave 4 over to the right? Now train your eye back to the left. See the red 3 and the red 4? (How can you not with the convenient lines we’ve added?) That’s the “span of travel of the previous fourth wave of one lesser degree.” Or, as they say in France, voila!!

And hey, as long as you’re at the store, grab me a few cases of something. I don’t care what; I just love volume discounts! 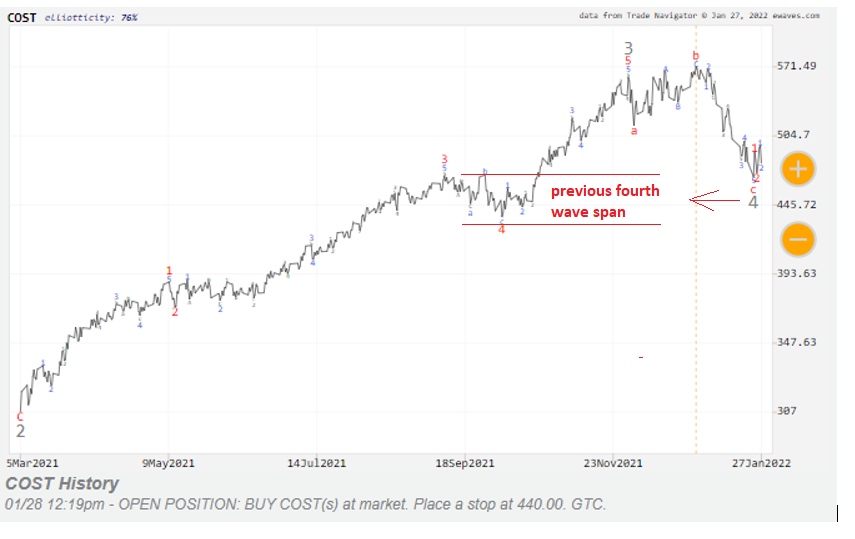 Fall into the GAP!

Here are two great examples of gaps occurring in one of the three most common places they are found – in the middle of third waves. (Chart courtesy of our U.S. Intraday Stocks Pro Service.) 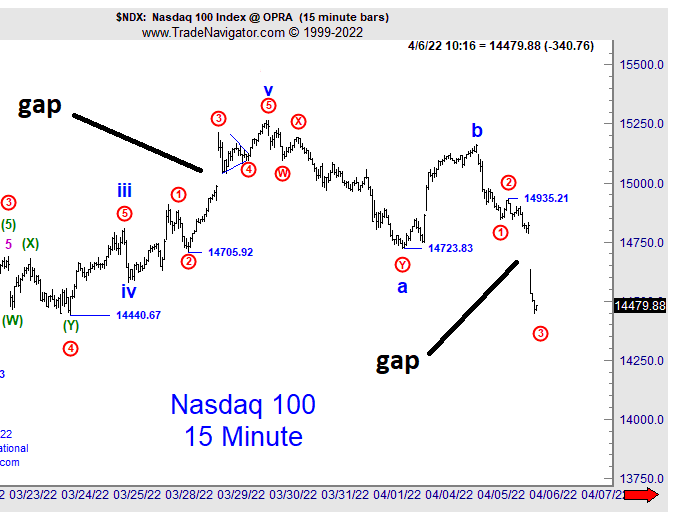 Know the other two most likely places that gaps occur? Maybe you need some more education! Read this - FREE: Elliott Wave Principle.

We have a tendency as investors/humans to overcomplicate things. Elliott waves are no exception.

While it takes time to truly master the intricacies of Elliott, you can learn to spot Elliott wave patterns right away.

There are three types of corrective wave patterns: zigzag, flat or a triangle.

Today, we’ll zero in on the corrective pattern with a funny name: the zigzag.

Here is a description from the benchmark for Elliott waves, Elliott Wave Principle:

A single zigzag in a bear market is a simple three-wave rising pattern labeled A-B-C. 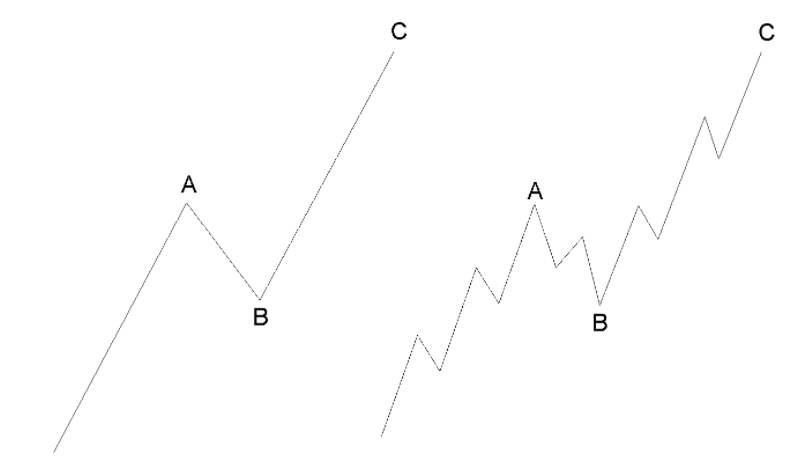 And here’s a real-market zigzag example in silver from our March 28 Short Term Update. 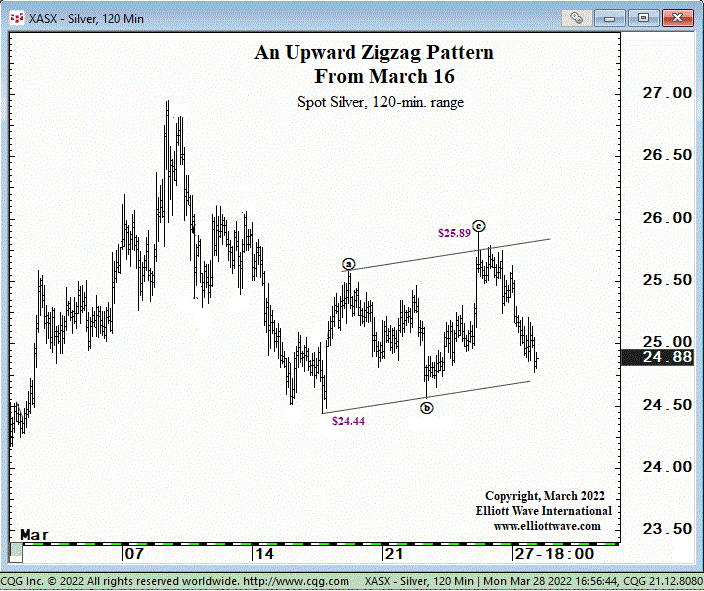 Your Next Step: Learn how to spot patterns in your charts with FREE access to Elliott Wave Principle.

Well, we're glad you asked because we just happen to have a great example right here!

Here's a picture in the Nasdaq from our Pro Services Stocks Intraday Services. 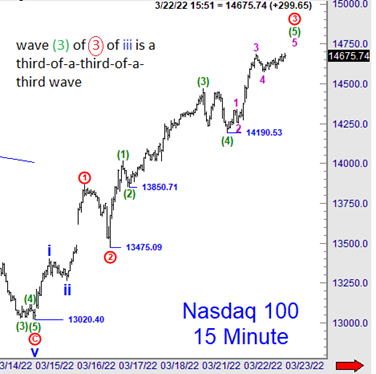 Update: 3/23/22 1:03pm
Here's another timely example of third-of-third waves at multiple degrees. This time in Cardano from our Crypto Pro Service...

03/18/22 12:30 PM ET (Last Price 0.85): Trend remains up from 0.75. Within that context but at rather short term very small wave degree as long as 0.82 nearby structural support remains intact, the existing preferred wave interpretation firmly favors price "going up a whole bunch real fast", doing so in a robustly third-of-third fashion at four wave degrees of significance.. Said another wave, that's a bevy of coiling one-two's poised to be unleashed with rather impressive impulsive buying pressure... if 0.82 structural support earns respect very near term. - Al Graham for Jim Martens 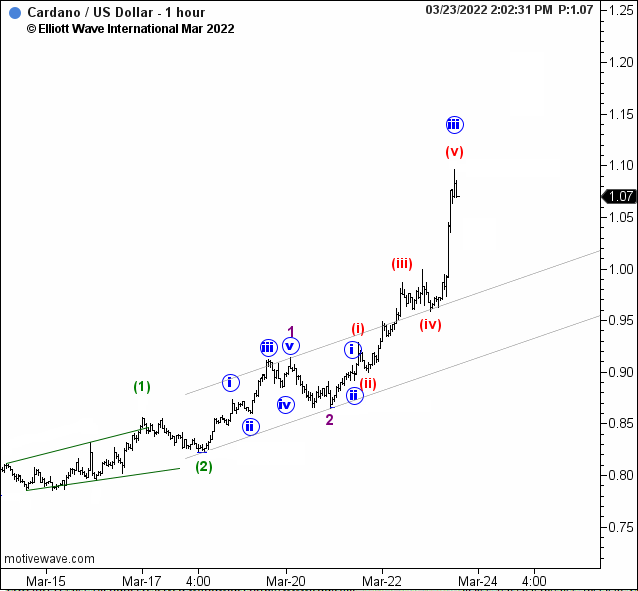 
Your Next Step: Read how to spot thirds-of-thirds on your charts. It's all in Section 1.1 of Elliott Wave Principle. And it's free. 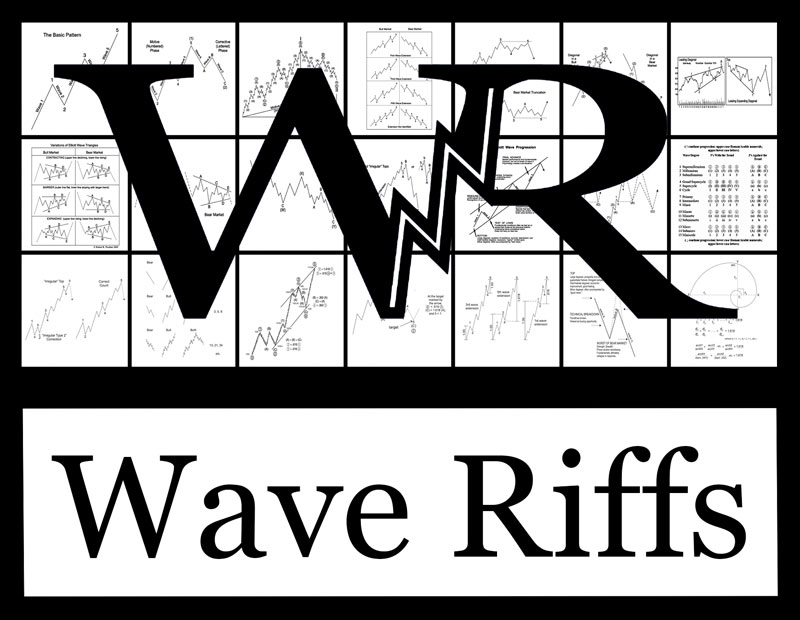 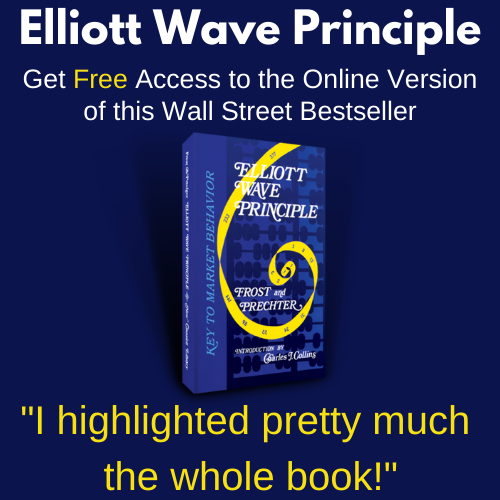 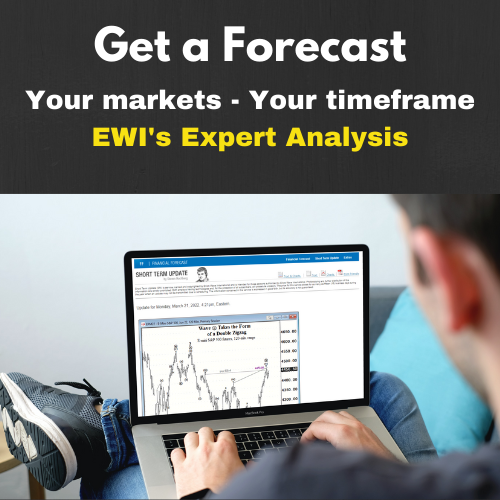