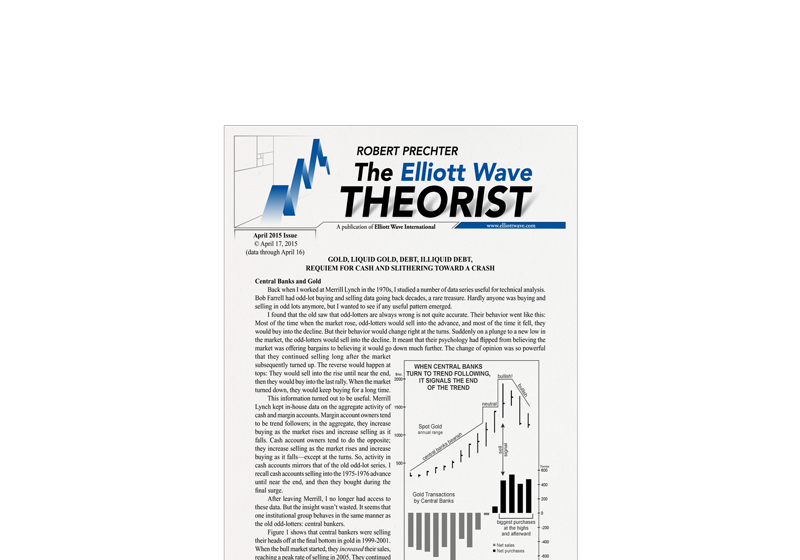 $37for your first month,
billed quarterly after

You may cancel anytime – and get a pro-rated refund for any unused months.

In 1975, Robert Prechter joined Merrill Lynch in New York as a young technical market analyst. That's where he first heard about Elliott wave analysis -- and was deeply intrigued.

Prechter decided to read the original works by R.N. Elliott, first published in the 1930s. It proved to be a difficult task, because the originals were not even in the Library of Congress. Prechter finally dug around in the New York Public Library and found a copy of Elliott's books on microfilm.

When he began reading, Bob says he "was amazed to find that there was a wealth of information that had been lost to Wall Street." You see, by the time Prechter discovered Elliott's work, the material was largely forgotten.

Most importantly, Elliott's 1934 groundbreaking study carefully showed that stock market trends were not random but patterned. After Prechter re-discovered the method in 1975, he immersed himself in the wave theory and its impact on the markets and on society at large.

In 1979, Prechter left Merrill Lynch and published the first issue of the Elliott Wave Theorist. One of his early forecasts called for a long-term "super bull market."

That was in the early 1980s, when the DJIA was bouncing around at about 777. Bob's bullishness was completely against the profoundly bearish Wall Street consensus. Then came the huge bull market of the 1980s -- which more than delivered on Bob's bullish forecast.

In 1984, Prechter surprised the skeptics again when he won the U.S. Trading Championship with a 444% return in a monitored options trading account, which was a record at the time. As Bob's following grew, Financial News Network (now CNBC) named him "Guru of the Decade" for the 1980s. Reporters even said that Prechter's forecasts would single-handedly "move" the markets!

Bob still chuckles at that, because, as Elliott Wave Theorist subscribers know, prices are the result of waves of investors’ psychology -- not any single person. Bob Prechter writes and edits each issue of the Theorist himself. You can expect a new Theorist around the middle of each month. The specific topics vary -- and are almost always a surprise. As he puts it, a given Theorist contains the information and analysis he thinks his subscribers need to know right then.

Over many years, Prechter has expanded R.N. Elliott's original theory beyond the markets, into the field known as socionomics, the study of social mood and its impacts.

In fact, some of the most interesting Theorists focus on how the same social mood that drives the markets also impacts our culture, politics and social life.

Often, Bob times a new Theorist with an important juncture in the markets. And between monthly issues, you get occasional "Interim Reports" -- which Bob releases when there is an urgent market development to update you on.

Every new Theorist is a compelling read, which explains why it continues to gain new fans every year.

Original, thought-provoking insights -- on your screen, once a month Elliott Wave Theorist subscribers are a discerning crowd. They look forward to setting aside 20 minutes each month -- and having their thinking expanded and, often, challenged.

Every new Theorist is 10 pages you'll look forward to reading each month.

Most subscribers get The Theorist as part of our comprehensive investor-focused Financial Forecast Service. You can also subscribe to it by itself, at a still-affordable premium.

EWI's 25+ analysts are featured on financial channels including