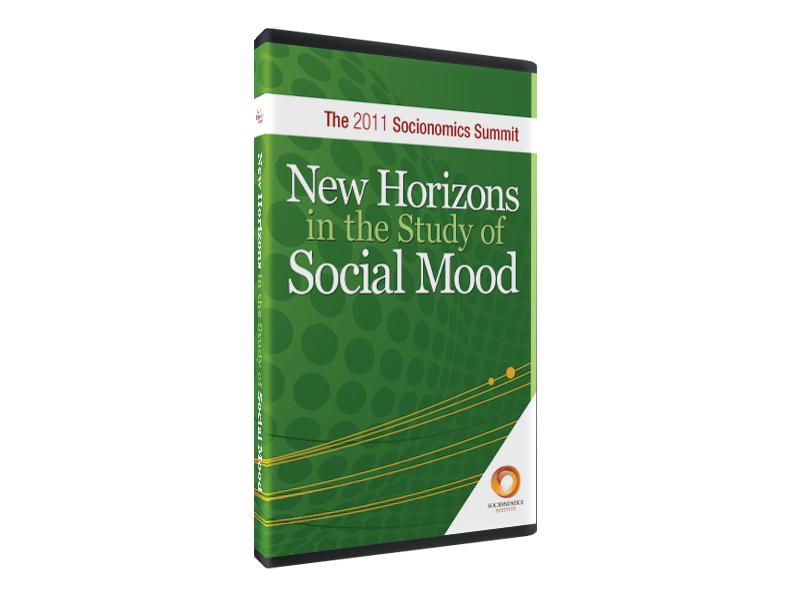 New Horizons in the Study of Social Mood

This on-demand video gives you all the compelling developments in socionomic theory and application presented at the 2011 conference. Enjoy at your convenience, and at your own pace.

The Socionomics Institute held its first-ever Summit, New Horizons in the Study of Social Mood, in April 2011, and what an event it was.

As Jim B. of Texas described it:

The Socionomics Summit was a great way to introduce people to the true way to look at social mood and its impact on markets, government, music. ... I would recommend it for people serious about learning the true power of mass human psychology.

You can experience every engaging moment the packed-house audience saw and heard during the April 2011 Socionomics Summit: each one of the 12 speakers; all of their charts, slides and handouts; plus the Q&A sessions between the speakers and audience. This first-ever socionomics conference was professionally recorded and is available in a high-quality streaming video format.

The on-demand video includes all five action-packed hours of the Summit as attendees experienced it. Yet in a real sense, the video promises an educational encounter that is better than the one attendees received in person. You can watch and listen at your convenience, and you'll appreciate the ability to re-watch the fast-paced sessions as often as you choose.

Here are just some of the speakers and their topics: